The Daily Northwestern • May 12, 2016 • https://dailynorthwestern.com/2016/05/12/ae/production-of-waiting-for-dillo-explores-diverse-experiences-of-northwestern-students/ 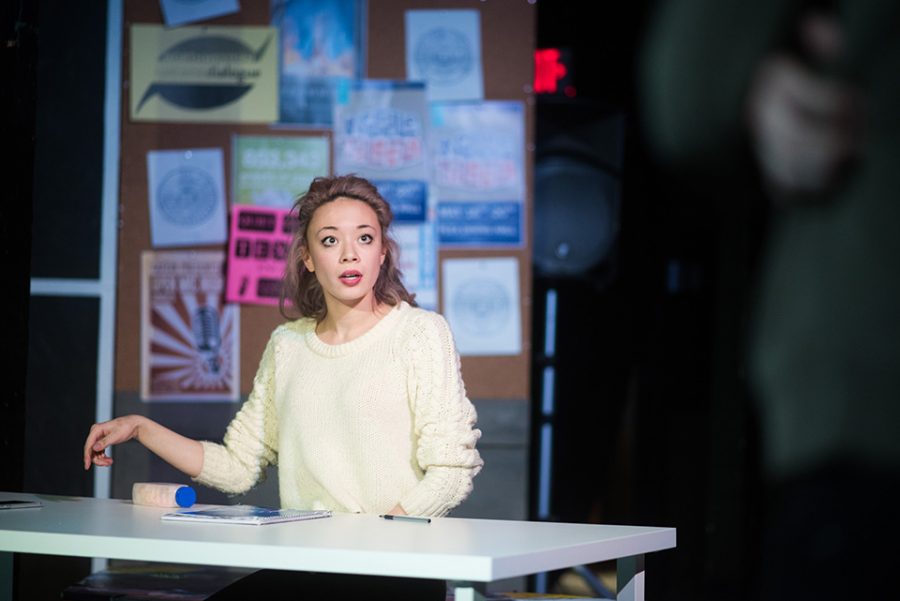 A student rehearses for “Waiting for Dillo,” the first annual production of Project NU, Spectrum Theatre Company’s new community-based initiative. The show drew material from interviews with nearly 70 students from all areas of campus.

It’s week eight, and one student is focused on completing an essay while another is working to finish a group project before Dillo Day that Saturday.

These are just two of the nine characters that will be featured in the upcoming play “Waiting for Dillo.”

The play, which will show at Shanley Pavilion from Thursday through Saturday, is the first production from Spectrum Theatre Company’s Project NU, a community-based theater initiative.

The play’s head writer Pauline Moll, a Communication sophomore, said Spectrum launched the initiative last spring because the board has historically produced shows addressing big global issues and wanted to produce something that would hit closer to home.

“They thought what better way to respond to the campus’ needs and wants and what dialogues are happening here than to write it from the inside out,” Moll said. “And so they came up with Project NU.”

The plot follows nine Northwestern students of different years, majors and gender identifications each day of the week leading up to Dillo Day 2016. Although, Dillo Day is an experience all of these students share, they each want something different out of it.

“It’s got heart and it’s got spunk and we had no idea what this thing was and we built it out of nothing from listening and saying yes to people who told us their stories and putting them onstage,” director and Communication junior Jenna Perlstein said. “And that’s really incredible no matter how it turns out.”

In the early stages of Project NU, the team focused on research, speaking with professors about interview strategies to find the best ways to go out into the community and listen to people’s stories, Moll said.

The project’s outreach coordinator Zach Barr, a Communication junior and a former Daily staffer, said he scoured every corner of campus by contacting leaders of student organizations and searching housing rosters to find widely diverse interview subjects, Moll said. The Project NU team conducted nearly 70 interviews in the fall during which they discussed people’s experiences at NU in contrast to other places they’ve lived, she added.

In January, the writing team started working on a script for a narrative fictional play based on the material collected during the interview process. Throughout, they faced a lot of trial and error as they struggled to find the right topic to convey the duality of varied experiences within one common experience specific to NU, Moll said.

“We were searching for things that are ‘typical Northwestern’ because our architecture isn’t unified (and because of) certain things like the north-south divide, it’s really hard to find something that’s that one Northwestern thing,” Milinazzo said.

Given the show’s date the week before Dillo Day, the writers decided to center it around the annual event since it’s an event that affects everyone on campus in one way or another, Milinazzo said.

Before the script was finalized, the director and cast spent a week doing personal research and character building through activities such as visiting places on campus that were significant to each cast member, Perlstein said. She added that creating this dynamic of awareness and empathy in the rehearsal room was imperative if they wished to convey that theme to their audience.

Moll said she hopes people see some of themselves in the show but also understand perspectives they’ve never encountered before.