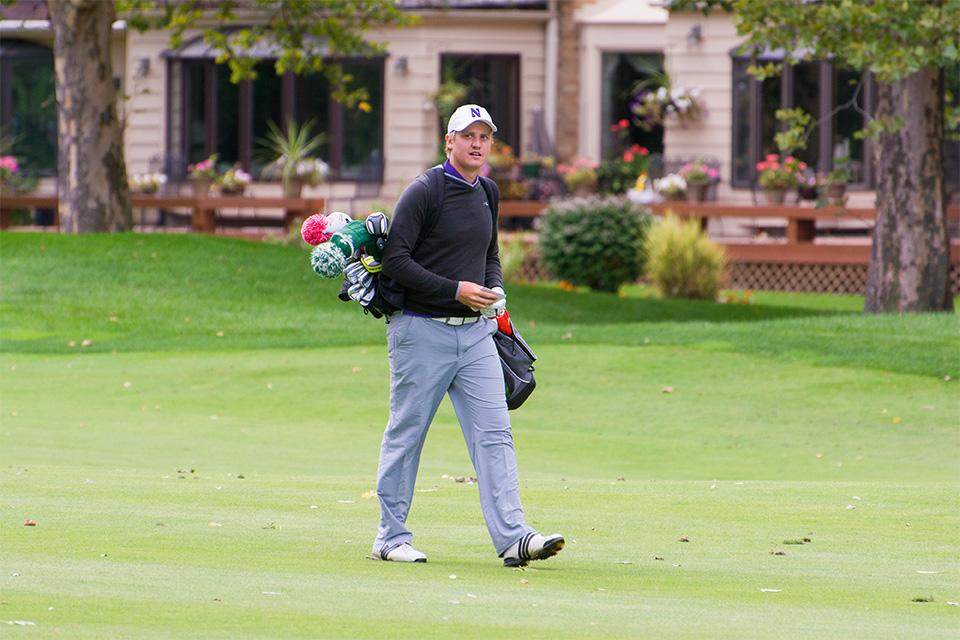 Josh Jamieson walks across a golf course. The NU senior is looking to finish his collegiate golf career strong, as the Cats prepare for the NCAA Tournament. (Daily file photo by Nathan Richards)

Josh Jamieson walks across a golf course. The NU senior is looking to finish his collegiate golf career strong, as the Cats prepare for the NCAA Tournament.

Senior Josh Jamieson has been around the game of golf for his whole life, but he will be walking away from competitive play soon.

Jamieson, who grew up around golf in St. Andrews in Scotland, has been playing almost since birth. Now he looks to wrap up his college career by leading the Wildcats in the NCAA Regional Tournament in Stillwater, Oklahoma later this month, with eyes on the NCAA Championships in Eugene, Oregon.

“There’s not much else to do in St. Andrews than play golf, so you might as well,” Jamieson said. “I always kind of joke that growing up in St. Andrews, the level I’m at is maybe the worst I could be, because you’ve got so many great facilities and great courses around, so if you put in any kind of effort you’re going to end up a pretty solid player.”

This self-assessment, however, may be a bit harsh. Plenty of Scottish players have the opportunity to play St. Andrews, but not all of them have birdied all 18 holes on all seven courses around the area. Jamieson said he believes he finally completed this quest a few years ago when he birdied the famous Road Hole, No. 17 on the Old Course at St. Andrews.

“It’s not easy,” Jamieson said. “I just kind of figured that after I’d done that, I’d done it all. I wasn’t really sort of keeping count, but I could picture myself having done it on every hole other than that. I knew that I hadn’t birdied 17 until recently.”

Birdieing the Road Hole isn’t Jamieson’s only accomplishment from his time as a junior golfer in Scotland. He also won the Scottish Boys’ Strokeplay Championship at age 17.

The victory opened up new doors for Jamieson, who was soon recruited to Northwestern by then-assistant coach David Inglis, a fellow Scotsman who Jamieson already knew of after his impressive amateur career in Scotland.

“At that point he still wasn’t sure if he was going to come to the U.S. or not,” Inglis said. “Having watched him initially and talking to his coach I really tried to do my best to convince him that coming to the U.S. and playing at Northwestern was the best option for him.”

In addition to the possibility of playing for Inglis and then-head coach Pat Goss, Jamieson was enticed by the opportunity to get out of his comfort zone and take advantage of all the opportunities that college sports in the U.S. had to offer.

Jamieson also learned some surprising family history in his journey to NU.

“My grandmother actually grew up in Evanston, which we didn’t know until we looked into it a little bit more,” Jamieson said. “She grew up on Library Place, just opposite campus. I walk past her house every day, it’s kind of a crazy coincidence.”

Although his grandmother no longer lived in Evanston, Jamieson did have have someone else who he could look to for close companionship as he transitioned to life at NU.

Jamieson’s freshman roommate was fellow golfer Andrew Whalen, and the two got along well enough that they reunited to live together again senior year. As the only seniors on the roster, the two are now attempting to lead the Cats to the team’s first NCAA Championship appearance since 2011.

If NU is to achieve that goal, it is going to need some of the impressive ball-striking Jamieson has demonstrated throughout his college career.

Jamieson has turned in clutch performances in the past, including a record 6-under par 29 on the back nine of the Gifford Intercollegiate during his sophomore year, the only 29 in program history.

That round powered NU into the final group with then-No. 1 Alabama on the final day, giving the Cats a shot at the tournament title.

“I’ll probably never replicate that again, but that was certainly cool,” Jamieson said. “There’s been a few good rounds and a few good memories playing, but that one probably sticks out.”

By his junior year, Jamieson was a member of the team’s lineup at every tournament, and led the squad in four of those tournaments.

His senior year has been more up-and-down than previous years, but he again came up clutch at the Big Ten Championships, shooting three straight even par rounds to help NU tie for sixth and earn the regional bid.

“I’ve got it going a few times,” Jamieson said. “I’ve played really well at times, but I’ve not really finished it off this year, for one reason or another. There’s been a lot of really solid rounds, but nothing too flashy, sadly, this year, which is what I’ve kind of been missing.”

Although Jamieson may not have turned in a singular special round this year, he has performed an impressive turnaround. After struggling to begin the year, he has finished in the top-20 in his past four tournaments, including the Big Tens.

For Jamieson, this year has been about more than just golf though — it’s also about enjoying his final year of college with his friends.

“You can be anywhere in the world, you can be in San Antonio, which is a horrible place,” Jamieson said, “but you’re with some of your best friends in the whole world, and it’s all been amazing. It’s been an unbelievable experience, and it’s the whole package really.”

Unlike his former teammate Matt Fitzpatrick, Jamieson will not be turning pro, instead opting to pursue a career in sports management.

Just because his competitive career is ending, however, doesn’t mean Jamieson will be walking away from the game he has loved since he was a boy in Scotland.

This story was updated at 6:20 p.m. to clarify the men’s golf team appeared in the NCAA Championships in 2011.