The Daily Northwestern • May 9, 2016 • https://dailynorthwestern.com/2016/05/09/sports/softball-northwestern-rises-to-the-challenge-sweeps-purdue-to-finish-500/

Softball: Northwestern rises to the challenge, sweeps Purdue to finish .500 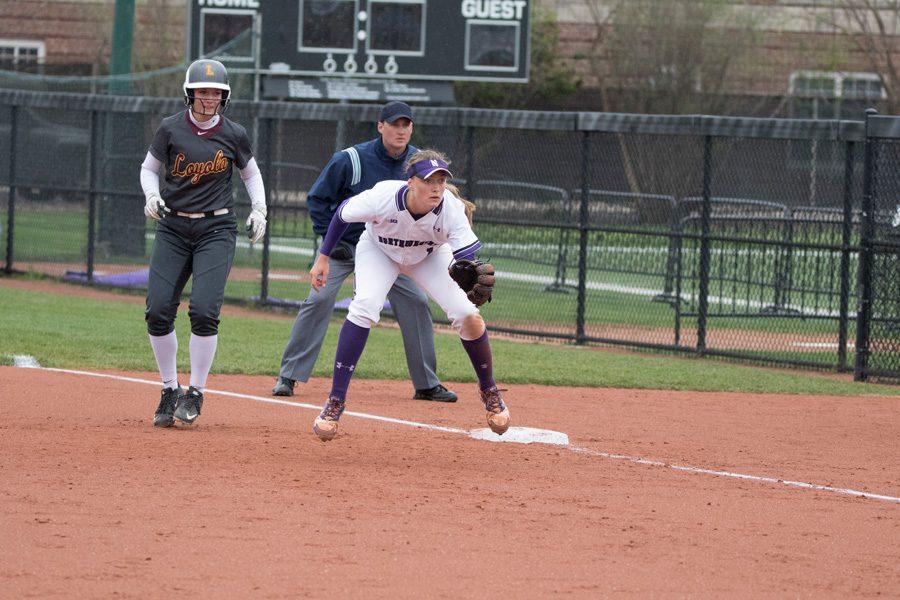 Alcy Bush holds a runner on at first base. The junior has one of the Wildcats’ five triples this season.

Northwestern left West Lafayette, Indiana, with what it came for: a sweep of Purdue and a .500 record.

The weekend was all about the pitching for the Wildcats (25-25, 15-8 Big Ten) as they beat the Boilermakers (27-27, 8-15 Big Ten) at their own game. Purdue came into the weekend third in the Big Ten in ERA and touting one of the best pitchers in the conference in senior Lilly Fecho.

It wasn’t that Fecho, who started Friday’s and Sunday’s games, was bad against the Cats; NU’s pitching staff was simply better.

Friday’s game featured the Cats’ potent senior duo of Kristen Wood and Amy Letourneau in the pitcher’s circle. Wood got the start and was solid, giving up 3 hits and no runs in three strong innings of work. Letourneau relieved her and was even stronger, pitching four innings, giving up 1 hit and no runs while striking out five.

But Fecho lived up to her reputation, pitching a complete game and striking out nine. The game was still scoreless at the top of the seventh when senior shortstop Andrea Filler broke open the game.

The Cats’ pitching staff again dominated Purdue’s mediocre lineup Saturday, as it not only shut out the Boilermakers but also no-hit them in the process. Wood, freshman Kenzie Ellis and Letourneau tore through the Purdue hitters, only walking two in seven innings.

The opposing pitcher, sophomore Gina Snyder, was impressive in her own right, fanning ten Cats while pitching a complete game. But once again, Filler and the seventh inning were the Boilermakers’ undoing. Filler corked a long home run to center field in NU’s half of the inning, scoring the lone run of the game.

In the final game of the series and the regular season, the Cats captured an early lead and never relinquished it. This time, the Cats’ offense came through playing small ball, instead of Filler muscling her way to a win. An RBI groundout by sophomore catcher Sammy Nettling, a throwing error by Purdue’s catcher Kaylah Hampton and another RBI groundout by Letourneau supplied NU all the offense that Ellis and Letourneau would need. The duo would beat Fecho again, despite Purdue’s ace pitching her second complete game of the weekend.

The weekend sweep of the Boilermakers not only kept Northwestern’s NCAA Tournament hopes alive but boosted the Cats to third place in the Big Ten, giving them a first round bye in this week’s Big Ten Tournament.

The tournament, which is being hosted by Penn State this year, is the Cats’ last opportunity to prove to the NCAA Tournament Selection Committee that they belong in the field. The team will face the winner of Thursday’s game between Ohio State and Rutgers on Friday.

A win on Friday will extend the Cats’ season to Saturday, when they would need to win two more games to clinch the Big Ten Tournament Title and an automatic bid to the NCAAs. A loss on Friday, however, will most likely mean the end of NU’s season.