The Daily Northwestern • May 9, 2016 • https://dailynorthwestern.com/2016/05/09/campus/dialogue-centers-on-low-income-students-mental-health/ 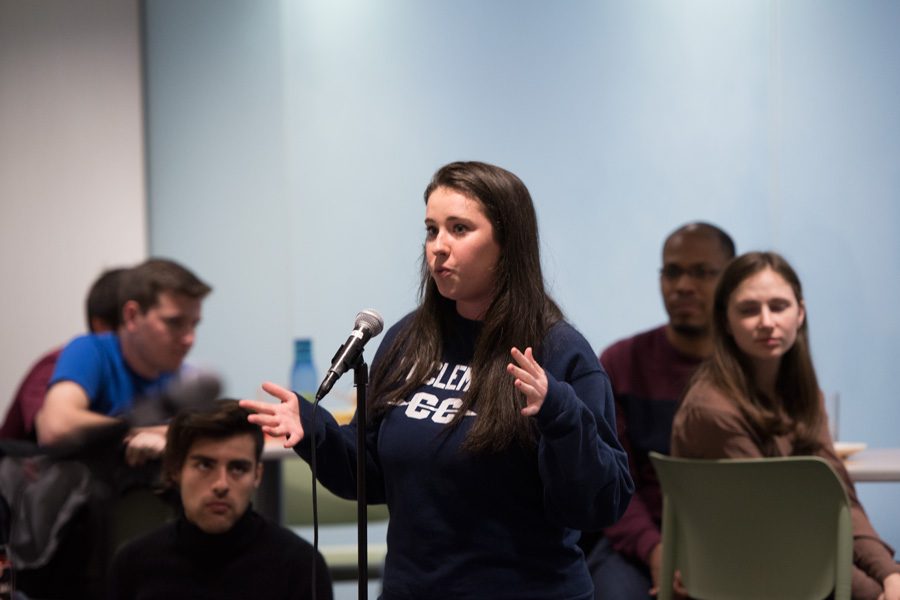 As a low-income freshman, Communication senior Amanda Walsh said she felt “oppressed” on campus. And although she appreciates the new resources Northwestern has created for low-income students, she told administrators assembled at Allison dining hall that there’s still work to be done.

Some students said although the University offers resources to low-income and first-generation students, there still exists a culture of privilege on campus.

Lesley-Ann Brown-Henderson, executive director of Campus Inclusion and Community, said Student Enrichment Services was created to serve the needs of low-income students. She also said the University is working to make students and faculty recognize that not all students come from similar economic backgrounds. For example, she said, some cannot afford to go out to dinner with their peer adviser group.

Later in the event, students expressed concerns over mental health on campus, saying the University’s intense academic culture needs to change. Patricia Telles-Irvin, vice president for student life, said administrators recognize the pressure felt by students and are working to train more faculty, staff and students on understanding and responding to issues of mental health.

“I need your help,” Telles-Irvin said. “I need students’ help to understand and convey this message more clearly: that you are already so talented, that you have great gifts and you don’t have to go beyond this call of duty to think that somehow you have to be perfect … or that you have to be involved in so much to make yourself a better person.”

But McCormick junior Laurelle Banta said with current academic culture, even the baseline norm is too much.

“It’s not the five classes or the five organizations,” said Banta, who drew sustained applause for her comment. “It’s the basic four classes or the three classes and one organization that’s the issue. Doing the bare minimum is too much. It causes too much stress doing what you should be doing on a basic level.”

Banta told The Daily that compared to previous community dialogues, Monday’s discussion was more productive. With more people in attendance and more opinions voiced, the group was able to discuss issues important to students, she said.

Nim Chinniah, the University’s executive vice president, said the event was structured without presentations, unlike the previous three, so administrators could hear more opinions from students.

“It was extremely well attended, and the conversation was great,” Chinniah told The Daily. “We’re going to go back over the summer to see how to continue the dialogue and work with (students) and move forward.”