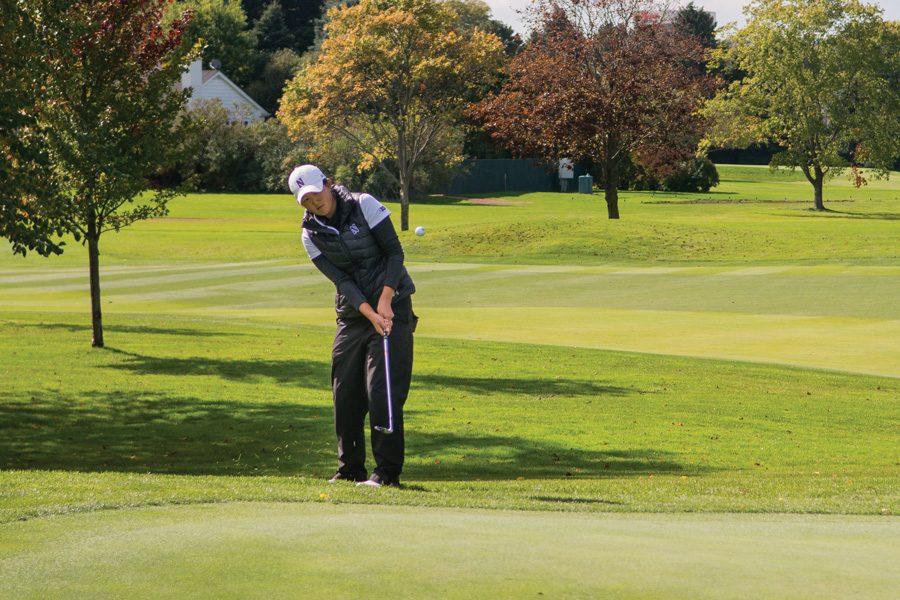 A Northwestern golfer chips her ball onto the green. The Wildcats won their regional by 18 strokes.

After their Big Ten Championship victory in April, the main question facing the Wildcats was whether they could match the play of teams across the nation heading into the NCAA Championships.

Their 18-stroke victory at the NCAA Regional in Shoal Creek, Alabama, answered that question with a resounding yes.

“It was a great three days,” coach Emily Fletcher said. “The girls played amazing. They just kept fighting all week. The golf course was very, very difficult, and they just lapped the field.”

As the team dominated the field, the individual championship came down to the wire with freshman Janet Mao sharing the title with Florida State junior Matilda Castren and California freshman Marianne Li. All three finished at 4-over par.

This is only the third tournament where Mao’s score has counted toward Northwestern’s team total, and the Cats have won two of those three.

“It was really exciting,” Mao said. “I wasn’t expecting it at all. I was just hoping to play well and contribute to the team, and it was really a pleasant surprise.”

Mao wasn’t the only one with strong play this weekend, as junior Kacie Komoto finished only 2 strokes back of the leaders in fourth place, while sophomore Sarah Cho tied for ninth and freshman Stephanie Lau claimed 14th.

Big Ten Player of the Year sophomore Hannah Kim was the only Cat who didn’t finish in the top 20, tying for 36th after shooting 16-over on Friday.

Although NU finished the tournament an unflattering 23 strokes over par, its score was significantly better than second place Florida State, which shot 41-over. The Jack Nicklaus-designed course gave all teams problems, as last place Alabama State finished 142-over par.

“It was a tremendous venue, really a spectacular place and amazing conditions, just really difficult,” Fletcher said. “It was a really long course. There were severe greens, fast greens, windy conditions. You name it, they had it.”

Despite the difficulties, the Cats provided a plethora of stats proving they were easily the best team in Alabama.

NU’s three rounds were the best played by any team at the tournament. The team had the best scores on par-3s and par-5s and was second on the par-4s.

Komoto and Cho were second and third in the tournament in pars — no small feat on a course where the winning team was 23-over. But the high scores didn’t stop Mao from making nine birdies, tied for second most in the tournament.

Komoto’s consistency had her tied for the individual lead heading into Saturday, but a small drop in form led to a fourth-place finish.

With the victory, NU qualified for the NCAA Championships in Eugene, Oregon, in two weeks to take on the best teams in the country.

Last year, the Cats came up just short of the match-play round in the tournament, finishing 10th, and this year they’ll be looking to improve on that result.

“It’s just gonna give some confidence that we’re competing well right now,” Fletcher said. “Everyone will tell you that their game wasn’t perfect, but they’re just figuring out how to keep fighting and how to keep pushing through and making the most of the round.”