The Daily Northwestern • May 5, 2016 • https://dailynorthwestern.com/2016/05/05/sports/softball-costly-mistakes-doom-wildcats-against-blue-demons/ 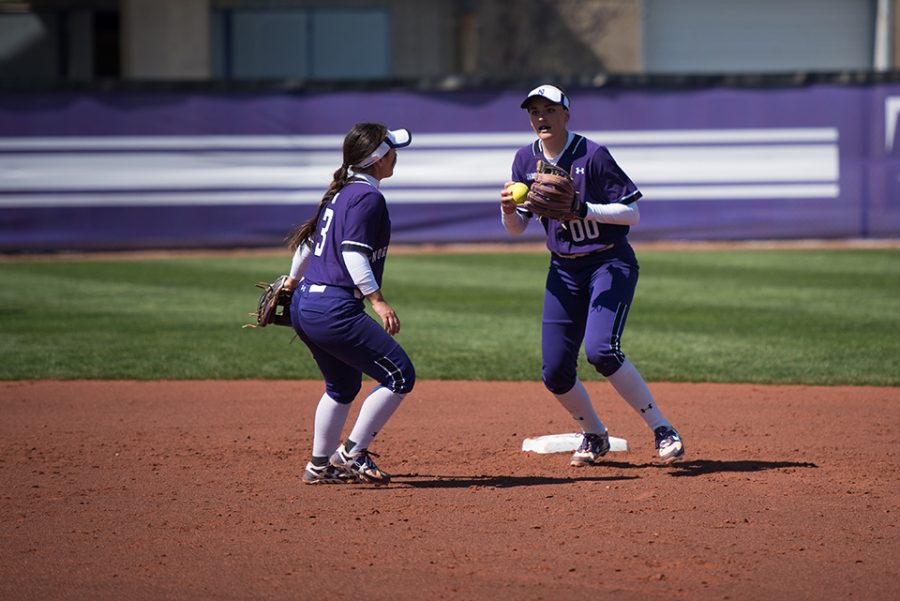 Andrea Filler prepares to throw out a runner. The senior infielder recorded 2 RBIs in the loss to DePaul on Wednesday.

In a contest where Northwestern held the lead for five innings, an unsettling seventh inning dashed the team’s hopes of bringing home a win against a Chicago rival.

Although the game remained close, with the Cats limiting DePaul to only 2 hits through seven frames, the Blue Demons scored 4 runs in the last two innings to earn the win, 4-3. Senior shortstop Andrea Filler said the mistakes made toward the end of the contest really held the team back from closing out the game.

“We took care of the things we needed to take care of on defense,” Filler said. “But down the stretch when we really needed to make the plays, we had some mistakes. We had some errors that we shouldn’t be making at this point in the season, so it’s tough.”

The game began with a five-inning stretch in which NU remained on top 1-0 off of an RBI to left-center field from senior pitcher Amy Letourneau. In the bottom of the sixth, the Blue Demons tied the game on a single, and then managed to score another run off of a Wildcat error during an attempt at a double play.

Coach Kate Drohan said the team’s ability to control the first five innings showed its defensive prowess, and the Cats will be looking to focus on finishing games in their weekend series against Purdue.

“We made a couple of mistakes that hurt us, but I think we just got a little tight out here, we’ve gotta stay loose and we’ve gotta play our softball,” Drohan said.

In the top of the seventh, freshman third baseman Morgan Nelson singled to left field after a 10-pitch at-bat. Nelson’s single was followed by a 2-run homer from Filler, who smashed a fly ball into left field that just barely managed to go over the fence. The dinger was Filler’s team-leading 15th home run of the year and brought the score to 3-2 heading into the bottom of the seventh inning.

But the last inning would prove to be costly for NU.

Following a pitch hit back to Letourneau, the Cats scrambled to get the lead runner out, but the ensuing throw to senior catcher Caylor Arnold was too high, allowing DePaul to score the tying run.

After the Cats then intentionally walked the next batter to load the bases, a sacrifice fly to left field brought home another Blue Demon, bringing the score to 4-3 and giving DePaul the walk-off win.

Although the game did not end as hoped, Drohan said the play from Letourneau and the Cats’ defense remained gritty and tough through all seven frames.

“We came back well, and I thought Amy was tough,” Drohan said. “But there were moments of the game where we could’ve taken control and we didn’t.”

NU will look toward its weekend series at Purdue (27-24, 8-12) to get back on track and hit the coveted .500 mark — a feat that can only be completed if the Cats sweep the Boilermakers.