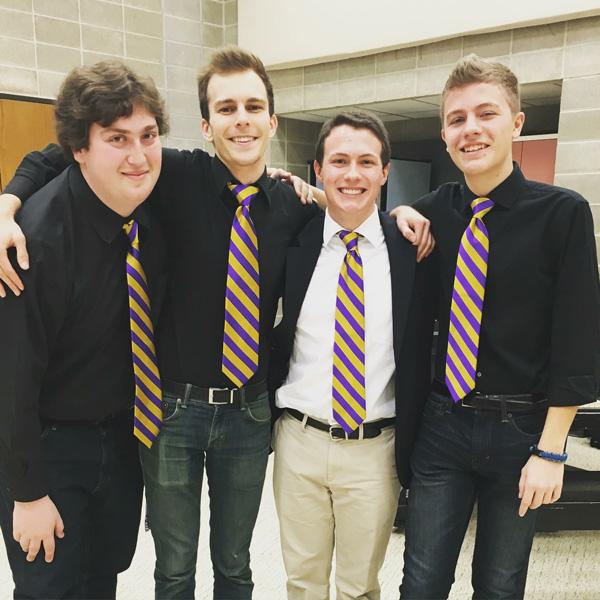 When auditions for Northwestern a cappella groups began this past fall, Bienen and Communication freshman Elio Bucky said he didn’t find a group he quite fit in with. So Bucky, along with three other freshmen voice majors, started a new a cappella group called Tempo Tantrum, with a mission to sing more traditional men’s a cappella music.

“We just didn’t see a group that was doing what we wanted to do,” Bucky said. “We saw a need on campus and wanted to fill that demand that was there.”

The group, which Bucky created with Bienen freshman Jack Reeder, Bienen and Weinberg freshman Ben Perri, and Bienen and McCormick freshman Henry Koch, is different from other a cappella groups on campus because the group’s main mission is to sing classical and traditional music written specifically for men. Bucky said the group performs a diverse repertoire, ranging from barbershop music, a style of a cappella harmony that is traditionally performed by male quartets, to more classical music, such as opera arias.

“We didn’t initially start out with a theme for our show, but we started with a hodgepodge of music and we realized it’s all connected by love,” Reeder said. “We’re hoping that the audience will fall in love with us at first sight.”

Reeder said he thinks men’s a cappella music, particularly barbershop, is an important facet of American music. He added that he thinks it’s important to continue that tradition on campus.

The group plans to add four new freshmen to the group each year, Reeder said. He added that Tempo Tantrum hopes to expand its group so the members can create a stronger community and so the group has a greater chance to continue once the original four members graduate.

Bucky said with more members, the group’s repertoire will be able to expand. The group eventually hopes to incorporate vocal percussion and multilayering into its arrangements, Bucky said.

But for now, Perri said singing in a chamber ensemble like Tempo Tantrum offers a different type of experience for him, as he is used to singing in a larger ensemble.

“When you have four voices and you have one person on each part, it is so critical that everyone is singing the same vowel, and everyone has to be listening the whole time,” Perri said. “You can tell the difference in the sound when we’re locked together.”

At the end of the month, Tempo Tantrum plans to hold an “a ca-picnic” on the Lakefill, Bucky said, and the group is partnering with Arts Alliance to hold two free concerts.

Bucky said he is grateful for the group’s camaraderie and friendships.

“It’s very rare that on the first try you get four people that interact and coexist this well,” Bucky said. “It is so important to have a true meaningful friendship with the people that you are singing with because it makes the music better.”