The Daily Northwestern • May 3, 2016 • https://dailynorthwestern.com/2016/05/03/sports/softball-wildcats-looking-for-statement-win-against-in-state-rival-depaul/ 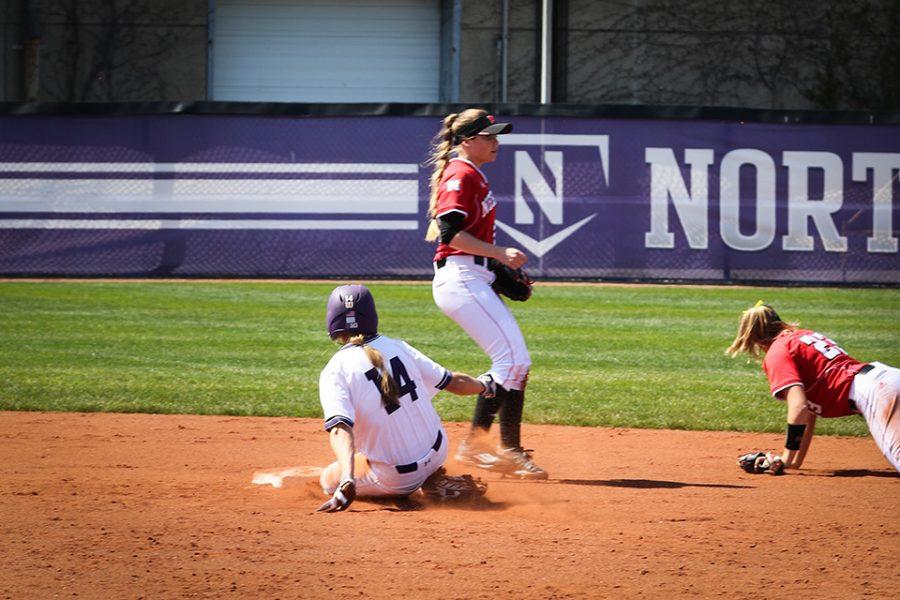 Alcy Bush slides into second. The junior said she recognized the importance of the Cats’ upcoming slate ahead of Wednesday’s contest.

DePaul may not play in the Big Ten, but the rivalry between the Blue Demons and Wildcats dates back decades. And this year, more than just pride is at stake.

As Northwestern (22-24, 12-8 Big Ten) looks to get to .500, the team will need to find success against DePaul (23-24, 13-3 Big East) on Wednesday and against Purdue (27-24, 8-12) this weekend to position itself for a postseason berth. Wednesday’s contest specifically will be significant as the Cats seek to qualify for the playoffs as the regular season comes to a close.

“For us right now, we obviously need to get above .500,” junior first baseman Alcy Bush said. “The game might not be a Big Ten conference game, but we have to prove that we’re the best in our region and we really need to get a win here.”

After winning twice against Wisconsin this past weekend, NU has the momentum it needs to build a hot streak. And though the Cats’ defense bailed the team out of tight spots throughout the series, both the offense and defense will look to make adjustments to keep the Blue Demons on their toes.

DePaul is coming off two wins over Seton Hall, with seniors Morgan Maize and Naomi Tellez leading the Blue Demons in RBIs, 44 each, and home runs, nine each. In 34 appearances, Maize has also been dominant in the circle, with a 3.70 ERA and 156 strikeouts on the season.

In order to keep DePaul’s defense guessing, NU will focus on tightening its ground game on the offensive end.

“This past weekend, we definitely hit the ball in the air more than we should have,” Bush said. “Now we want to make their defense work, make them throw and catch and get the ball on the ground.”

Coach Kate Drohan echoed Bush’s sentiments, noting that the team’s confidence and poise on the field will be key to ensuring that NU brings home a win, especially after a less than stellar offensive performance against Wisconsin.

And although the game will have serious consequences regarding the team’s ability to make the postseason, Drohan said the matchup is also a regular highlight of the season for the whole team.

“This is what Chicago softball is all about,” Drohan said. “It’s a game we look forward to and we’ve traditionally played it the last week of the year, so it has a big postseason impact on our team.”