The Daily Northwestern • May 2, 2016 • https://dailynorthwestern.com/2016/05/02/campus/following-banner-controversy-interfraternity-council-plans-to-implement-four-year-sexual-assault-education-program/ 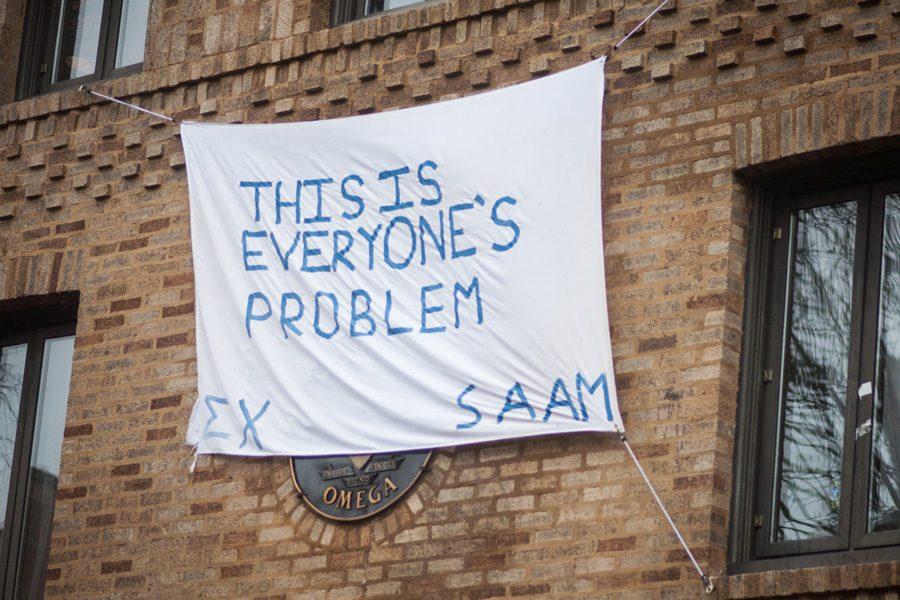 A banner hangs outside Sigma Chi’s on-campus house. The banners were created to observe Sexual Assault Awareness Month, but some students found them to be in poor taste.

IFC faced criticism over the banners, which some students said were in poor taste due to the pervasiveness of sexual assault in fraternities. The banners featured the chapter’s name along with messages such as, “XYZ supports survivors,” “XYZ stands against sexual violence” and “This is everyone’s problem.” The banners were not designed to be a comprehensive solution, but rather “a first step in a long-term vision to bring awareness to an important social issue,” the IFC Executive Board said in a statement released Monday night.

“We recognize now how this campaign may have been emotionally triggering for survivors, and we want to make a deep, genuine apology for anyone that may have been affected,” the board said in the statement. “This was not our intent, but it is our fault for not being cognizant enough and not considering how it might affect others in our community.”

IFC president Will Altabef said the program will be a “continuing education” plan for fraternity brothers and that a pilot version was rolled out earlier this quarter. Altabef said it expands on the existing model, which is that each pledge class receives a one-time visit from Men Against Rape and Sexual Assault.

“People come in here with 18 years of being socialized to think a certain way is masculine,” the Communication junior said. “We’ve got four years to try and correct any wrongs that might come in and hopefully to just make a more positive community.”

Altabef added that he will discourage the next IFC president from hanging the banners next year.

The banners drew criticism from some students, including Weinberg senior Erik Baker, who said IFC needs to do more to combat sexual assault in its chapters. Baker is not a member of an IFC chapter.

“To display a banner (saying) that ‘We support survivors’ is really something you have to earn by actually walking the walk,” said Baker, the former Associated Student Government senator for four sexual health and assault-related groups. “The idea of displaying a banner like that in front of a house where people have been assaulted before seems really in poor taste to me.”

MARS president Dan Loizzo, who also serves on IFC’s executive board, said he helped paint some of the banners and emphasized that they were made with good intentions. But ultimately, he said, the banners were not the best way to send a message.

Incoming College Feminists president Olivia Kuncio said the banners showed a need for more comprehensive solutions to sexual violence’s prevalence in fraternities. She said although shifting perceptions of gender and sexuality is a difficult task, IFC chapters should still push for change.

In addition, greater participation by fraternity members in activism and conversations about sexual assault could work toward that end, said Kuncio, who represents College Feminists and three other sexual health and assault-related groups in ASG Senate.

“The issue isn’t the signs itself,” the Communication sophomore said. “It seemed like that was where the conversation was ending, and for a lot of people that was no longer enough.”

Baker said conversations about consent and sexual assault should not be limited to Sexual Assault Awareness Month or one presentation to a pledge class. He added that he hopes greater awareness and productive conversations will make Northwestern safer for survivors of sexual assault.

“It’s not a matter of coming up with a better banner,” Baker said. “It’s a matter of focusing on the kind of culture change that needs to happen for any sort of banner like that not to be ultimately hypocritical.”

The headline and text of this story were updated at 1:50 p.m. to clarify the timing of IFC’s plans to implement a four-year sexual assault education program.