The Daily Northwestern • May 1, 2016 • https://dailynorthwestern.com/2016/05/01/sports/womens-tennis-northwestern-shut-out-in-big-ten-tournament-semifinal/ 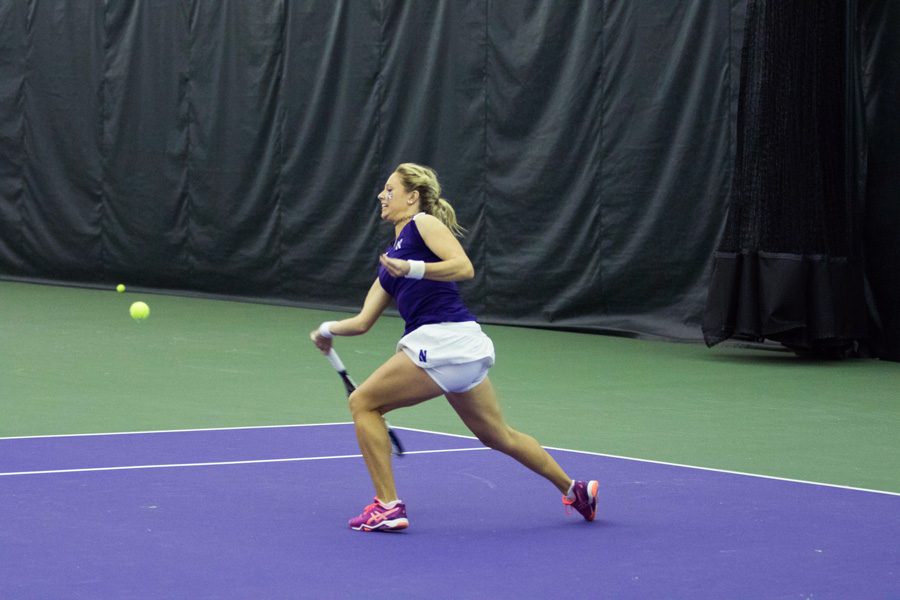 Following an emotional victory over Michigan at the end of the regular season, Northwestern found itself facing the Wolverines again in the Big Ten Tournament semifinals. Unfortunately for the Wildcats, Michigan regained the upper hand and swept the match 4-0, eliminating NU from the competition.

After doubles play, the Cats had trouble jump-starting the singles courts with four of the six first sets belonging to the Wolverines. Early on in the match, the Big Ten Tournament moved indoors due to weather conditions.

With a change of court, NU also hoped for a change in momentum.

“We definitely tried to use (the court change) to our advantage,” Barnett said. “We were all down at one point outside, and when the rain came, we kept telling each other, ‘We can do this. Let’s use this and turn it around.’”

That change never came. NU lost in straight sets on the Nos. 3, 4 and 5 courts, leaving the other three singles matches unfinished. For sophomore Alex Chatt, the loss on her court was personal and reminiscent of last year’s Big Ten Tournament semi-final loss for the Cats when she was defeated for the final point of the match.

“I was pretty disappointed since I was the fourth match to lose, kind of a flashback to last year (for me),” Chatt said. “At the end of the day, we knew it was going to be a much harder match. We knew they were coming back with a vengeance. They switched up their lineup, but in general it was pretty disappointing.”

Now, NU has a week off — its first since the beginning of March — to build off this loss and prepare for the NCAA Tournament in two weeks. Chatt said the goal of a Big Ten championship is only a stepping stone to get to the next level of NCAA Tournament.

Coach Claire Pollard said she is confident they’ll make the tournament, but they’ll need to work hard to succeed. The first step for the Cats is to think about the “disappointing” loss, what they can take away from it and how to use it moving forward.

NU more than likely will not host a regional match since it is not a top-16 team, so the Cats will need to travel in the first and second rounds.

“If you don’t host, you’re really at the mercy of geography and the draw,” Pollard said. “We’re hoping the weather cooperates so we can play outside. … We’re on the right track. The girls are making adjustments and making improvements. We have to play a perfect match to beat any of these teams.”

Despite the disappointment of the Michigan loss, the players said they understand the intensity of post-season play and how it brings out greater competition from opponents.

“At the end of the day, Michigan was just too good,” Chatt said. “They kept the momentum going, and they pressed their foot on the gas pedal. They weren’t going back.”