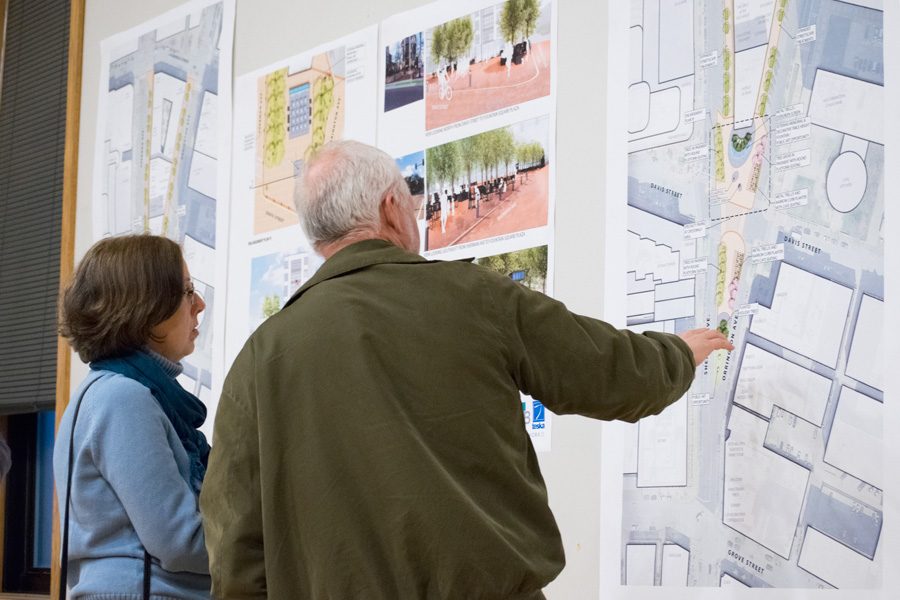 Evanston residents look at preliminary plans for the Fountain Square Plaza, which are displayed on posters around the room. Community members and city staff discussed how to make a veteran’s memorial the focal point of the square at the meeting Thursday evening.

Evanston residents and city staff discussed details of the veteran’s memorial in the redesigned Fountain Square Plaza during a meeting Thursday evening scheduled to examine the preliminary plans for the square’s renovation.

The square is currently only home to a fountain that is fairly old and beginning to deteriorate, city officials said. The new plaza, which includes Fountain Square as well as Sherman and Orrington Avenues between Church Street and Grove Street, will have a new fountain and the veteran’s memorial.

Wilson also said the memorial, which is designed as a wall, should be easily accessible and the flagpole should be installed closer to the memorial than depicted in both preliminary plans.

Ald. Judy Fiske (1st) told The Daily that she and Mayor Elizabeth Tisdahl reached out to the veteran community three years ago for their input on the square’s renovation before the project began. Fiske said city officials, consultants and engineers for the project recognize the memorial should be the most important element of the square, which will also serve as a gathering space.

Three contracting businesses — Teska Associates, Christopher B. Burke Engineering, Ltd. and The Waterworx Company — are redesigning the square after the city received input from many Evanston residents that they would like to see the space renovated, said Jodi Mariano, the principal urban designer with Teska Associates.

“As Evanston has grown, the fountain has remained in its original footprint — a quarter of an acre,” Mariano said. “So as we have taller buildings, more people coming downtown, visiting downtown, living in downtown, it becomes ever more important to have a public space to accommodate that.”

Mariano told The Daily that both options for the plaza had the same elements: fountain, memorial, seating, planting and lighting. She added that it was definitely feasible to distinguish the memorial from the rest of the plaza’s elements and would incorporate the suggestions into the plans.

One of the plans Mariano presented included a water wall and a grove of trees, while the other is characterized by a water table and a trellis in addition to tree plantings.

Both options would eliminate Sherman Avenue’s southbound lane from Davis Street to Grove Street, and Orrington Avenue’s northbound lane from Grove Street to Davis Street, Mike Kerr, executive vice president at Christopher Burke Engineering, told The Daily. Kerr said the closings would not be problematic because one lane on each of those avenues is more than enough to accommodate the daily traffic.

Aside from wanting the memorial brought to the forefront of the plans, several residents who had been part of the visionary process over the last year said they were satisfied with the options.

The renovations are being paid for through the city’s Washington National Tax Increment Financing, which is money collected through taxes by the city to be used for public works and which expires in 2018, so the project timeline has been accelerated in order for the money to be used to complete the project, Fiske said.

“It’s cool the way that we’re trying to bring people into the center of downtown,” Fiske said. “I’m very excited about it. But we do need to spend that money. We can’t let that money get away from us because if we don’t have the money we can’t do anything.”