Lacrosse: Wildcats not ready to give up as they face Ohio State in final game of regular season 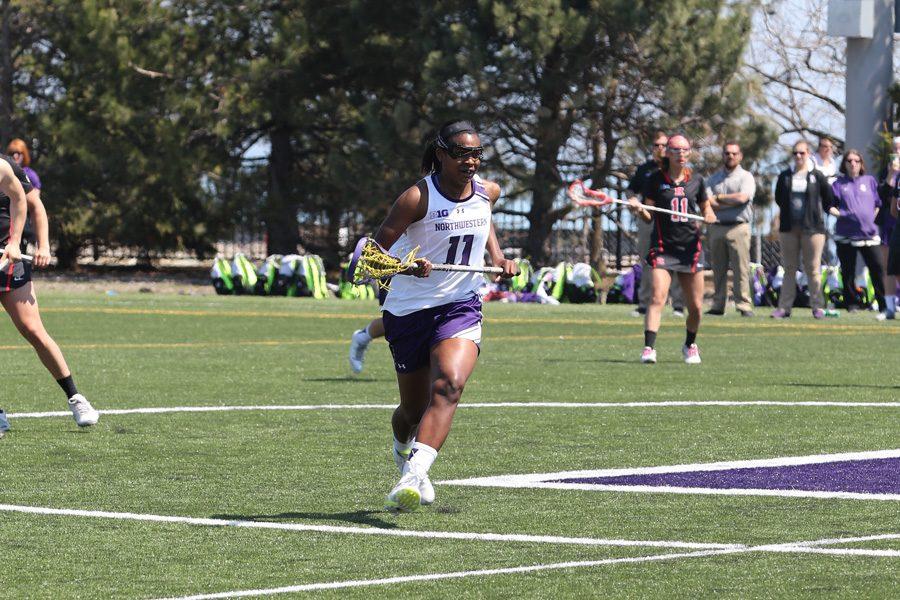 Spring Sanders runs with the ball. The senior midfielder has scored a career-high 2 goals this season.

For the Wildcats, it could all come down to this.

No. 15 Northwestern (7-8, 2-2 Big Ten) will take on No. 19 Ohio State (11-4, 2-2) in Columbus on Friday in what might be the Wildcats’ most important game of the season. NU must finish the regular season and Big Ten Tournament with a combined record of at least .500 to qualify for the NCAA Tournament, meaning a loss to the Buckeyes would force the Cats to have to win the conference tournament to do so.

NU is coming off of a devastating 17-13 loss last week to then-No.14 Penn State, dropping the team’s record below .500 for the first time this late in a season since 2002 — the program’s first season as a varsity sport.

Coach Kelly Amonte Hiller isn’t used to dealing with the pressure of possibly missing out on the NCAA Tournament, and the coach said she understands the implications Friday’s game has on the team’s future.

“Hopefully it gives our kids a sense of urgency,” Amonte Hiller said. “We have to come out to play, because Ohio State is a very good team and it’s a must-win game for them too. We expect a battle just like we got in the last game and we are going to have to fight for every inch.”

The Cats have struggled defensively this season, conceding an average of 10.87 goals per game — ranking them No. 69 in the country in that category. One of the reasons for this poor defensive showing throughout the year is NU has had trouble stopping opponents in transition, especially following fast breaks from lost draw controls and clears.

Senior midfielder Nancy Dunbar said the team is not going to change its defensive scheme for its matchup against Ohio State though.

“We’re just going to stick to the gameplan, have each others’ backs and play good one-on-one defense,” Dunbar said. “We’re definitely in a different position than we have been before, but I think there is also a bright spot to it since it makes us realize how special an opportunity it is to be in.”

For the seven seniors on the team, Friday’s game will be the last regular season match of their collegiate careers. Since joining the Cats, the seniors have a combined record of 55-26, totaling to a .679 winning percentage.

Senior attacker Kaleigh Craig, who leads the team in scoring and total points with 37 and 46, respectively, has been the center of NU’s offense this season. The senior has stepped up after fellow scoring-threat and sophomore attacker Selena Lasota’s relatively disappointing season.

Despite the team’s rollercoaster season, Craig said she isn’t ready to give up.

“It’s come very fast and it’s pretty crazy that it’s already our 16th game,” Craig said. “I’m definitely really excited, and I don’t feel like the season is over, and it’s not going to be over — we still have a lot of work to do.”

NU’s season has been historically difficult, facing 11 ranked opponents in its first 15 games. The Cats started the season off strong with an upset victory over then-No.4 Duke, but the team has floated around .500 since then.

Craig said this season has been a bit of an anomaly, but in the end, the challenges the team faced will be worth it.

“Every year I’ve been here it’s been a little bit different,” Craig said. “But this year has really tested us more than I have ever been tested any other year here. I really, really believe it is going to pay off. We’re going to make it pay off.”