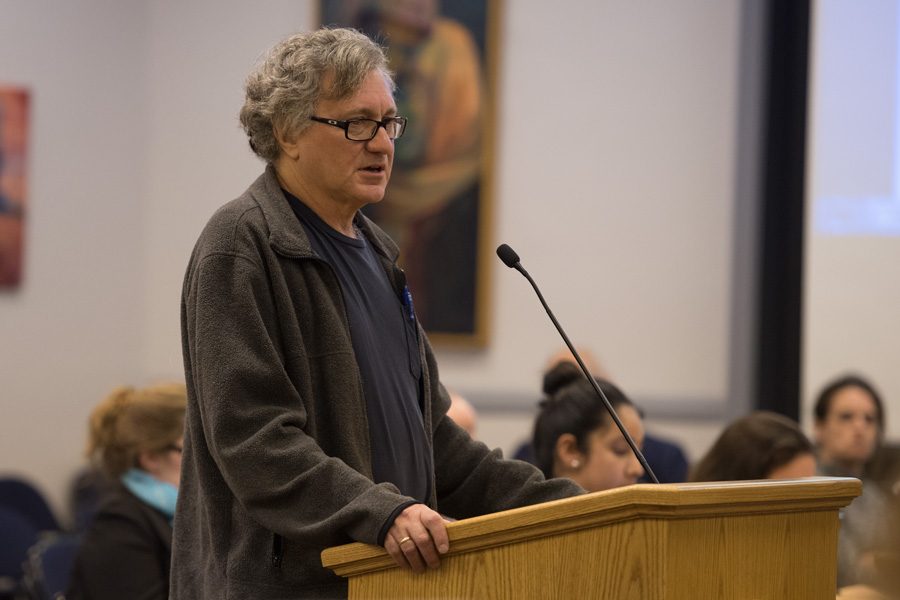 Dave Glatt speaks at an Economic Development Committee meeting Wednesday night. Glatt is hoping to receive a loan from the city to open his new restaurant, Dave’s IK.

The plan for Dave’s Italian Kitchen to take over 815 Noyes St. is one step closer to becoming a reality.

The Economic Development Committee voted Wednesday night to recommend a loan for Dave Glatt’s new restaurant, Dave’s IK, which he is planning to open at the former location of Arlen’s Chicken and DMK Burger & Fish. The loan will cover the cost of buying new kitchen equipment for the restaurant and will have to be approved by City Council. The loan would be for up to $30,000 of the more than $100,000 in expenses Glatt expects to need for his new restaurant.

Paul Zalmezak, an Evanston economic development official, said they still have to look into Glatt’s financial history before moving forward with the loan, but are aiming to bring the issue in front of the council at its May 9 meeting.

It is in the interest of the city to retain the longstanding business, Zalmezak said, and a loan from the city will help Glatt stay in Evanston.

Glatt operated Dave’s Italian Kitchen for 44 years, but closed it earlier this month after what he said was a financial decline that took place over many years. In city documents, Glatt cites the cost associated with maintaining a large restaurant and the recent economic recession as reasons for his financial difficulties.

After the closing of his restaurant, Glatt said he felt as if “the restaurant industry was done with (him).” However, he reconsidered after being contacted by Zalmezak, who connected him with Harry Major, who owns the space on Noyes Street. Major is offering Glatt the first three months rent-free, reducing the rent for the following 24 months and declining to charge a security deposit, according to city documents.

Glatt praised Major in his loan proposal, saying Major had been incredibly accommodating. As for the space, Glatt said during Wednesday night’s meeting that it reminded him of his first restaurant.

“I took a look at the space, and quite honestly I felt that I had come home,” he said. “It’s hard to explain this to somebody who is a not a cook and/or restaurant person, but it was something that was very moving for me. I felt that I belonged there.”

Dave’s IK will have seating for 40 people and will be open for lunch and dinner, according to Glatt’s loan proposal.

All but one of the committee members voted to recommend the loan to the council, and a few of the aldermen on the committee shared their memories from Dave’s Italian Kitchen.

“I’m very familiar with Dave’s. … I’ve eaten Sunday dinner there with my family forever,” Ald. Judy Fiske (1st) said. “Spending two hours at Dave’s with a $13 pizza and a bottle of wine maybe didn’t do a lot for Dave, but I didn’t think about that when I was eating.”

Fiske said she had even once found a kitten outside the restaurant on a snowy evening and had taken it home. The cat’s name? “Dave’s Italian Kitten.”

The spot on Noyes Street is perfect for Dave’s IK, Fiske said, and although Glatt’s financial history must be considered, his character and his restaurant’s contributions to the community should be taken into account as well.