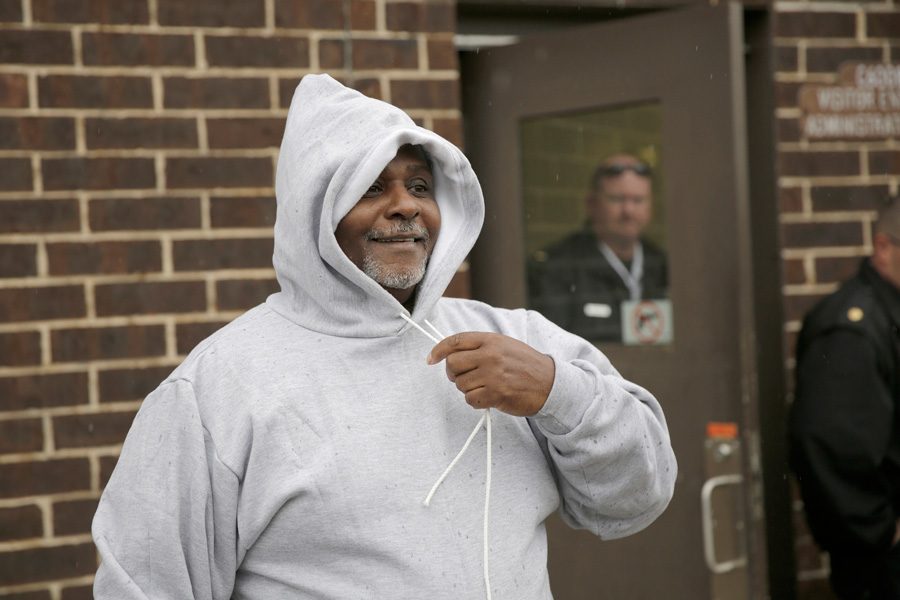 Alstory Simon talks to reporters as he is released from the Jacksonville Correctional Center in Jacksonville, Illinois, on Oct. 30, 2014. A private investigator sued Simon, among others, Wednesday for allegations of defamation.

A private investigator who worked with Northwestern students and former Medill Prof. David Protess filed a counter-lawsuit Wednesday against Cook County State’s Attorney Anita Alvarez and others, alleging defamation against him.

Paul Ciolino assisted the then-Medill Innocence Project in freeing Anthony Porter, who had been convicted of the 1982 murders of two teenagers in Chicago.

Although Porter was originally found guilty of the double homicide, he was released from prison in 1999 after Ciolino obtained a video of Alstory Simon confessing to the murders. Simon pled guilty and was sentenced to 37 years in prison, but Cook County prosecutors concluded in 2014 that he had been coerced into a confession.

After being released from prison, Simon sued NU, his former attorney Jack Rimland, Ciolino and Protess, alleging in the suit that they had “conspired to frame Simon for the murders.” In March, a federal judge ruled to let the $40 million lawsuit move forward.

Defendants in Wednesday’s lawsuit include Simon as well as Terry Ekl and James Sotos, attorneys who filed the lawsuit against Ciolino in 2015. Ciolino’s lawsuit claims that Ekl, Sotos and Alvarez “conspired” to set Simon free despite believing he was guilty. The lawsuit also said the three were among those who defamed him in a 2015 documentary “Murder in the Park,” which points to Ciolino as having convinced Simon to agree to videotape a false confession with a promise of financial compensation and a reduced prison sentence.

Ciolino told The Daily he filed the $25 million counter-lawsuit in response to the federal judge not dismissing Simon’s lawsuit, which he said is based on “lies and fiction.” Ciolino said the “ridiculous” allegations against Protess and his team are “false and without merit.”

“I spent 33 minutes of my life with Alstory Simon — that’s it, 33 minutes,” Ciolino said. “I never talked to him again, never wrote him a letter, never visited him, never had a conversation with him. And so for the State’s Attorney to say that what I did was outrageous, when it’s all on videotape, is just ludicrous.”

Alvarez and Ekl could not be reached for comment before the time of publication.