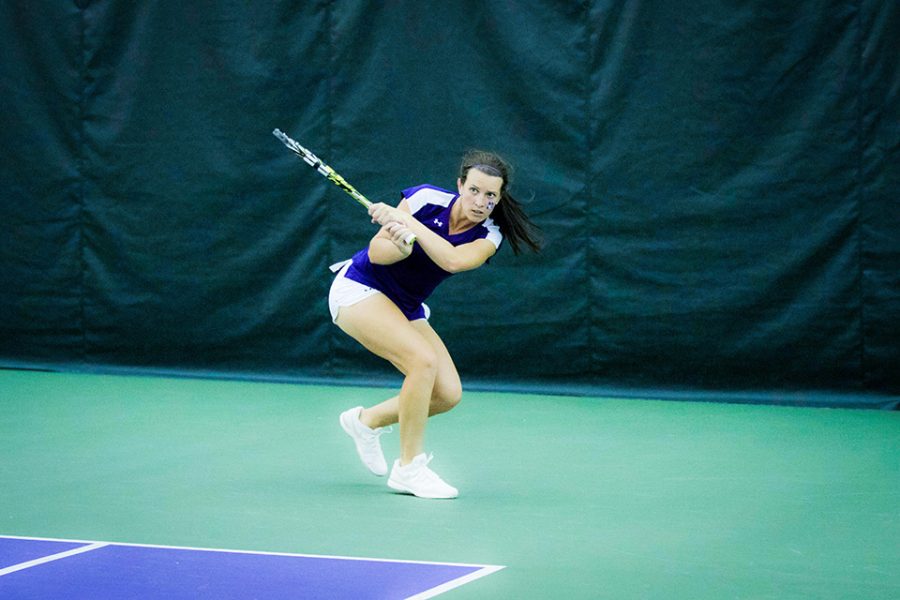 Jillian Rooney hits a backhand. The junior has helped anchor the bottom half of the Cats’ lineup this season and will look to do so again in the conference tournament.

With the regular season ending last weekend, Northwestern now must prepare for the postseason in an attempt to reclaim the Big Ten title.

Throughout the season, the Wildcats (12-9, 10-1 Big Ten) faced a tough schedule, especially during out-of-conference play. In the final weekend of the regular season, NU took down conference rival then-No. 10 Michigan to mark its first top-10 win since 2014.

“The beginning of our season, we played a lot of great teams,” junior Jillian Rooney said. “We learned a lot from that because the level (of competition) was so high, we had to play exceptionally well to compete with them. Even in (conference) season, the Big Ten has gotten stronger, so that’s helped us a lot.”

Coach Claire Pollard has noted during the season the durability of the bottom of the lineup, the No. 5 and No. 6 singles courts. Rooney, junior Brooke Rischbieth and freshman Lee Or have all found themselves playing at those positions, and combined for a 21-15 record on the bottom two courts throughout the season.

“We don’t take any match for granted,” Rischbieth said. “We go in, no matter who the opponent is, with the same mindset to work as hard as we possibly can … Looking to the Big Ten Tournament, we’re not going to change anything up.”

Because NU is the tournament’s second seed, the Cats have a first round bye and their first match will be against either Indiana or Michigan State on Friday. The Spartans will be fighting on their home court and will have some advantage, but NU beat them last weekend in East Lansing 6-1.

Against the Hoosiers, the Cats recorded the same winning score a little over two weeks ago, at that point extending their then undefeated record to 7-0. After the second-round match, NU will either draw Michigan or Purdue.

“We’re going to take it one match at a time,” Rooney said. “We have to look at one opponent at a time, but after last weekend, we’re really excited. We’ll just have to go in and compete.”

For Pollard, the postseason is completely separate from the regular season. She said it’s basically starting at 0-0 again because “the atmosphere of the Big Ten Tournament is totally different than a regular season match.”

Pollard said the biggest difference for the Wildcats entering the postseason is its depth.

“There were times earlier on in the year when we were just giving away points, wherever it was,” Pollard said. “The truth is every day someone was not delivering on the effort or kind of toughness you need to be successful. … Our greatest strength now as a team is that we have no holes. As long as we bring that this weekend, we become a tough out.”