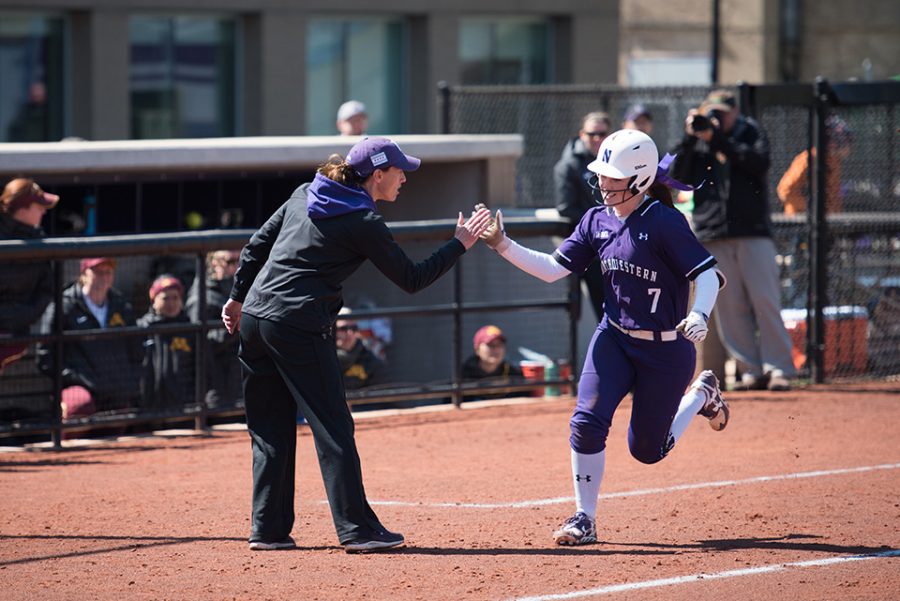 The game may have been played on a rainy weekday afternoon for a tiny crowd, but it was nonetheless a milestone contest for coach Kate Drohan.

“This win was really important for our team,” said Drohan, attempting to swiftly refocus the attention from herself to her players. “How we played in these conditions was excellent. I’m really proud of our competitive spirit today.”

Drohan served as an assistant coach for four years before becoming head coach in 2002. Her 500 career wins rank second all-time behind long-time coach Sharon Drysdale, who won 640 games in 23 seasons.

“I knew about it at the beginning of the season, but I haven’t thought about it since,” Drohan said. “It was a surprise to me.”

The Cats did significant offensive damage in the fifth inning. Senior shortstop Andrea Filler homered and junior left fielder Krista Williams notched her first RBI of the season as NU eventually put up a 4-spot in the frame.

In the circle, seniors Kristen Wood and Amy Letourneau each threw three innings and limited Loyola to five total hits. The Ramblers’ only run was unearned.

“This is a big win for us,” said Filler, whose sixth-inning home run — her second of the day — ended the game an inning early. “It’s going to help our record obviously for us to get to that .500 mark, and it’s always a big win to beat your crosstown rival.”

Beyond Drohan’s accomplishment and despite the paltry crowd, the game was significant in NU’s season. With just seven games left in the regular season, the Cats moved to within three games of .500 as they continue their late-season push towards an NCAA Tournament berth.

Partially because of its challenging schedule, NU has an RPI of 47, making it a contender for an at-large berth to the 64-team tournament. Teams are required, however, to have at least a .500 record to be eligible.

“It’s season-changing for us at this point,” Drohan said of Wednesday’s win. “Every single opportunity we have as a team right now, we’ve got to make the most of it. I feel as though we played really hard, played really tough softball today.”

The significance of Drohan’s accomplishment was not lost on her team, who dumped a Gatorade bucket on her after Filler’s home run ended the game. A graphic on the stadium scoreboard commemorated Drohan and her twin sister Caryl Drohan, who has been on the staff since 2003.

Although her head coach deflected credit, Filler said the milestone was nonetheless important.

“It’s amazing. I’m so happy for the coaches,” she said. “It’s a great feeling to contribute to some of those wins.”