Professors Gordon, Mokyr clash over the future of economic growth 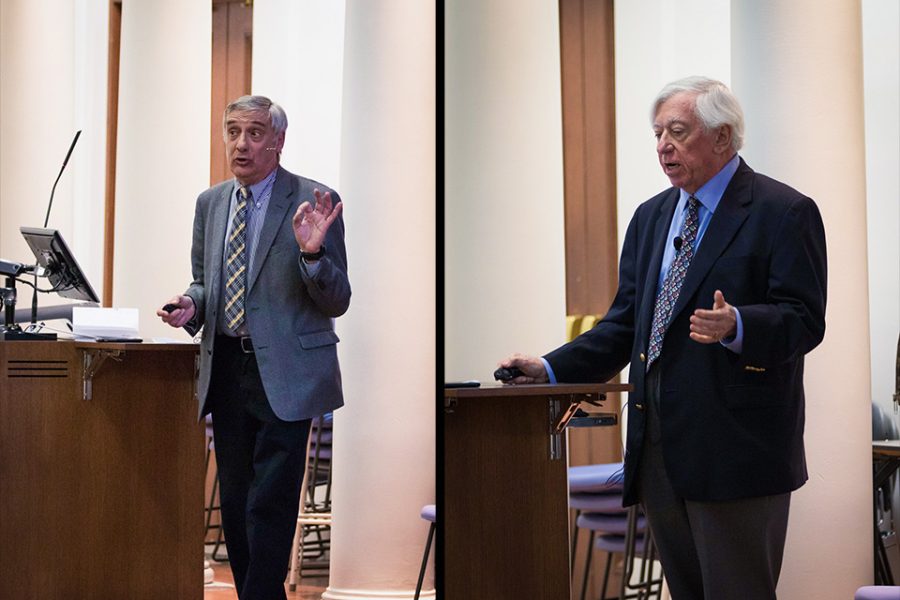 Profs. Joel Mokyr (left) and Robert Gordon debate the future of economic growth. Gordon argued that US growth will never return to its mid-century peak, while Mokyr countered that technology will continue to fuel advances in productivity.

Robert Gordon does not believe in a bright American future.

“We’re mired in the muck with productivity growth as slow as it’s ever been in US history,” the economics professor said. “Everywhere I look, I see things standing still.”

Gordon and economics Prof. Joel Mokyr faced off Tuesday in “Clash of the Intellectual Titans,” an annual debate hosted by Political Union that features two professors with opposing viewpoints. The event, staged in front of a crowd of more than 200 students in Harris Hall, centered on Gordon’s recently released book “The Rise and Fall of American Growth,” which asserts that the greatest years of technological innovation are over.

On the other side, Mokyr argued that innovation will continue to advance the economy. He also pointed to globalization, saying that even if new inventions are made outside the US, the country still stands to benefit.

“What happens in America may not be the only factor,” Mokyr said. “In today’s world, if something is invented anywhere, it is invented everywhere.”

But Gordon said technology will continue to progress, just not at the rate needed to stave off the “headwinds” that impede growth in productivity and per capita gross domestic product. According to Gordon’s analysis, the United States experienced its greatest period of growth from 1920 to 1970 with diminishing returns in the past few decades.

Challenges such as the cost of higher education, changes in national demographics, rising income inequality and poor fiscal policy will all make growth harder to achieve, Gordon said. And he added that innovations such as robotics and smartphones have done relatively little to work against these factors.

“I hope that’s enough cheerful news for you for one evening,” Gordon joked about his gloomy projections.

But Mokyr added that recent technological progress in the US has been as exciting as ever. Eras such as the Industrial Revolution were marked by humanity solving concrete problems, he said, and today there are still plenty of concrete problems — such as global warming, water scarcity and pollution — for scientists and inventors to solve.

Gordon rebutted that trying to fix negative problems was not the same as progressive innovations that have defined other eras of human history, but Mokyr stood by his beliefs. Technology may not necessarily improve our lives, Mokyr said, but it will certainly continue to change them.

Economics Prof. Mark Witte, who moderated the debate, said he thought the event appealed to a wide audience.

“It drew on lots of disciplines,” he told The Daily. “Gordon brought up a lot of great history and sociology, and Mokyr brought in a lot of science and also history. It’s almost like four distribution requirements all in one.”

Students in attendance likewise seemed entertained by the debaters’ playful banter, with Gordon and Mokyr poking fun at each other throughout their speaking periods.

Weinberg freshman Pranav Dhingra sided with Mokyr’s more optimistic outlook, and said he enjoyed the educational value of the event.

“It’s one of the most interesting economics discussions I’ve had so far at NU,” he said. “I guess you’re learning something new every day.”