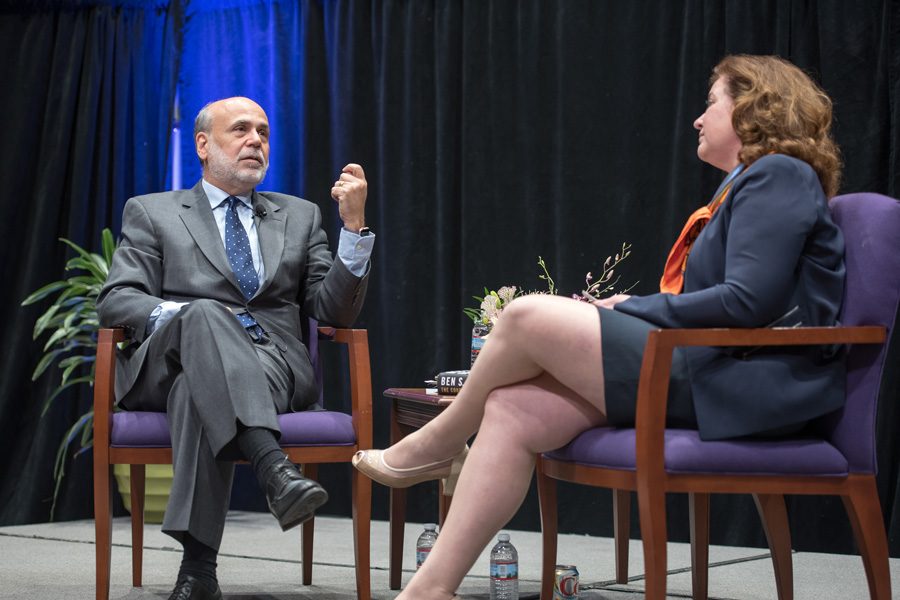 Ben Bernanke responds to a question from Kellogg Prof. Janice Eberly. The former Federal Reserve chairman discussed his role in abating the 2008 financial crisis in front of an audience of more than 700 students.

Ben Bernanke’s life has changed quite a bit since the end of his term as chairman of the Federal Reserve in 2014.

“Parking problems are a lot worse, and like everybody else I have to stand in the security line at the airport,” he said. “Those are the two big losses.”

Bernanke spoke Monday night to a packed audience of more than 700 students in Leverone Auditorium for the annual Susan Bies Lecture on Economics and Public Policy, which brings academics to Northwestern’s campus to discuss microeconomic and macroeconomic policy issues.

Although Bernanke is a well-regarded academic in the field of economics, having taught at both Princeton and Stanford, much of the talk focused on his former role as chairman of the Fed during the 2008 financial crisis.

Bernanke put the banking catastrophe in simple terms for a diverse audience — which included a mix of undergraduates and Kellogg students — and downplayed the role subprime mortgage lending had in causing the financial crash.

“Subprime mortgages, collectively, made up just 1 percent of global financial assets,” Bernanke said. “The subprime mortgages became the trigger for what was essentially an old-fashioned banking panic.”

The Fed, he said, was created to be a “lender of last resort” for traditional banks in times of panic when consumers withdrew their deposits. Financial institutions have become more complex in the 100 years since the Fed was created, he said, which made it much more difficult to respond to widespread crisis in 2008.

Bernanke said letting banks such as Lehman Brothers fail was never the goal, but the Fed was often limited in its options. Prior to Congress enacting the Troubled Asset Relief Program — an infusion of cash meant to stabilize the financial system — the Fed could not bail out the bank with government funds, and Lehman was too deep in debt to be bought out by a competitor or receive a loan from the government.

“In real time, you don’t know how bad it’s going to be,” Bernanke said of the whole crisis. “We were trying to balance doing too little and doing too much.”

The former Fed chairman took a more conservative view than Sanders, stopping short of advocating for the breakup of banks but saying new regulations have created incentives for banks to downsize themselves.

“Part of the goal is to make being big less attractive,” Bernanke said. “Some companies, like General Electric, have actually broken up themselves.”

Kellogg Prof. Janice Eberly, who conducted the interview with Bernanke, said she thought the event was a learning opportunity for students and added that she was impressed with the student turnout.

“I was pleased to see the response,” she told The Daily. “It shows the level of engagement our students have in the world.”

Bernanke seemed to entertain students in attendance, who laughed and even applauded at several of the former chairman’s jokes.

“I thought going to the speech would be a good way to integrate what we learn in class with the real world,” he said. “I really liked when he addressed the behind-the-scenes workings of the Federal Reserve … and the misconceptions the public has on the 2008 financial collapse.”