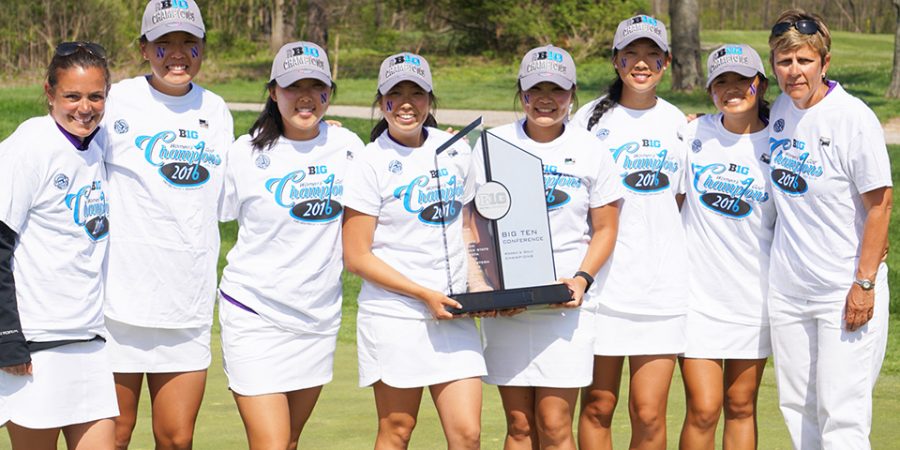 The women's golf team poses with their trophy after winning the Big Ten title. The team finished tied for first with Ohio State for the second year in a row.

With Northwestern’s Big Ten title hopes hanging in the balance, it all came down to freshman Stephanie Lau.

“It was totally surreal,” Lau said. “I had a similar moment a few tournaments ago, and I missed my putt, and since then I was down on myself, and I knew I couldn’t do it again. To be able to have that moment again, and to make it this time is totally surreal and it gave me a lot of confidence.”

The No. 7 Wildcats won their second-straight Big Ten Championship on Sunday, shooting 12-under-par to tie with Ohio State for first place.

The team was led by freshman Lau, whose clutch par putt secured NU a share of the title as she shot 5-under for the tournament, tied for fourth overall.

“I was just focusing on the process,” Lau said. “Just doing the best I could on each shot, planning well ahead of time. Leading up to this event I felt pretty good about my whole game, so I was just allowing it to show.”

This is the second-straight year the Cats have tied for the title with Buckeyes, as both teams finished 1-under at last year’s tournament. NU also won a Big Ten title in 2013, making the 2016 championship title its third in four years.

In addition to Lau’s impressive performance, fellow freshman Janet Mao and sophomore Hannah Kim both finished under par for the tournament while junior Kacie Komoto finished even.

“My iron shots were consistent,” Kim said. “We really worked hard for this, and I think our team deserves it more than anyone else in the Big Ten, besides Ohio State. We’re looking forward to being champs next year again.”

The Cats opened the tournament with a 4-under first round, 1 shot behind day-one leader Purdue. Ohio State, meanwhile finished 3-over on the day, 8 back of the lead.

NU shot 2-under on a difficult day two, as it was one of seven teams to post its worst round of the tournament on the day. Purdue, meanwhile dropped back with a 3-over 291, and eventually finished the tournament in third place. The overall struggles of the field left the Cats with a 2-shot lead over the Buckeyes. Ohio State shot a scorching 7-under on the day, the best score of the day by 5 strokes.

“With this course, pin placement can be a big factor,” Komoto said. “I did notice on the first day that the pins seemed to be in easy locations where you can make a lot of birdies, so I think the second day the pins did play a little harder.

Despite opening the final day behind by 2 strokes, the Buckeyes tied NU at 13-under heading into the final stretch.

With both teams dropping a stroke over the final two holes, however, it all came down to Lau’s par putt to determine whether the teams would again split the championship or whether the Buckeyes would win outright, and the freshman came through.

“It feels amazing,” Lau said. “There was a lot of momentum going into it because the team had won it last year, so being able to be on the side actually contributing to make it a win is an awesome feeling.”