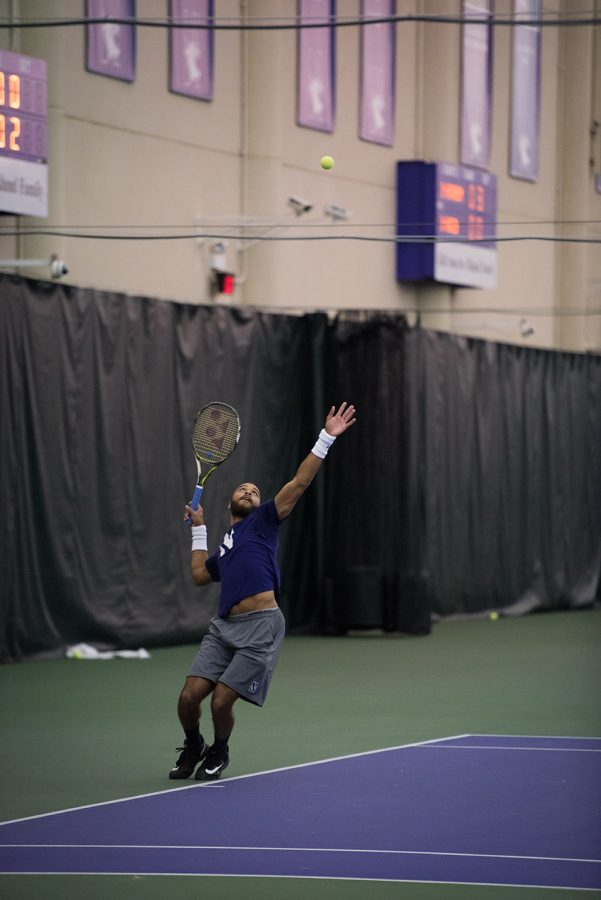 Sam Shropshire tosses the ball before a serve. The junior won his singles match against Penn State on Sunday in straight sets.

After a season of shattered ceilings and defied expectations, the Wildcats’ recent road trip served as jarring reminder that room for growth exists. And yet, at the same time, it exhibited the growth of a historically-successful team that will enter the postseason having turned plenty of heads.

Splitting their weekend contests, the No. 14 Cats fell short of the the conference title but also became the winningest team in program history.

In the penultimate contest of a dominant Big Ten campaign, Northwestern (24-3, 10-1 Big Ten) found itself on the receiving end of a beatdown Friday against No. 5 Ohio State. In the process, the Cats’ oft-repeated goal of winning a Big Ten title fell all but out of reach, with a Buckeyes’ victory Sunday solidifying NU’s spot as second best in the conference.

But Sunday also brought good news for the Cats, who notched their record 24th win against a ranked Penn State squad.

“There have been some great teams at Northwestern, so I think that’s a really, really good accomplishment,” junior Sam Shropshire said.

The weekend wasn’t perfect, even though the narrative presented NU with the opportunity to write a fairytale ending. Friday’s showdown between two undefeated powerhouses guaranteed that, with wins from both squads on Sunday, only one would sit atop the Big Ten standings.

The Buckeyes’ used a sweeping victory in the doubles slate to propel them into the singles round, where a slow start doomed the Cats. Junior Konrad Zieba fell to Mikael Torpegaard, the nation’s top ranked player, and senior Fedor Baev and junior Alp Horoz lost quickly on courts No. 4 and 6, respectively.

Sunday’s finale offered NU a final shot to finish in style, and the Cats capitalized. Though Ohio State’s concurrent win killed NU’s chances of sharing the title, a hard-fought win over the Nittany Lions enshrined the 2015-16 Cats in record books and allowed them to close the regular season on a high note.

“We wanted to finish our regular season with a win,” coach Arvid Swan said. “The guys wanted to respond. We wanted to feel good going into the Big Ten Tournament, and I do feel good about where we’re at.”

The match began with split decisions in the first two doubles matches. Zieba and Shropshire, the No. 88 doubles pairing in the country, found themselves locked in a barnburner as their decisive match went into a tie-breaker.

The duo ultimately pulled out the victory, giving NU — who has not lost after winning the doubles point this season — a 1-0 lead.

“It came down to our match, which was obviously very close, so we were just trying to stay focused and win the set,” Shropshire said.

Soon after, Shropshire handed the team another point with a 6-3, 7-5 win at No. 1 singles.

But the Cats hit a rut after the hot start. Horoz and Baev were defeated in straight sets, and junior Strong Kirchheimer lost his first set and found himself down 3-0 in the second. Zieba eventually broke the 2-2 tie to put NU a match away from making history.

After a slow start, Kirchheimer hit his stride, winning the second and third sets 6-4 apiece to seal the team’s victory.

The Cats now have a few days to prepare for the Big Ten Tournament in Minneapolis, where they’ll claim a first-round bye as the No. 2 seed before beginning play Friday.

And though they fell short of their lofty goal to finish on top of the Big Ten standings, the postseason offers a team that has enjoyed unprecedented levels of success one last chance to take the final step.

“There’s a time to appreciate (our success), and we’ll appreciate it for maybe another hour, but then it’s back to the mindset that we’ve had,” Kirchheimer said. “We’re trying to accomplish some things we haven’t done.”