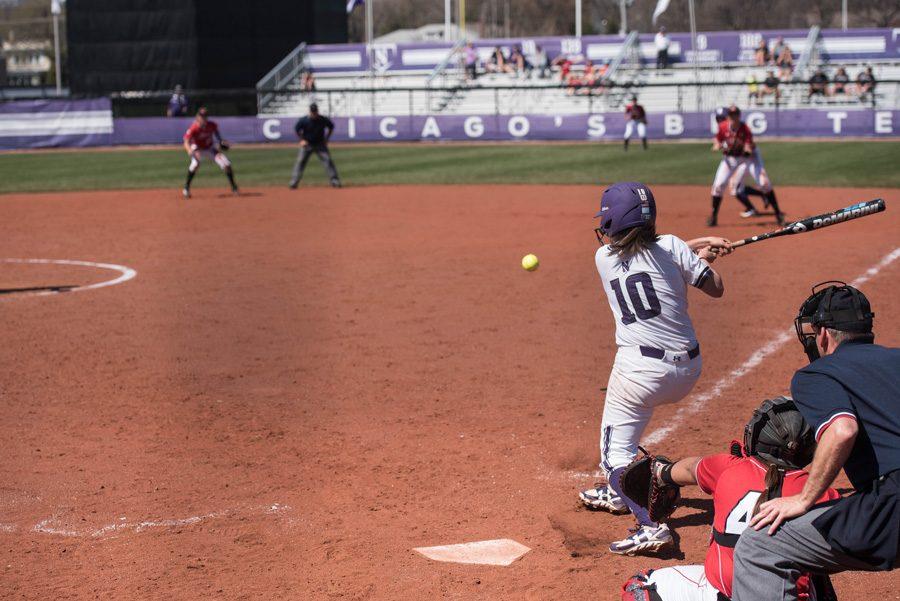 Fran Strub makes contact with a pitch. The outfielder is one of seven seniors on the team who will be celebrated during Senior Day festivities this weekend.

The Wildcats realize they can’t change the outcome of games already played, so they’re looking to the future.

After being swept by Nebraska last weekend and seeing its postseason chances take a hit, Northwestern (16-23, 7-7 Big Ten) is seeking to get back on track against Michigan State (22-22, 4-10) in a home weekend series, the team’s final series of the season in Evanston.

“Dwelling on the games in the past (isn’t) going to help us move forward and we really need to play really well and win these next series,” sophomore outfielder Sabrina Rabin said. “The mentality is just ‘We need to win these next ones.’”

Despite falling in all three contests against the Cornhuskers, the Cats had times when they “looked brilliant,” coach Kate Drohan said. NU lost Friday’s game by a single run, after holding a 3-1 lead after six innings. The team then used two late rallies to push Sunday’s eventual 11-9 loss into extras.

In the extra-inning affair, the Cats jumped out to an early 5-0 lead. Nebraska, however, took advantage of NU miscues in the 11th inning to grab the victory.

Though Drohan and her players are staying positive about the situation, they said they realize the Cats can’t afford any more close losses with occasional moments of strong play. NU won 27 regular season games last year en route to an NCAA Tournament appearance, but with just 11 games left before the Big Ten Tournament, the Cats will need to start winning quickly to contend for another berth.

A recent six-game winning streak brought NU within four games of .500, but Nebraska stunted that momentum and significantly trimmed the Cats’ margin for error. Drohan said the team has a “backs against the wall” mentality with so few games left in the season.

The Cats have an RPI of 48, which makes them a contender for an at-large bid to the 64-team tournament. But, since teams are required to have a winning record to earn an at-large spot, NU must make a major charge over the next three weeks.

“Every game is just as important as the next, but … we just need to start winning,” Rabin said. “It’s almost the end of the season and we want to send our seniors out the right way.”

Though the Cats will close their home schedule Wednesday against Loyola, they will hold Senior Day festivities this weekend. Senior infielder Andrea Filler, who transferred from Boston College after the 2013 season, said despite NU’s difficult road ahead, it needs to “play in the moment and be in the moment.”

She added that playing at home for the final time will be difficult, but said she hopes to help lead the Cats back to the postseason.

“That’s one thing we want to remind some of the younger players and even the older players,” Filler said. “Everybody throughout the team, it’s not about what you did in the past, it’s about what we’re going to do in the future.”