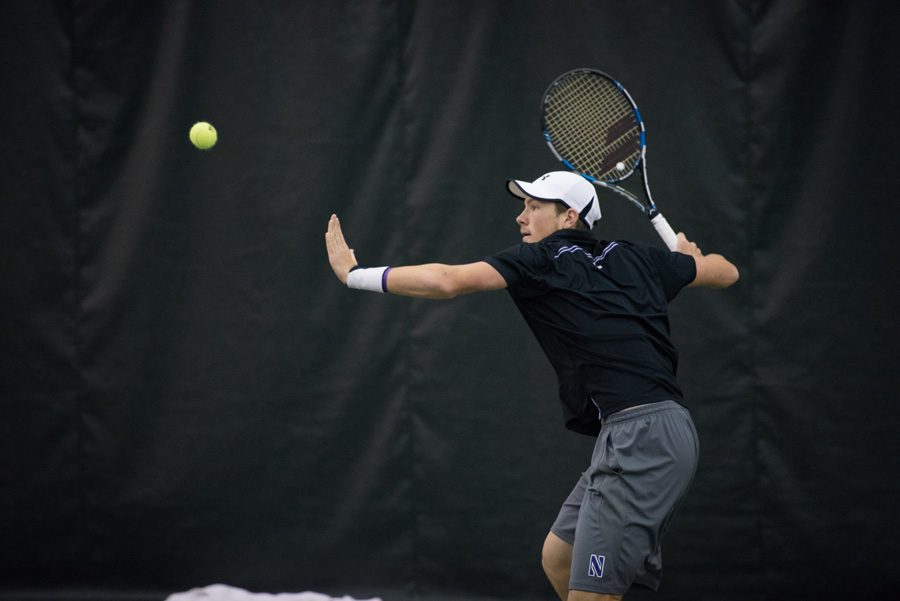 Strong Kirchheimer eyes the ball before a forehand. The junior has solidified the No. 3 singles spot for Northwestern this year, going 17-1 at the spot.

Northwestern has a chance to win its first Big Ten title since 1990 and break the program’s record for wins in a season this weekend.

“They’re obviously big matches, we want to do as well as possible and if we want a shot at the Big Ten title we need to beat Ohio State,” senior Fedor Baev said. “It’s all there for us to take and we just need to go out there and get it.”

The Cats’ success throughout the season has set up Friday’s pivotal match with the Buckeyes to be the most significant in the Big Ten this season. Ohio State has shut out all nine of its conference opponents and has also posted wins against No. 11 Florida and No. 13 Texas A&M.

Penn State could prove to be a tougher test than the team’s record indicates. The match will be played in State College, Pennsylvania, where the Nittany Lions have a perfect 12-0 record. However, the biggest test of the weekend will be in Columbus based on recent history.

The Buckeyes have dominated the rivalry with NU, having won the last 13 consecutive matches. The Cats’ last victory came in 2005 when Chris Klingemann, now an NU assistant coach, played for the Buckeyes.

Baev and the Cats have not lost in nearly a month and will be riding a nine-game winning streak into their matches this weekend. NU is fresh off convincing victories over No. 22 Michigan and Michigan State last weekend.

Junior Strong Kirchheimer has posted the best record of any Wildcat going 25-3 in all competitions and a 19-1 duals. His 25-3 mark puts him second in NU’s all-time season winning percentage, behind only former world No. 4 singles player Todd Martin.

Kirchheimer’s performance this year currently has him at the No. 78 singles ranking in the country, but that is not even the best on the team. Juniors Konrad Zieba and Sam Shropshire are ranked No. 16 and No. 41, respectively.

“We’re a confident group and it’s the same as it has been all year,” Kirchheimer said. “We’re a decent group and we’re going to keep trying to do our job.”

Other team members echoed Kirchheimer’s sentiment that these matches and their practices this week will be treated like every other week so far.

Coach Arvid Swan said he is not concerned with his players getting over-excited for the chance to win a Big Ten title as six of his seven starters are upperclassmen — an edge in experience NU has had all year.

“These guys are pretty mature,” Swan said. “We’ve played a lot of big matches this year so I think that’s business as usual.”