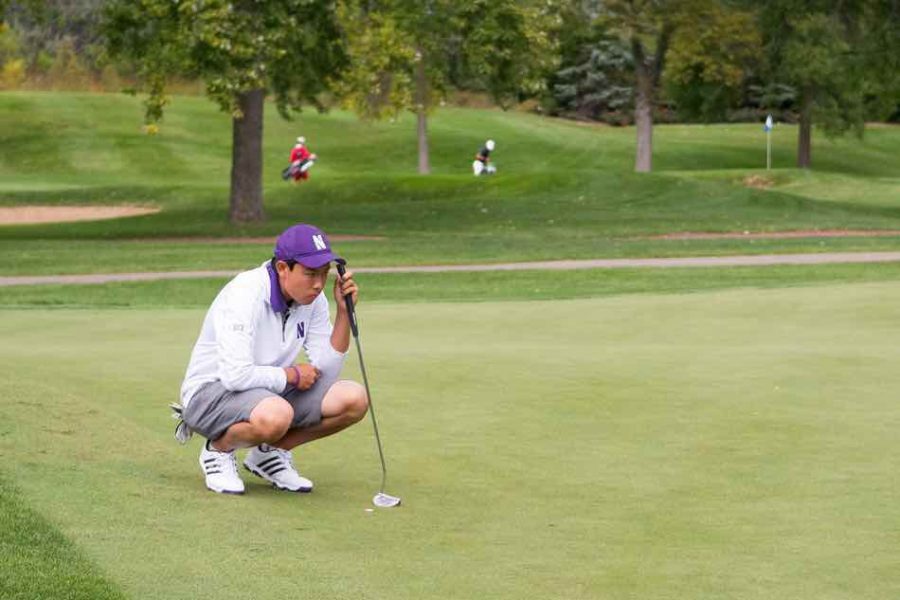 Dylan Wu squats on the green before a putt. The sophomore finished 18th in last year’s Big Ten Championships.

It all comes down to this weekend for Northwestern, as the Wildcats open postseason play at the Big Ten Championships in Newburgh, Indiana.

The team is coming off back-to-back impressive finishes at its previous three tournaments and looking to carry those performances into this weekend.

“Competing for that Big Ten championship would be amazing,” sophomore Dylan Wu said. “It’s one of the goals I’ve had the entire year, being in that final group with all the pressure. It’s the best moment you want to be in, where all that pressure is, and that’s where you can step up and play your best.”

At its previous two tournaments NU closed with its best rounds, but its most impressive performance came when the team strung together three consecutive strong rounds at The Goodwin in late March.

Coach David Inglis will be looking for that final round intensity from the start this weekend.

“We have to make sure that we’re learning the golf course and really preparing well for the next day,” Inglis said. “We’ve shown that our golf seems to get better as the tournament goes on, so the better we start, the better we’ll finish.”

Learning the holes will be important for the Cats, as only two of the current team members — Wu and senior Josh Jamieson — have played the championship course at Victoria National Golf Club before. The team’s other representatives at the championships will be senior Andrew Whalen, sophomore Sam Triplett and freshman Ryan Lumsden.

Last year Wu finished second on the team, but NU finished seventh and failed to qualify for an NCAA Regional tournament. This year, Wu believes his previous rounds on the course will help him improve that result.

“It definitely helps having experience on the course,” Wu said. “You know the way the holes look like, and you know how hard the holes play. It’s always nice to go to a place you’ve played before and had success at.”

Like Wu, Jamieson said he feels confident that his experience on the course will help him throughout the weekend.

That experience, however, doesn’t mean anything without proper preparation, and Jamieson said he is making sure his game is ready for the upcoming challenge.

“I’m just trying to work on the ball striking,” Jamieson said. “Victoria National, much like Purdue, on the face of it is quite a long course, but somehow you seem to get quite a lot of birdie chances, so if you’re hitting the ball solidly you’ll give yourself a few chances.”

This year’s Cats have so far followed in the footsteps of last year’s team, coming in third place at the Boilermaker Invitational after landing in the middle of the standings at the Kepler Invitational.

Unlike last year, however, this year’s team took down then-No. 1 USC at The Goodwin and finished eight spots higher in the final standings than the 2014-15 squad.

“Our guys feel pretty good,” Inglis said. “We know that when we play well we’ve got a chance to beat anybody, so we just have to do the things in preparation for competition to help us play better.”

Although Wu and the rest of the squad have their sights set on the final group, the challenge will be stiff, and with formerly ranked Penn State and Purdue along with No. 2 Illinois competing in the tournament, NU faces an uphill battle.

Despite tough competition, the Cats were almost in the final group at Purdue, and Wu is ready to take the final step.

“Having our team in the final group that last day would be really nice,” Wu said. “I just want to have that experience of trying to be that anchorman. It’s just one of the goals as a player in the Big Ten.”