Lacrosse: Wildcats looking for the ‘green light’ against Penn State this weekend 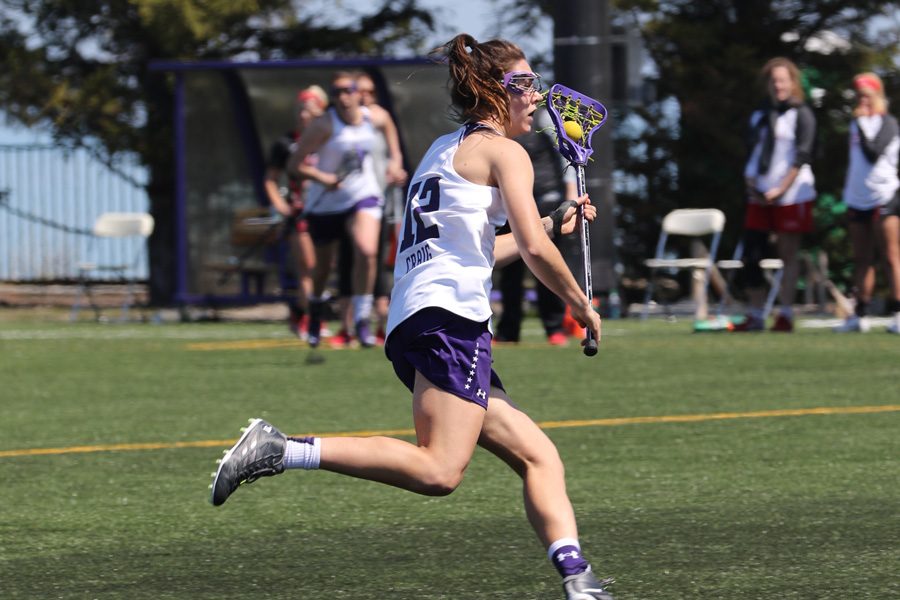 Kaleigh Craig runs down the field. The senior leads Northwestern with 36 goals on the season.

Northwestern will have a chance to avenge last year’s early Big Ten Tournament exit when it travels to State College, Pennsylvania on Saturday to take on Penn State in a rematch of the conference tournament semifinal game.

The No. 12 Wildcats (7-7, 2-1 Big Ten) will take on the No. 14 Nittany Lions (10-4, 2-1 Big Ten) with just two games remaining in the regular season. Last year, Penn State swept the season series, defeating NU twice by a combined scoring margin of 27-20. The Cats have also struggled this year against high-profile opponents, going 3-7 against ranked teams.

Coach Kelly Amonte Hiller said the team is aware of the importance of winning this game for its tournament chances, and the team will use last year’s loss as extra incentive.

“The motivation of knowing that you lost to a team twice last year definitely helps,” Amonte Hiller said. “For us right now, any opponent is a blessing and we want to go out there and just showcase what this team is all about.”

NU must finish the regular season and conference tournament with a combined winning percentage of at least .500 to qualify for the NCAA Tournament. The Cats haven’t missed out on the tournament since the team finished 8-8 in 2003.

After splitting last week’s games against No. 6 USC and Rutgers, NU cannot afford to keep trading wins. The Cats’ last two games of the regular season are against top-15 teams which currently sit ahead of them in the conference standings.

Amonte Hiller said the team’s next two games are must-wins.

“These games are so important, we want to play our best, and put ourselves in the best position for the Big Ten Tournament,” Amonte Hiller said. “Then hopefully we can qualify for postseason play.”

Senior attacker Kaleigh Craig finished last week with 9 goals and was named the Big Ten Co-Offensive Player of the Week. However, Craig said the team still needs to focus on finishing its opportunities and putting shots on cage.

Craig said she is worried the Cats will get complacent after routing the Scarlet Knights last week, 20-9, and wants to keep the team focused.

“We just gotta keep getting better every day, honestly,” Craig said. “We really can’t take days off from shooting and dodging and whatever we’ve got to do that’s extra. It’s really easy to get comfortable when you start doing well but you gotta just not.”

Senior defender Spring Sanders has participated in the NCAA Tournament every year of her collegiate career. But that streak is currently in jeopardy.

Sanders exploded against the Trojans last week, scoring two goals late in the game. She said Amonte Hiller “gave her the green light,” and she took advantage, recording her first two goals of the season.

“As long as we play tough, we play strong and we stay committed for 60 minutes, I think we will absolutely come out with a win,” Sanders said. “If you see the green light, go — I’m looking for the green light.”