Baseball: Curbing opposing offense will be challenging for Wildcats this weekend 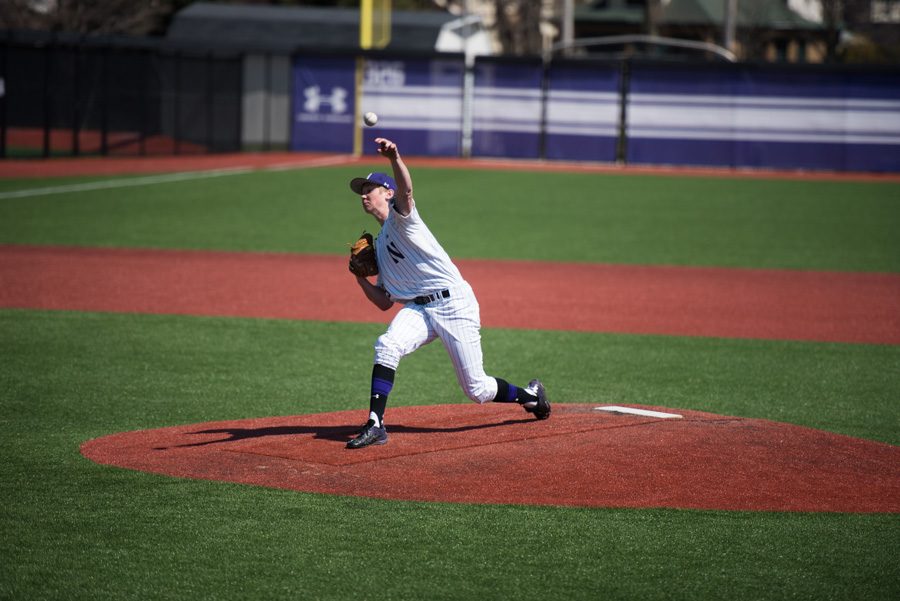 Matt Hopfner delivers a pitch. The junior has given up 9 earned runs in 10.2 innings this season.

Northwestern will face another top-tier Big Ten program this weekend, the latest contest in a seemingly endless stream of quality opponents.

The Wildcats (10-27, 2-10 Big Ten) host a Minnesota (22-11, 6-2) team this weekend that currently sits tied for second place in the Big Ten, one-half game behind first-place Michigan State. Facing an offense that leads the conference in batting average and hits, NU’s pitching staff may have a difficult time limiting the Golden Gophers’ potency.

“They’re kind of a ‘death by a thousand paper cuts’ type of offense,” junior pitcher Cooper Wetherbee said. “Compared to Michigan, who hit a couple dingers against us and really put some good lumber on the ball, what we see from Minnesota is they’re just really good at putting the ball in play.”

As a relief pitcher, Wetherbee said he always tries to hit his spots right away instead of throwing as hard as he can, something that will be especially important against an offense like Minnesota. However, he and his bullpen mates may get a bit of a reprieve come Friday.

After using 10 pitchers in Wednesday’s 12-10 win over Chicago State, senior pitcher Reed Mason is slated to start for NU on the mound in Friday’s series opener. Mason’s start is his first since tossing 7.1 innings and giving up just 3 runs in his longest start of the season.

“He’s just done a great job of keeping guys off balance,” Allen said. “When he needs to make pitches down in the zone, he’s done it. That’s been the key to his success.”

Mason starting the game strong will be important for a Cats team that ranks 254th out of 295 Division I college baseball programs in ERA and second-to-worst among Power 5 conference teams.

Following Mason in the rotation will be sophomore Dan Kubiuk on Saturday with Sunday’s starter yet to be announced. Kubiuk said he isn’t fazed about facing the Big Ten’s top offense.

“We want to do our part in just being aggressive, no matter who we’re playing, and trust our stuff to know that it’s good enough to get guys out,” Kubiuk said. “And we know the coaches are going to put us in good spots, we just have to execute on our end.”

Pitching has been a struggle for NU all season, as the Cats have just two pitchers with an ERA lower than 4  — Mason and freshman Danny Katz. However, NU’s offense has been clicking for most of the year, as the program is fifth in the Big Ten in batting average.

At this point in the season though, Wetherbee said the Cats just have to focus on themselves.

“One thing we talk about with coach Reynolds all the time is basically ‘control what you can control,’” Wetherbee said. “When you have a chance to put them away, be better than that 0-2 pitch that kind of slips over the plate where they can get a good barrel on it, and really go out and take pride in finishing off those at-bats.”