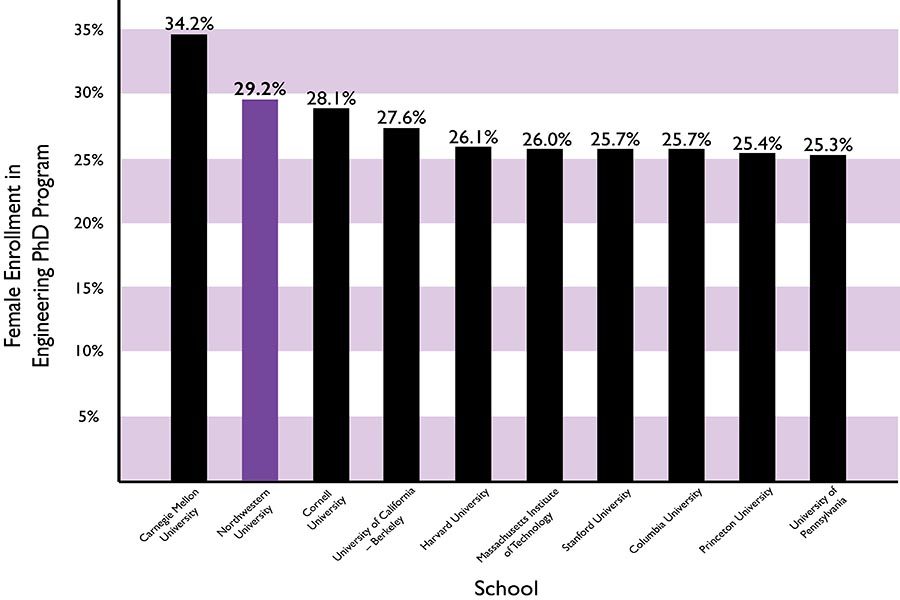 Northwestern’s Department of Materials Science and Engineering plans to achieve gender equity in Ph.D. enrollment and faculty makeup within the next 15 years.

The McCormick School of Engineering department has set a goal to increase the proportion of female Ph.D. students to between 45 and 55 percent by September 2020, and they plan to increase female faculty members to the same proportion by 2030, said Laurence Marks, a materials science and engineering professor.

“The faculty recognized that gender equity is an important issue, and it is something we have to pay attention to,” Marks said.

The department is partnering with the Chicago Foundation for Women, a non-profit women’s advocacy organization. The foundation sponsors the 100% Project, which launched last year with the goal of ending gender bias and helping Chicago-area women achieve economic security.

Gender bias is one of the main issues faced by women and girls, said April Callen, the foundation’s manager of communications.

“Women are making up the bulk of college enrollment and we are gaining more opportunities and advancements, but not rapidly enough considering that we do make up half the population,” Callen said.

By next year, the department aims for its Ph.D. students to be comprised of 33 percent women. By 2018, its goal is 40 percent, Marks said.

Although there are fewer female graduate students than female undergraduates in McCormick, the difference is less a result of gender bias and more a result of students — both men and women — being less interested in academia after graduation, said Ellen Worsdall, McCormick’s assistant dean for student affairs.

“I see just as many men rejecting academia as I do women,” Worsdall said. “I wouldn’t say women are more discouraged to go into it. It’s because there aren’t as many at the collegiate level, so the impact appears to be greater.”

Both male and female students prefer to enter the industry after graduation instead of continuing their educations, said McCormick junior Michelle Wang, who is also president of Northwestern’s Society of Women Engineers.

“A lot of times, a bachelor’s in engineering is enough qualification to give you the job you’d like,” Wang said. “Many people feel like they don’t need a higher degree in order to get a stable job or the job they want.”

Data gathered in 2013 by the National Science Foundation showed women made up 8 percent of the mechanical engineering workforce and 11 to 12 percent of all other engineering fields.

“Students need to see people like them at the front of the classroom,” she said.