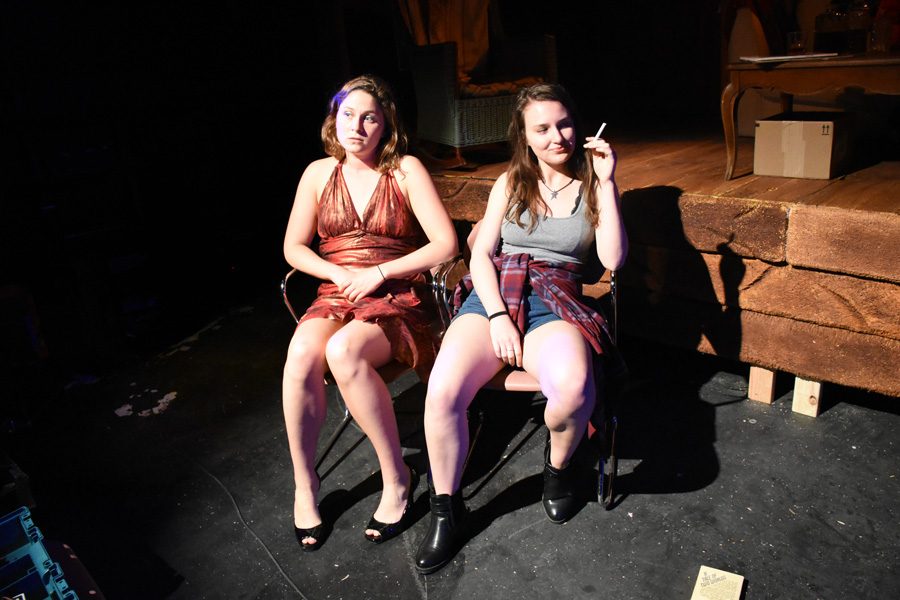 Two performers practice a scene in the new play “Strangers of Intimacy.” The play is being produced by Vertigo Productions, a theater company that exclusively presents student works.

Communication senior Marion Hill decided to explore the nature of relationships, such as those between exes, in a play she wrote that premieres this weekend at Shanley Pavilion.

“Strangers of Intimacy” is being produced by Vertigo Productions, a theater group that exclusively presents student work. Hill, who said she did not have much theater exposure before writing the play, said she first wrote it for her “Introduction to Playwriting” course and then submitted it to Vertigo for consideration.

The show follows Roland and Maria, a couple who flees to the mountains of French Canada after being driven away from New York City by a scandal. They take refuge with Maria’s sister and her daughter, while awaiting the arrival of their brother. As the characters wait, Maria finds herself drawn to her brother’s wife.

When Hill first began writing she was interested in relationships within marriage, family or friendship, Hill said. She also delved into unconventional attraction, such as between a married person and someone who isn’t their partner, ex-husbands and wives, and queer partners.

Hill said she explored how characters often react to those relationships and dynamics with strong emotions and anxiety, as is depicted in the play.

“I was interested in a lot of ideas around attractions and infatuation between two people,” Hill said. “That was sort of the theme I started with and on top of that, as new characters popped up more and more, themes just came along with it.”

Communication senior Max Spitz, who directs the play, said he was drawn to the play because of its focus on strong female characters and its emphasis on bisexual and queer relationships.

“What makes it so unique to me is the language Marion uses as a playwright … really strongly connects to the different forms of relationship we try to create,” he said. “It’s so easy to project intimacy on just sex, and what excites me about the show is it dissects that form of intimacy, and it gives us a strong female character that we don’t have often enough.”

Throughout the production process of the show, the script constantly evolved based on what happened during rehearsals, said Ellen Ehrsam, the show’s producer and a Communication junior. Unlike a professionally-written play, the production team only finalized the draft for Hill’s play last week, Ehrsam said.

Spitz also played a role in which he contributed to Hill’s drafts and work with her through the editing process. Rarely do directors have the ability to work so closely with the playwright, Spitz said.

Hill said the process was especially different for her because she is used to writing and directing her own screenplays.

“You just kind of write the play and just give it to them, and they just go and do it,” Hill said. “That’s really different from directing my own writing, especially for the screen, which is a whole different style thinking about a lot more visual composition as well as dialogue.”

Hill said she was struck with how the themes she wrote about manifested in the play in ways she never could have expected.

“It’s really interesting to see how actors completely transform what the character should be like in my head, and it’s totally different but it still works,” she said. “That’s one of the coolest parts of it.”