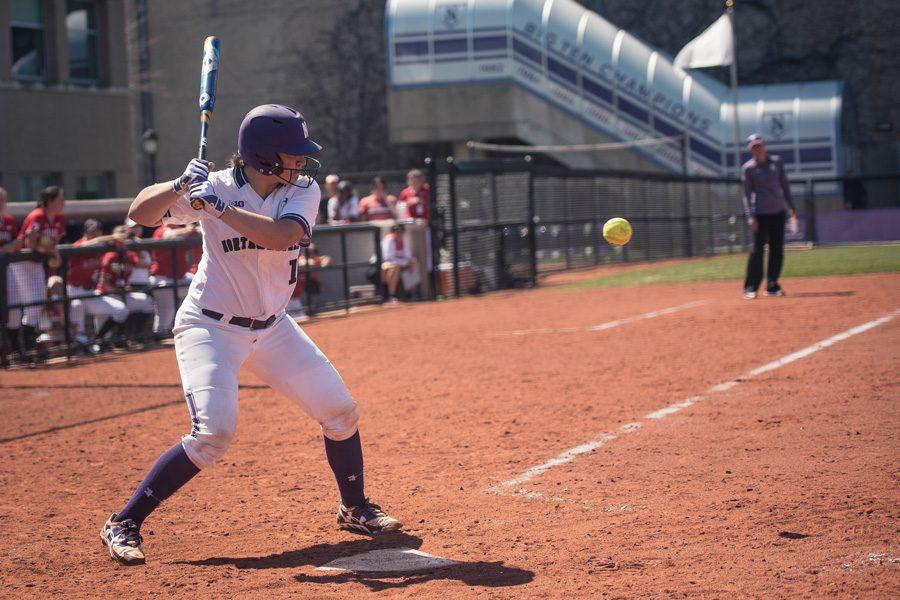 Sammy Nettling prepares to hit the ball. The sophomore catcher was held hitless in 4 at-bats in Sunday’s series finale.

At times, Northwestern showed toughness and resolve but was once again plagued by late-inning woes as it was swept by Nebraska over the weekend.

Friday’s game featured a battle between the teams’ two aces: senior Amy Letourneau for the Wildcats (16-23, 7-7 Big Ten) and junior Cassie McClure for the Cornhuskers (28-14, 9-5). The matchup didn’t disappoint, as both teams struggled to get any offensive rhythm early on. Letourneau was almost unhittable for the first six innings, with her lone mistake coming off a solo home run by shortstop Alicia Armstrong in the fourth inning to give the Cornhuskers a 1-0 lead.

NU didn’t fare much better against McClure, but the Cats’ bats came alive in the sixth inning.

Sophomore catcher Sammy Nettling stepped up with the bases loaded and smoked a 2-run single to put NU up by 1, scoring freshman third baseman Morgan Nelson and senior shortstop Andrea Filler. Junior first baseman Alcy Bush followed that up by driving in another run with another single.

It looked as if the Cats were going to steal the first game of the series, but Nebraska’s right fielder Alyvia Simmons hit a solo home run to start the seventh inning, and then center fielder Kiki Stokes hit a 2-run shot later in the inning that gave Nebraska a lead it wouldn’t relinquish.

“It was a tough weekend,” coach Kate Drohan said. “There were moments when we battled, but we also missed some opportunities.”

Freshman Kenzie Ellis started the game Saturday for the Cats but only lasted 2.1 innings before being yanked for fellow freshman Kaley Winegarner. In her short outing, Ellis allowed five walks and then Winegarner and junior Nicole Bond combined to walk eight more Nebraska batters the rest of the game. The free passes allowed the Cornhuskers to score 8 runs on only five hits.

Things got off to a great start for the Cats on Sunday, however, as Letourneau hit a 3-run home run to give her team an early 3-0 lead over the Cornhuskers. Both Ellis and Letourneau had prepared to start in the circle, but Drohan said she decided to pitch Ellis for the second straight game in hopes of saving Letourneau for the later innings.

Ellis was able to last longer in her second start, something she attributed to her mindset.

“A lot of softball is mental,” Ellis said. “I came in with a lot more confidence (Sunday) and that helped.”

When Ellis left in the sixth inning the game was tied 5-5. Winegarner relieved her but struggled, only lasting a third of an inning while allowing 4 runs to score, prompting Drohan to put Letourneau in to pitch.

Letourneau was solid on both sides of the ball. She pitched 5.2 innings in the 11-inning affair while only surrendering 2 runs, both unearned. She was 3-for-4 from the plate with 2 home runs and 5 RBIs.

“I just swung like I’ve been swinging all year,” Letourneau said. “But it would’ve been nice to get the win.”

Letourneau’s second home run of the day cut the Cornhuskers’ lead to 9-8 in the bottom of the sixth, and then sophomore second baseman Brooke Marquez hit a home run just over the left-field fence to tie the game in the seventh and send the game to extra innings. But Marquez’s home run was the last NU scored.

Freshman Bri Cassidy and junior MJ Knighten scored in the top of the 11th inning on a throwing error by Nelson to give the Cornhuskers a 11-9 lead, which would eventually hold for the final score as Nebraska swept NU.

Drohan said although her team showed good toughness at times during the series, they need to be able to put a complete game together.

“There were moments when we got big hits and big outs when we needed,” Drohan said. “Looking forward, those are the things that we need to focus on.”