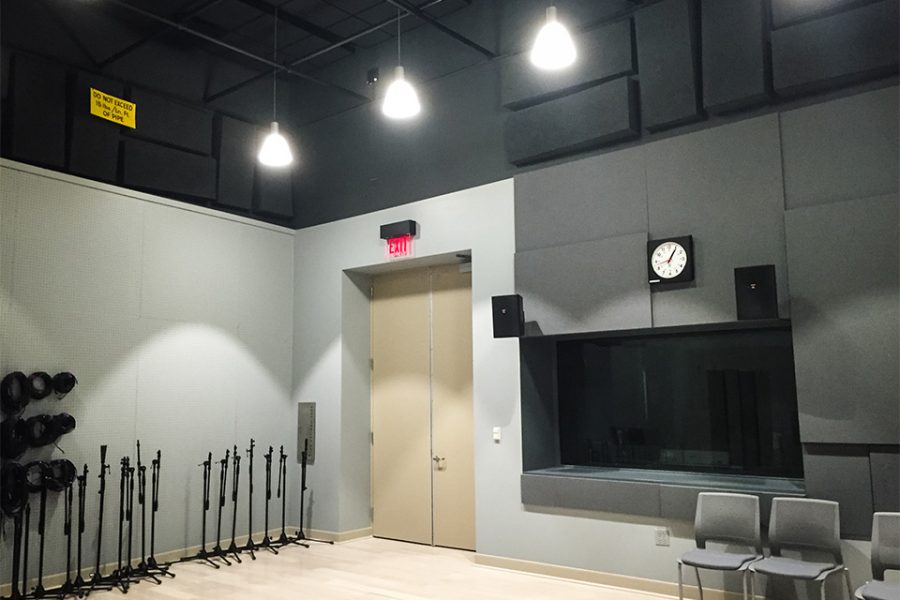 The School of Communication is expanding its sound-focused initiatives, including a professional recording studio in Louis Hall that opened last month and a new master’s program.

“We were blessed with already having the shell of the studio that we did not have to build — the walls were there — but everything from the walls out needed to be improved,” said Rick Morris, an associate dean in the School of Communication. “There’s three or four different types of soundproofing. The ceiling has three different layers of ceiling. We made it super quiet. … We added the iso booth for loud things like drums or very soft things like voice overs. It’s very flexible.”

Planning for the new recording studio — which Morris said cost about $1 million to build and can hold about 40 people — began last summer, and construction started in the fall. After testing and training in early February, the studio opened its doors last month.

Housed in Louis Hall and unofficially dubbed the “sound stage,” Morris said the space would primarily serve NU students and faculty, but would also remain open to visiting artists. As of now, there are no policies in place about who may access the studio.

Communication Prof. Stephan Moore, a sound artist and composer, said the space matches that of a professional-grade studio. His current class, Introduction to Music Production, uses the space, and he said future courses will use the studio as well. Moore said students would need extensive training before using the studio due to the complexity of operation and expensive equipment. Eventually, however, he said he’d be open to students operating the space independently.

Along with the sound stage, the School of Communication has also launched two other initiatives geared at strengthening connections between its various sound programs. In January, a group of Communication professors started “SoundTank,” a podcast which shares a name with a new collaborative space for sound artists and engineers in Frances Searle Building. And in the fall, the school will welcome its first class of master’s students to a new graduate program in Sound Arts and Industries.

“(There’s) this new field known as sound studies that’s just emerged in the past 10 or 15 years,” said Communication Prof. Jacob Smith, who directs the new MA program. “You might not normally have a sound scientist and a sound studies person and a film sound designer all in a room talking to each other, but we thought there were a lot of great potentials to making that happen.”

Smith said he hoped for about 20 students to enroll in the program from two primary cohorts: fifth-year undergraduate students and industry professionals looking to reshape their careers. The one-year master’s program — three quarters at NU and a summer internship — will combine sound arts, studies and science, Smith said.

All of these new programs and spaces, Moore said, are aimed at connecting NU’s extensive auditory resources and uniting them around a common goal.

“There is an initiative right now to work a lot more with sound,” Moore said. “We’re trying to connect all of the different sound-related faculty from all the different disciplines into one conversation.”