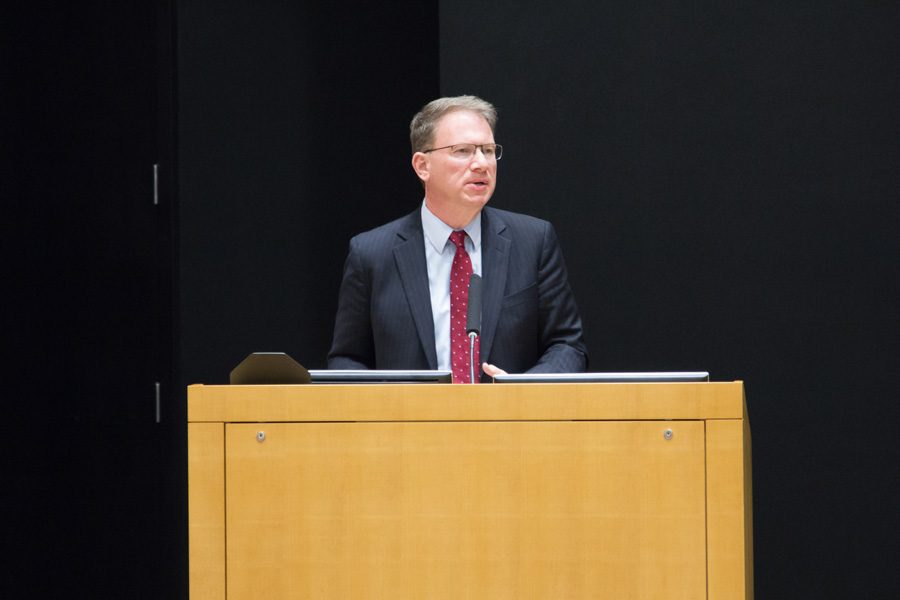 Journalist Jeffrey Goldberg speaks at the McCormick Foundation Center on Thursday. Goldberg, who writes for The Atlantic, recently wrote “The Obama Doctrine,” a 19,000-word profile of the president’s foreign policy.

“There is not an obvious overarching Obama doctrine,” Goldberg said. “That was one of the key challenges. When you think about presidents and their foreign policy doctrines … you can kind of fit those on a bumper sticker. But there is a problem when you’re looking at the management by a reluctant president, who is a mainly domestic policy president, in a multi-polar, fractured world.”

Goldberg, who previously worked for The New Yorker and The New York Times Magazine, addressed a packed audience in the McCormick Foundation Center about his latest cover story, journalism and growing tension in Israeli-American relations. Sponsored in part by Hillel, the event focused on Goldberg’s Jewish background and his analysis of Middle East affairs.

In his hour-long speech, Goldberg touched on what he described as Obama’s five foreign policy doctrines: avoiding military action, understanding limitations, redefining American indispensability and exceptionalism and working with a messy situation he inherited from the Bush administration.

Goldberg told The Daily his unprecedented access to the president — five separate interviews over four months totaling roughly six hours of on-the-record time — allowed him to go beyond boilerplate speeches and political rhetoric.

“He’s very easily bored,” Goldberg told The Daily, referring to the president. “If he starts tap tap tapping that pen, you’re dead. You’re just dead. … I had to ask some of the usual questions over the course of these interviews, but I wanted to go down a couple of levels to try to get at the way he constructs his thinking and the way he sees America’s role in the world.”

Goldberg said the article, printed as The Atlantic’s April magazine cover story, caused a stir in the international community because of Obama’s candid quotes and harsh criticism of some world leaders.

He told The Daily he came away satisfied with the article, but added that with more space (the article was initially 26,000 words) he would have liked to elaborate on the Iran Nuclear Deal — a 2015 agreement reached by the Obama administration which limits Iran’s ability to construct bombs.

“He has this quality that we, in journalism, admire that I think frustrates his staff,” Goldberg told The Daily. “Which is that he’s unusually willing to do public analysis of his beliefs… while they’re going on. In other words, he’s in the balcony watching the presidency unfold, but he is the presidency.”

Weinberg senior Jonathan Kamel, who helped organize the event, said bringing “the most prominent Jewish-American journalist at this moment” to campus falls squarely in line with Hillel’s mission — engaging students in discussion about Jewish culture.

“He’s so vocal on issues that American Jews care about, and he seems to have this uncanny tap into the American-Jewish psyche,” Kamel said. “He seems to understand the fears, anxieties, hopes, dreams of American Jews.”