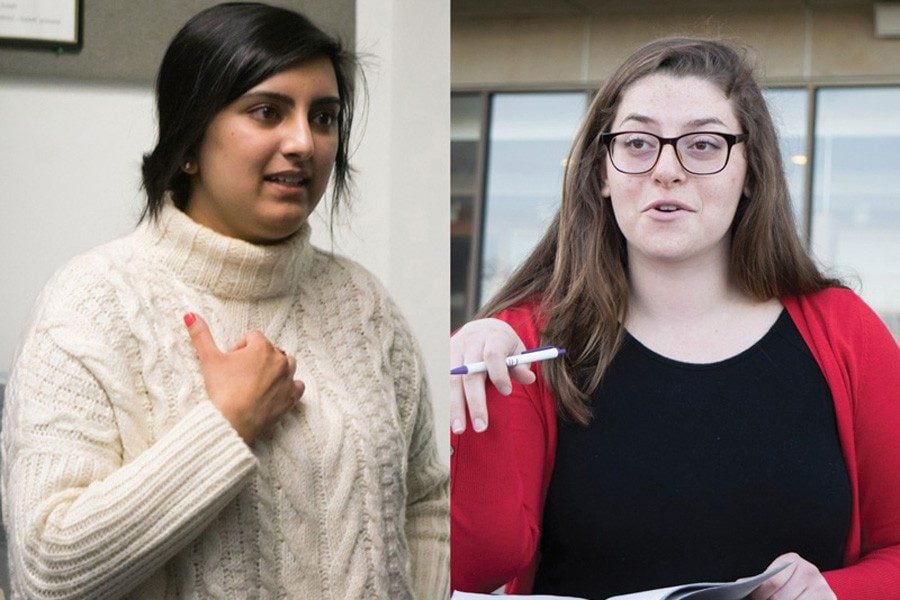 SESP sophomore Kevin Corkran, who was a member of the ASG election commission, told Cilento’s campaign at about noon on April 8, the second day of voting, the race was “extremely close.” Later that afternoon, about an hour before polls closed at 5 p.m., he told her campaign the voting margin was within five to 10 votes.

As of Thursday night, Thomas said the election commission has reopened its investigation into the leaked voting information, a decision she said was based on information obtained by The Daily.

Cilento, a SESP junior, and Vinson, a McCormick junior, beat Weinberg junior Joji Syed and Weinberg sophomore Archit Baskaran by 81 votes out of the 4,060 votes cast. News of the leak comes just more than 24 hours after Cilento and Vinson were sworn into their new positions as president and executive vice president at ASG Senate on Wednesday night.

Cilento said she initially omitted the information about receiving a second update at 4 p.m. because she was overwhelmed by negative social media posts about her and Vinson and the divisive election cycle.

“I was really personally worried and felt people were against us,” Cilento told The Daily. “I had a freakout and didn’t want people to hate us even more. I should have been up front about that from the beginning.”

Corkran, who was a senator representing Students for Ecological and Environmental Development, resigned from ASG on Thursday. As a member of the election commission, Corkran was one of seven students in ASG who oversaw the elections.

“It was a complete lapse of my judgement and definitely does not reflect the other members of the commission,” Corkran told The Daily in a statement.

Thomas said Corkran “lied” to her, only admitting to telling Cilento’s campaign the vote was “extremely close” at about noon.

Cilento said the information Corkran gave them was unsolicited.

“I’m sorry to the student body for not being totally upfront,” she told The Daily. “I don’t honestly think there would have been a large change in the results. Our outreach strategy was always to go hard on both days of voting.”

In multiple social media posts and messages obtained by The Daily, students urged others to vote for Cilento and Vinson, saying the voting margin was narrow.

“Our strategy the entire time was to express the fact that we knew the vote was pretty close from the beginning because it was so contentious,” Cilento said. “We had to tell people it was close to mobilize people.”

Thomas said Syed and Baskaran were leading by about 200 votes in the first few hours polls were open. When Thomas woke up the next morning at about 9 a.m., she said the margin was shrinking.

Thomas said she told her election commission at about 11 a.m. on April 8 that Syed and Baskaran were leading by about 100 votes. At about 4 p.m., she said she told them it was “pretty close” with about five or 10 votes between the two tickets. Thomas said she is allowed to share that information with her commission but members of the commission are prohibited from sharing it with others.

Thomas alerted Syed on Wednesday — about an hour before Cilento and Vinson were set to take the oath and assume their positions — that information was leaked during the campaign, according to an email obtained by The Daily.

In the email, Thomas told Syed the commission discovered “around when polls closed” that Corkran had told Cilento “several hours earlier that the election was close.” Thomas said Corkran was kicked off the commission and the commission’s initial investigation found Cilento and Vinson “had done nothing wrong.”

“There’s no way to prove if it had any effect and so we went forward with releasing the results,” Thomas told The Daily.

Syed said she was caught off guard by Thomas’ email and said her campaign had no inside information about the voting margin throughout the polling period.

“It’s unfortunate that we’re dealing with this almost a week later,” Syed said. “What we look forward to is a quick, fair and just resolution to all of this so that ASG can move forward and adequately represent the student body this upcoming year.”

The only people who had access to voting data during the election are Thomas and Joe Lattal, an administrator in the Campus Life office who manages the website used for voting. Brent Turner, executive director of Campus Life and one of ASG’s advisers, said ASG elections are a student-run process.

“Associated Student Government has their own codes and guidelines,” he said. “Administrators are here to support and advise and serve as advocates for all students.”