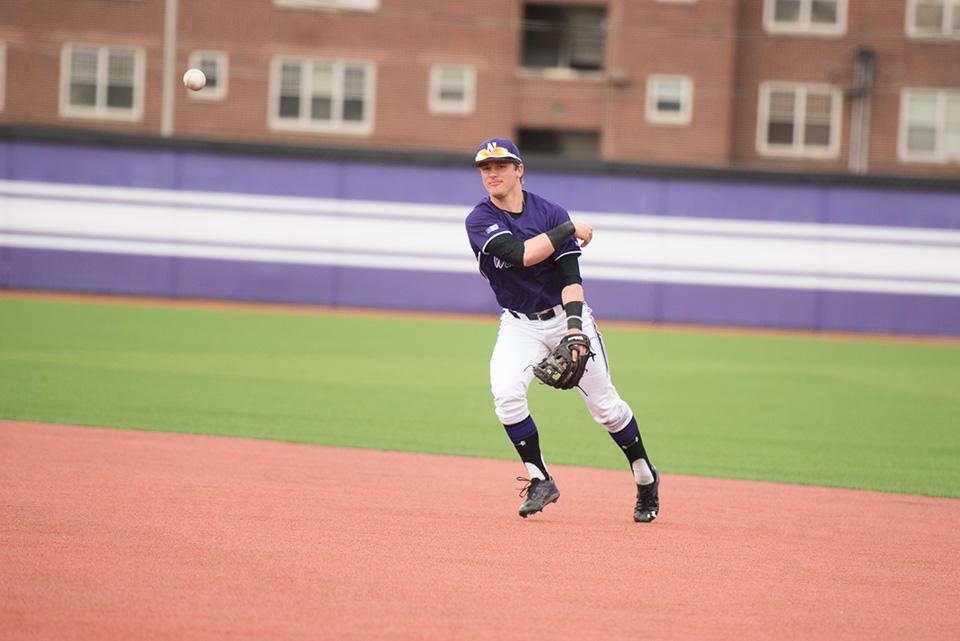 For Jack Dunn and Willie Bourbon, Northwestern’s freshman middle infielders, everything is a competition.

“I mean, we’ll race to the showers,” Dunn, the shortstop, said.

In a season that has produced three times as many losses as wins, NU hasn’t had much to hang its hat on this year. Since opening the 2016 season with a 4-4 record, the Wildcats have only doubled their win count, scattering four wins among 20 losses. Through Monday, NU ranks fifth in the Big Ten in team batting average but dead last in ERA, a mark almost a half-run higher than the second-worst ERA held by Purdue.

However, the competitive relationship between Dunn and his roommate — and the production that’s resulted on the field — is a bright spot that has coach Spencer Allen, a freshman in his own right, extremely giddy.

“It’s not so much of, ‘Who can hit for a higher average,’ it’s just a competition to prepare,” Allen said. “That’s ultimately what you want in a program.”

Dunn and Bourbon said they first met each other on their official visit in October 2014, spending a weekend on campus and watching the football team play Nebraska. Ever since then, Bourbon said they gravitated toward each other, texting back and forth during their senior year to keep up with their final high school seasons.

Now that they’re together at NU, Bourbon said they push each other every day — both to become better ballplayers and better people.

Despite his no-nonsense attitude on the field, Dunn loves to have a good time.

A back-to-back state champion during his final two years of high school, including a senior season in which he didn’t make an error in the field, Dunn oozes confidence in everything he does. Allen has heaped praise on his freshman shortstop on how he has carried himself over the course of this year’s hardships, especially whenever Dunn rebounded from a bad game or poor performance.

Part of that confidence existed in high school too, when Dunn “kept everybody loose,” said Andy Harlin, his coach at Blessed Trinity Catholic in Roswell, Georgia.

“I thought he was like real quiet (at first),” Harlin said. “But his sophomore year, we’re down in Fort Myers, Florida, and he starts dancing at this restaurant. And I was like, ‘OK, he’s not as shy as I thought he was.’”

Dunn’s sophomore season was his first on the varsity team for Blessed Trinity. Harlin said Dunn was a very consistent player for his age, especially on the defensive end. In his first-ever game, Dunn made a diving stop at third base to clinch the win.

While matriculating through the program, Harlin said Dunn would always be the first one to joke around with his teammates during practice. As soon as he takes the field though, Dunn is a completely different person.

“When he’s between those (foul) lines, he’s 180 miles an hour, he’s locked in to what’s going on in the game,” Harlin said. “He knows when to have a good time and he knows when to work.”

The confidence in his own abilities fuels Dunn’s competitiveness and rubbed off on his teammates in high school, Harlin said. He said during batting practice, Dunn would be “egging on” his teammates to try to hit the ball past him in the field.

When Dunn arrived in Evanston — following in the footsteps of his uncle, former NU baseball player John Trautwein — his coaches didn’t know what to expect from him. He couldn’t throw in the fall due to elbow issues and they couldn’t get a good read on him until closer to the start of the season.

But what Dunn did fielding the ball impressed his coaches, especially volunteer assistant coach Tad Skelley.

“Jack’s the one that positions all of our guys — it comes from me to him, and he’s the one that’s on the field kind of like a quarterback,” said Skelley, who works with infielders and outfielders on defense. “That’s a lot to ask for a freshman.”

Throughout the struggles of this season, Dunn has remained consistent, just as Harlin said. And even though Dunn is modest about the confidence that Allen and Harlin rave about, he said the way one reacts to such difficulties is important above all else.

“My mom’s always told me when I was little, she’d always say, ‘Stay even, don’t get too high when you’re winning, don’t get too low when you’re losing,’” Dunn said. “And it’s always really stuck with me, because life throws you curveballs, up and down all the time, but it’s really how you handle that.”

A tale of two freshman years

At Stevenson High School in Lincolnshire, Illinois, more than 4,000 students roam the hallways. It is exceedingly rare for a freshman to make the varsity baseball team because of the sheer number of kids, Stevenson coach Patrick Block said.

Bourbon was the exception.

“Probably one of two in the last 10 or 15 years,” Block said. “As a freshman he was a really good hitter at the freshman level. When he came up to varsity he continued that.”

During this unlikeliest of seasons, Bourbon fell under the tutelage of teammate Adam Walton, who is now a redshirt junior shortstop for the University of Illinois. Walton took it upon himself to be a mentor to the new freshman.

The pair quickly formed a relationship that resembled a big brother and little brother, Bourbon said. He added that Walton drove him to all the practices and workouts, because Bourbon was too young to obtain his license, and they bonded over baseball.

“I was fortunate enough to have older guys when I was younger kind of take me in and show me the ropes,” Walton said. “I was trying to do that with Willie.”

Bourbon struggled at the plate after Walton left for Champaign, but not because he missed his mentor. Block said other teams simply began figuring Bourbon out during his sophomore and junior seasons and learned how to pitch to him.

When Walton returned during academic breaks, he said he sought out his old teammate to go work in the batting cage. As Bourbon inched closer to graduation, Block said Walton attempted to recruit his pupil to the Fighting Illini.

Despite failing as a recruiter, Walton said he still roots for Bourbon.

“Even being in-state rivals, him being on Northwestern, me being on Illinois, still I want to see him succeed as much as he can,” Walton said. “You know, unless we’re playing each other.”

Illinois’ loss is NU’s gain — and Allen’s gain as well. Allen knew about Bourbon from his time working at Illinois in 2015, and when Allen took the Cats’ coaching job he said he was extremely excited to coach Bourbon after missing out on him with the Fighting Illini.

After the suspension of senior second baseman Antonio Freschet after he played just three games, Bourbon was forced into an everyday role in the field even though he was tabbed mainly as designated hitter in NU’s opening series.

Bourbon said Freschet’s suspension didn’t affect him, though. One of the biggest factors for him during the recruiting process was whether or not he’d be able to make an immediate impact, and Bourbon said he set a goal to play every day as a true freshman.

He had already started on one varsity team as a freshman, so why couldn’t he start on another?

“As I stepped foot on this campus that was something I really wanted to do,” Bourbon said. “I really worked my butt off over the summer to do that.”

What’s rare about Dunn and Bourbon’s first year is not only how they both received regular playing time as freshmen but how seamlessly they’ve handled it. Starting, and performing, as freshmen in the Big Ten is no easy task, yet both are likely to start every remaining game for NU this season.

The relationship between these two infielders is a boon for a program that has finished over .500 just once since the turn of the millennium. They said they recognize that chemistry up the middle is important and feel they exemplify it perfectly, even though the first game they played together was two months ago.

“I know that, when we come out on the field — and we’re both competitive guys, we both want to win, that’s our number one goal — it doesn’t matter if we both go 0-for-5 on the day and strike out five times,” Bourbon said.“If we win that game, that’s a good day. Playing with him, knowing that he just wants the best for the team, and I do as well, I think that’s huge.”

“No matter how many wins or how many losses we have, just to know that he’ll always have my back for years to come,” Dunn said. “Hopefully we’ll be at each other’s weddings and stuff like that. My uncle’s always talked about winning and losing, and playing on the field is great, but off the field, it’s the memories you really think of.”