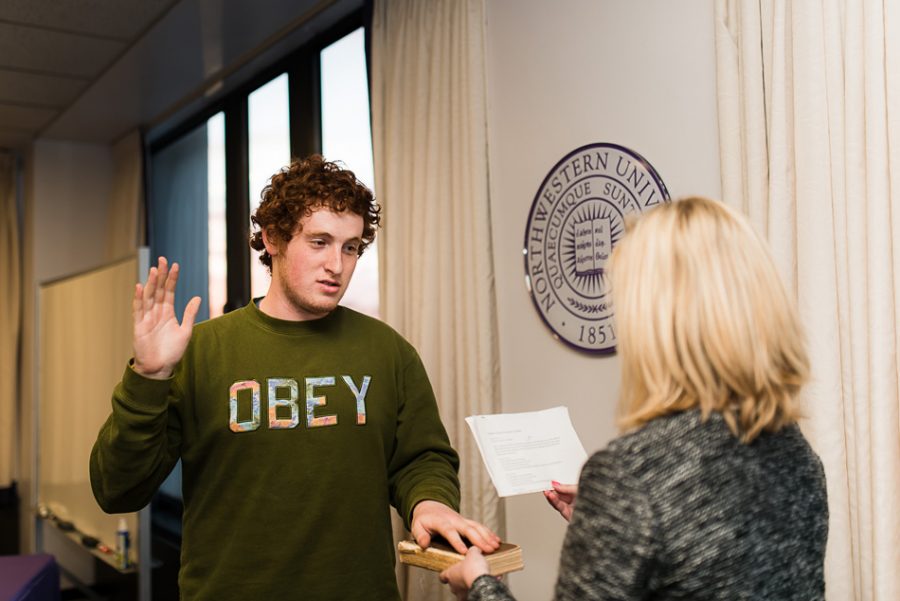 Noah Star remembers a debate at an Associated Student Government Senate meeting during which students argued to bar executive board members from endorsing ASG presidential candidates. Although many supported the idea, Star — a senator at the time — rose before the group and objected.

“I stood up and said very simply, ‘This doesn’t make any sense,’” he said. “Every student is a student and they should have the ability to speak.”

Even though ASG passed a rule this year prohibiting Star, a Weinberg senior, and executive vice president Christina Kim, a McCormick senior, from endorsing a candidate  — which Star said he was “indifferent” to because he and Kim planned to refrain from endorsing anyway — as a senator, he was successful in allowing vice presidents to continue endorsing candidates.

Star said a belief that students should be able to share their opinions regardless of their role in ASG — to be students first and foremost — influenced him and Kim in their eventual roles at the helm of the organization.

Star and Kim — ASG president and executive vice president, respectively — have led the organization since being sworn in last April. For the past year, Star said they have focused on changing ASG’s culture to be more welcoming and accommodating to students both serving in ASG and at large.

SESP junior Christina Cilento, who will be sworn in as Star’s successor Wednesday night, said she worked with him and Kim — along with Weinberg senior Riko Ohashi, ASG vice president for academics — to assemble proposals for the task force to integrate sustainability into the academic curriculum.

“What they’ve done inside ASG maybe sets a precedent for the rest of campus,” Cilento said. “It certainly embodies that student government is trying to be more inclusive and more accessible to students across campus.”

Last month, Senate passed a resolution giving more seats to multicultural Greek organizations and student groups, decreasing the number of seats the Interfraternity Council and the Panhellenic Association had from five each to three each.

But balancing internal reform and external outreach posed a challenge. Amanda Walsh, former president of NU Quest Scholars Network and the group’s senator, said although students may feel safer speaking up within ASG under Star and Kim’s leadership, that improvement did not always reach external organizations. Unlike past presidents and vice presidents, Walsh said Star and Kim made less of a concerted effort to connect with Quest Scholars leaders outside the context of ASG.

Regardless of that fact, the Communication senior said she appreciates the work Star and Kim have accomplished within ASG. She said they have worked to ensure all students within ASG feel safer speaking in Senate and have been quick to call out injustices in Senate and comments that make students feel marginalized.

“Noah and Christina are so busy and so many things happened this year, and obviously they don’t have time to talk to everyone,” Walsh said. “That’s just absurd to expect them to make time for every single student and every single group just because they do so much.”

Kim said although she and Star certainly could have reached out more, they focused on creating an environment within ASG where others could approach them.

Star and Kim also faced challenges within ASG’s executive board: Two transitions in vice president positions occurred during their tenure, prompting Star and Kim to absorb additional responsibilities, said economics Prof. Mark Witte, who has been the organization’s faculty adviser for 15 years.

Regardless, Star said he believes the pair was transparent about all aspects of their term.

“(These challenges are) the way it’s always been,” Star said. “It’s just now you know about it because we decided to own up to it instead of playing pretend.”

Star and Kim’s term will end Wednesday, when Cilento and incoming vice president Macs Vinson, a McCormick junior, transition into the executive roles. Star said he plans to publish an end-of-term report in which he and Kim will summarize their actions.

Although such reports can manifest as extensive documents, Star said they have no desire to write a prolonged account. Instead, they hope to be transparent to their successors about the challenges they faced and accomplishments they made.