Lacrosse: Wildcats claw back to .500 in win over Notre Dame 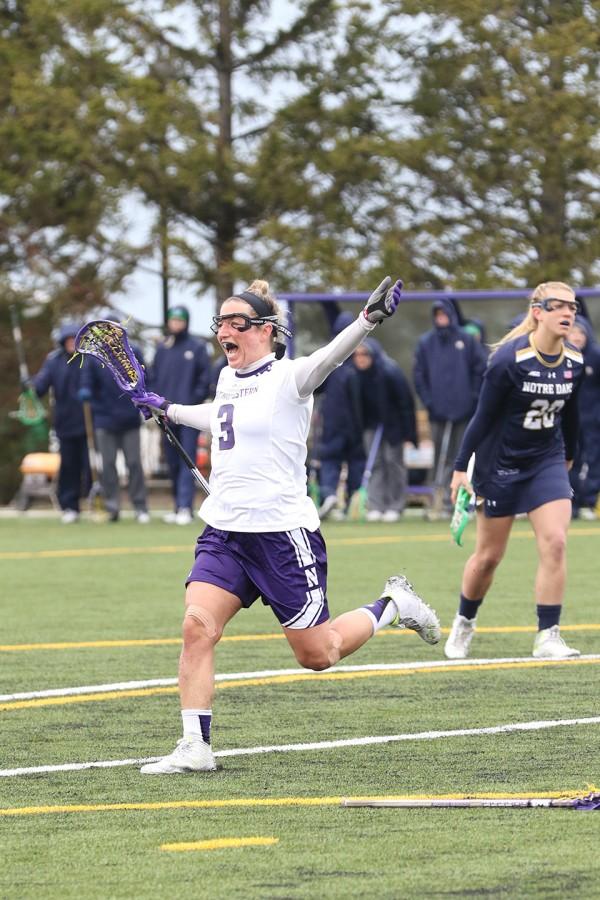 Christina Esposito celebrates a goal against Notre Dame on Sunday. The junior attacker put 4 of the Wildcats’ 17 goals in the net.

The Fighting Irish may have had the fight on Sunday, but they didn’t have the finesse.

No. 13 Northwestern (6-6, 1-1 Big Ten) handed No. 5 Notre Dame (10-4) its fourth loss of the season at Martin Stadium, winning 17-12 amidst aggressive play and cold, rainy conditions.  The Wildcats’ win is their first victory against a ranked opponent since the middle of March and marks a shift in momentum as they stare down the close of the regular season.

Since the second half of their game against Penn, the Cats have outscored their opponents 46-23.

“I think that there’s that little bit of a sense of desperation and it’s showing on the field and it’s showing in a positive manner,” coach Kelly Amonte Hiller said. “In order to be a good team you have to have your best players play well and step up, and they’ve been doing that so that’s huge for us.”

After an early 2-goal deficit, the Cats found their footing and exploded with a 10-1 run that extended into the second half. NU was later able to squelch a 5-1 run by the Cortney Fortunato-led Fighting Irish to secure the victory.

The key to limiting Notre Dame’s No. 2 scoring offense was containing Fortunato, who scored 5 of the Notre Dame’s 12 goals. This came despite Fortunato receiving her second yellow card late in the second half.

“Good players are going to make plays and you have to be able to withstand that pressure and I think that that’s what we did a good job on today,” Fredericks said. “The best antidote to pressure is putting pressure on them, and I think our defense just stepped up and played together on her.”

On the offensive end, NU battled a notoriously aggressive Notre Dame midfield and defense by focusing on the mental aspect of the game.

Despite the swarming Fighting Irish, NU went 15-for-16 on clears, missing just one in the second half. In front of the goal, the Cats fired off 25 shots and capitalized on Notre Dame’s foul-happy defense, scoring on 4 of their 5 free position shots.

“The whole time we were saying we were in control and we know how to handle the pressure,” junior attacker Christina Esposito said. “Our defense has been playing a high pressure defense all week, so we were ready for it.”

Sophomore midfielder Selena Lasota led the Cats with 5 goals, Esposito tallied 4 and Fredericks recorded 3. Four other Cats contributed to the score, a direct manifestation of the offensive balance NU has achieved in the last couple games.

Fredericks, who set a career high with 12 draw controls, said it was a team effort.

“I’m just trusting myself, trusting the girls on the circle to be boxing out and that’s ultimately what’s bringing the success,” Fredericks said. “I’m trying to (draw) to myself and (Notre Dame junior Makenna Pearsall) was just trying to rip it backwards and when someone’s using pure power and you’re using finesse you have to make adjustments, and I think once again that our girls on the circle and behind the line stepped up big.”

Sunday’s win against Notre Dame could feed the Cats some much-needed momentum as they face a handful of formidable opponents before tournament time.

“We don’t have time to hold back any more,” Esposito said.