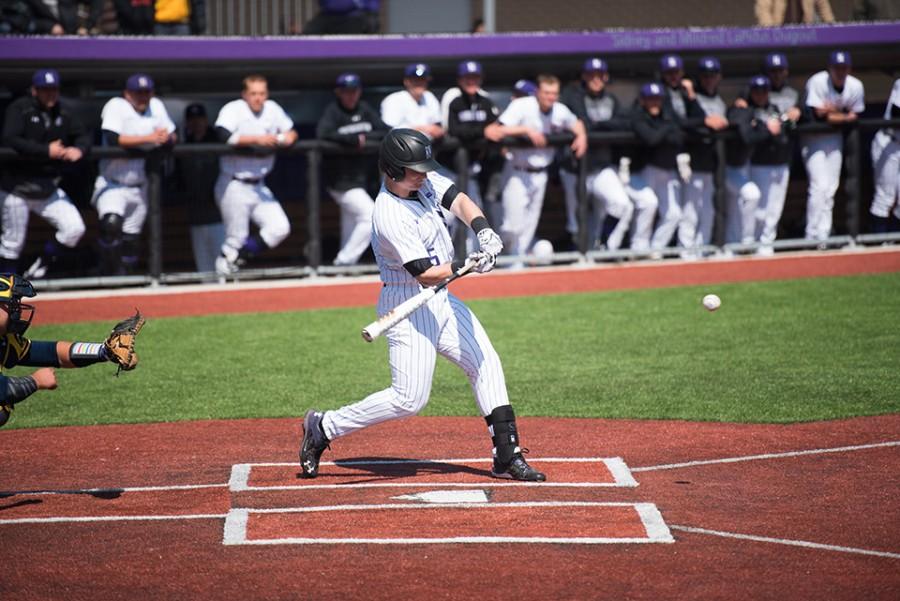 Connor Lind takes a healthy cut at the plate. The sophomore third baseman led the Cats in offense at Nebraska, notching nine hits.

A trip to Nebraska’s Haymarket Park, however, revived the sophomore’s season.

Lind went 9-for-14 at the plate in three games against the Cornhuskers (22-10, 7-2 Big Ten), helping Northwestern (8-24, 2-7) stay competitive in consecutive one-run losses Friday and Saturday before erupting for a dominant 11-3 win Sunday.

“On Wednesday, we went over some film and I just simplified everything,” Lind said. “I’ve just been seeing (the baseball) better and having a better approach — getting my foot down earlier. That really helped me and the rest of the team.”

The Wildcats exploded for 6 runs in the fourth and fifth innings Sunday to turn a 2-0 game into an 8-0 rout, with Lind scoring twice.

Having lost 20 of its last 23 contests entering the day, NU shocked Nebraska by lighting up starting pitcher Zack Engelken and a parade of relievers that followed him.

“They’re not feeling sorry for themselves,” coach Spencer Allen said. “They’re not looking at standings. They’re just going to play the game. I’m really, really optimistic that this can get us going in the right direction.”

The Cats put 2 runs on the board in the series’ first inning Friday — via RBIs by juniors Matt Hopfner (7-for-12 in the series) and Joe Hoscheit (6-for-14) — but were shut down for the remainder of the game, falling 3-2. Senior pitcher Reed Mason made his longest start of the season in the game, allowing 7 hits and striking out 6 in 6.1 innings pitched.

On Saturday, two Hoscheit home runs in the seventh and eighth innings helped NU rally from an 8-2 deficit and make it 8-7, but the visitors were unable to complete the comeback.

“We really battled both Friday and Saturday and obviously didn’t get wins, but they just kept fighting and … got rewarded for that,” Allen said.

Junior pitcher Joe Schindler — who was reinstated Wednesday after being suspended Feb. 28 — made his conference debut Saturday, facing three batters in the fourth but failing to record an out. He then pitched two innings to close Sunday’s game. Senior infielder Antonio Freschet, who was suspended around the same time as Schindler, remains suspended, Allen said.

Nebraska’s Ryan Boldt, the Big Ten leader in runs this season, added 3 more to his total in his team’s two wins but failed to cross home plate in the series finale. Meanwhile, the Cats made more and more contact with the ball as the weekend progressed, responding well from a stretch in which they had been shut out in 22 of their past 24 innings prior to Saturday.

Announced crowds of more than 5,000 attended each of the three games, creating a lively setting that Hopfner said actually helped NU.

“The atmosphere here is incredible and we were really energized by it,” Hopfner said. “We used it to our advantage and … tried to put up a fight in all three games.”

That certainly proved true at the plate, where Hopfner and Lind led an onslaught of batting success that equated to 28 hits in the Saturday and Sunday contests combined, and an impressive upset victory to conclude the series.