Women’s Golf: Wildcats look to get back on track in Arizona 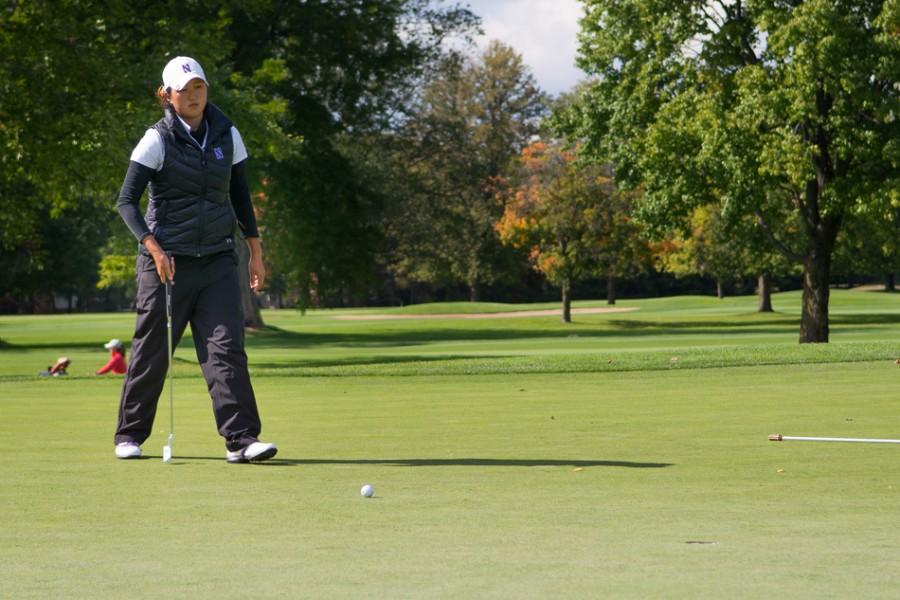 Sarah Cho approaches her ball on the putting green. The sophomore has averaged just under a 73 per round so far this season.

Northwestern is looking for a bounce back performance after a surprising sixth-place finish at the Liz Murphey Collegiate Classic in Georgia last weekend.

The No. 5 Wildcats travel to Tempe, Arizona, where every member of the team will be making her first appearance at the Ping ASU Invitational as the team takes on seven top-25 teams including No. 1 UCLA and No. 3 Alabama.

Because of the quick turnaround, NU will have only two opportunities to practice in the interim period before the start of the tournament on Friday.

“We were here a couple of weeks ago for spring break and played a round of golf at (Arizona State), so the girls are all familiar with the golf course,” coach Emily Fletcher said. “It’ll be good to get back out there and get a feel for the specific yardage we’re playing the holes at.”

Sophomore Hannah Kim, who dominated in the team’s trip to the Hurricane Invitational in Miami, struggled in Georgia, winning only one of her three match play contests.

Looking to come back strong in Arizona, Kim said she made the most of the team’s short practice window.

“I just worked on my shot to get my confidence back,” Kim said. “We’ve been practicing really hard up until this point. I just need to stay patient and trust what I’ve worked on.”

The two top-5 teams the Cats are facing may not even be the scariest teams in the field, as they also take on hosts No. 12 Arizona State and defending tournament champions No. 11 Arizona among the seven top-25 opponents.

Northwestern’s schedule this year has largely been limited to tournaments along the East Coast, and Fletcher said she anticipates the change in scenery will help the squad.

“Any time you can come west and play top teams from the West Coast, I think it’s beneficial,” Fletcher said. “It’s a great field. There’s a lot of good teams here, and it’ll be a good test for us.”

As part of the bounce back plan for NU, Fletcher is looking for the team to be more aggressive this weekend at Arizona State.

Although the results may not come immediately, the tournament is also NU’s final competition before the Big Ten Tournament in Indianapolis, so the team is looking at more than the final standings this weekend.

“Even more so than exactly where we finish, it’s more important to me that we compete and play to our capability,” Fletcher said. “It’s just more about us playing well and continuing to improve.”

For junior Kacie Komoto, that means working on her short game, which deserted her in Georgia as she dropped two of her three match play contests.

“The greens are a lot different than Georgia,” Komoto said. “They’re firmer, and they roll out more. It’ll be important for us to get a feel for the greens and to see the course again and get our strategy down.”

In addition to Kim and Komoto, freshman Stephanie Lau, sophomore Sarah Cho and senior Suchaya Tangkamolprasert will all compete for NU, while freshman Janet Mao competes as an individual.

Despite the team’s unfamiliarity with the tournament, Fletcher said she is confident it will benefit the Cats in the long run.

“It just felt like it fit well,” Fletcher said. “After not playing over spring break we have the opportunity to play twice before Big Tens. And it’s a great spot. I love coming to Arizona.”