Softball: Wildcats focused on fundamentals looking ahead to Iowa 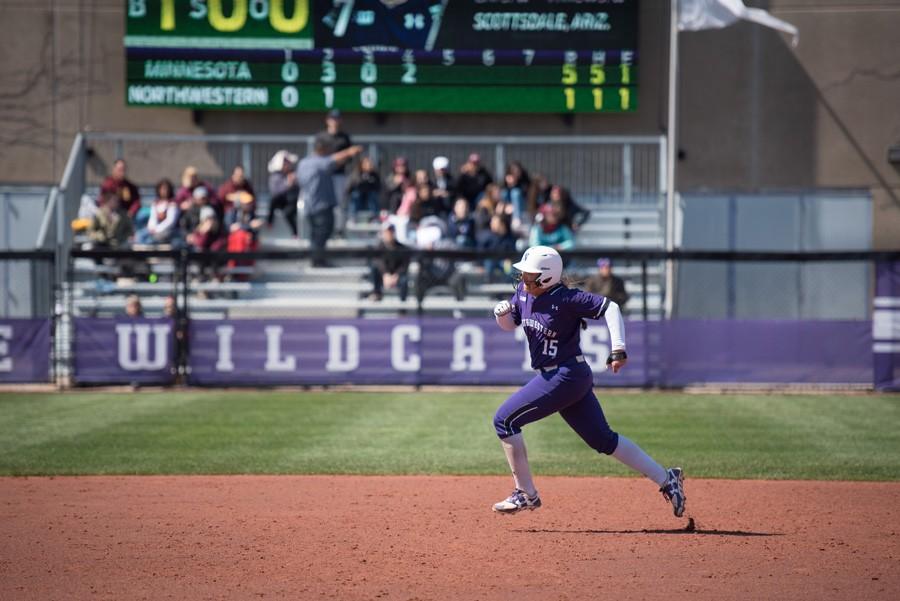 Sammy Nettling runs around the bases. The sophomore catcher is hitting .327 going into the weekend, good for second-best on the team.

After a big win to close out its series with then-No. 21 Minnesota, Northwestern is ready to run the table against its next Big Ten opponent.

This weekend, the Wildcats (11-20, 2-4 Big Ten) will face an Iowa (9-23, 1-7) team that has struggled at the outset of conference play. Although the Hawkeyes have a losing record, NU has no intention of underestimating its opponent.

Despite a series loss to the Golden Gophers last weekend, the Wildcats came off with a huge 10-2 third-game win. The team is looking to the victory as a reminder to stay composed both offensively and defensively. Sophomore second baseman Brooke Marquez said the team plays best when it finishes strong.

“For us, a big part of what we need to do is keep the momentum going from our win against Minnesota,” Marquez said. “We underestimate ourselves at times, and keeping our focus and momentum into this weekend will really show how good we are.”

To keep that energy going, NU will focus on fundamentals in practice this week as it prepares to take on a five-pitcher Hawkeye rotation, led by juniors Elizabeth Wiegand and Shayla Starkenburg.

Iowa also has six batters bringing in 10 or more RBIs, which will mean the Cats defense will have to take center stage this weekend to pick up wins. Freshman pitcher Kenzie Ellis emphasized the team’s defensive prowess, especially in how it supports NU’s pitching rotation.

“It’s just important for us to keep up with our plan, we like to throw strikes and let our defense do work,” Ellis said. “We have one of the best defenses in the country so it’s awesome to be able to put the ball in their hands and let them get outs for us.”

While the Cats’ defense prepares to take on the Hawkeyes, NU’s offense will be focused on getting key hits and RBIs to keep the team competitive during close games.

The Cats offense has been anchored as of late by senior rightfielder Fran Strub and freshman third baseman Morgan Nelson, who had 4 runs, 5 RBIs and 2 homers to close out the series against Minnesota. Coach Kate Drohan said the team’s batting lineup will have to fight every pitch this weekend in order to win every inning.

“Our key as we approach practice is all about fundamentals, breaking down skill sets and specific drills,” Drohan said. “But the rest of the week is go time, it’s all about making plays, I don’t care how they do it. We really have to think about playing in the moment.”

With three games against subpar Iowa on the horizon, the Cats said they have the ability to win big. Another weekend of Big Ten play will test the team’s grit, especially within a conference of tough and talented teams.

But Drohan’s philosophy toward the team’s intense strength of schedule and toward the game has always remained the same: NU has to take it one game — and one pitch — at a time.

“It’s all about competing … we’ve dug ourselves a little bit of a hole,” Drohan said. “As we look forward to Iowa, we just have to think about winning that first inning, we can’t afford to think about anything else.”