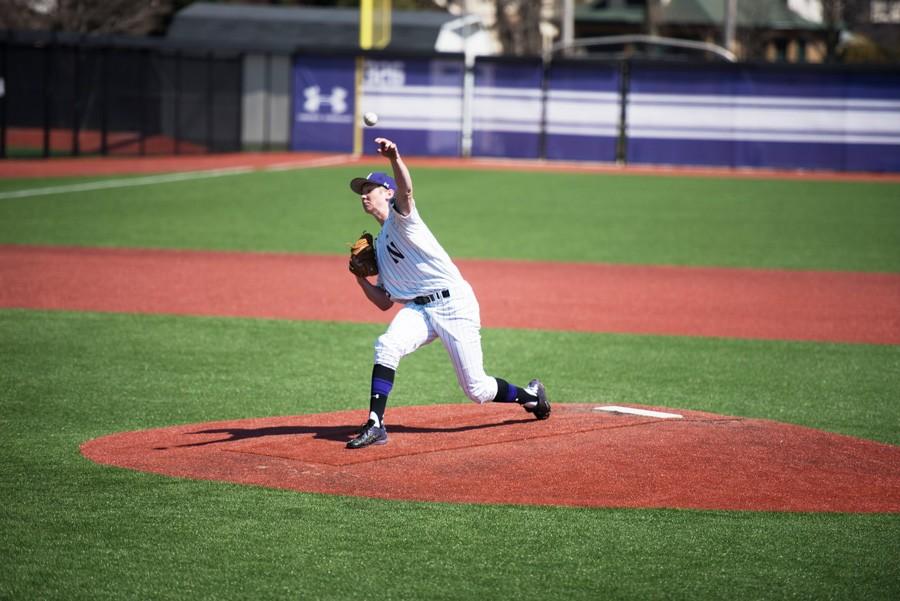 Matt Hopfner delivers a pitch. The junior not only starts on the bump for the Wildcats, but also leads the team in batting average.

Northwestern will find itself in a very familiar position this weekend — on the road.

After christening the brand new Miller Park with a five-game homestand, the Wildcats (7-22, 1-5 Big Ten) head out to Lincoln where they begin a series with Nebraska (20-9, 5-1) on Friday.

The Cornhuskers, who sit in third place in the Big Ten, will face an NU team that played its first 23 games away from home.

“Going on the road to Nebraska, they’ll have a great atmosphere,” coach Spencer Allen said after Tuesday’s contest against Illinois-Chicago. “They’ll be ready to play … and I think we have to focus more on us more than anything.”

During their stadium’s opening week, the Cats defeated Chicago State in the park’s first-ever game before getting swept by Michigan and shutout by the Flames. In those four losses, NU was outscored 40-16.

Now sitting in 12th place out of 13 Big Ten teams, the Cats say they are ready to buckle down and prepare for a tough Nebraska team. Senior infielder Zach Jones, who went 2-for-4 against UIC on Tuesday, said he isn’t scared by the Cornhuskers’ record.

“We just need everyone’s best focus and for everyone to just play with their best effort and ability,” Jones said. “I think if we do that, we can get some good things from this team. We’ve shown that in the past at times, so if we can get that from everybody I think it will go well for us.”

But Nebraska isn’t any ordinary opponent. Managed by former major leaguer Darin Erstad — who passed up an MLB managerial opening to stay in Lincoln — the Cornhuskers have lost only three games at home so far in 2016. An offensive juggernaut, they currently lead the Big Ten in runs scored.

Nebraska’s offense features outfielder Ryan Boldt, who is one of 50 Division I athletes nominated for the Golden Spikes Award, given to the best college baseball player in the country each year. The junior is tied for second in the Big Ten in runs and steals — Boldt’s teammate, infielder Jake Placzek, leads the conference in the former category — and was drafted out of high school in 2013. Come June, Boldt will likely be drafted again.

Additionally, Nebraska’s bullpen has been anchored this season by Big Ten ERA leader Reece Eddins. Appearing in relief 13 times so far this year, Eddins leads the conference with a miniscule 0.57 ERA.

Outside of Eddins, though, the pitching staff is the Cornhuskers’ weakest link. When subtracting Eddins’ contributions, Nebraska’s team ERA jumps more than a half-run from 4.54 to 5.09. Its offense is good enough to mask that deficiency, and Allen said NU knows it has to limit its frequent mistakes in order to keep the Cornhuskers from opening the floodgates.

“We just want to make sure that we play clean baseball and don’t beat ourselves,” Allen said. “That’s been the thing that, when you look at a series whether it’s Ohio State or Michigan, we’ve got (an) inning or two where we beat ourselves.”