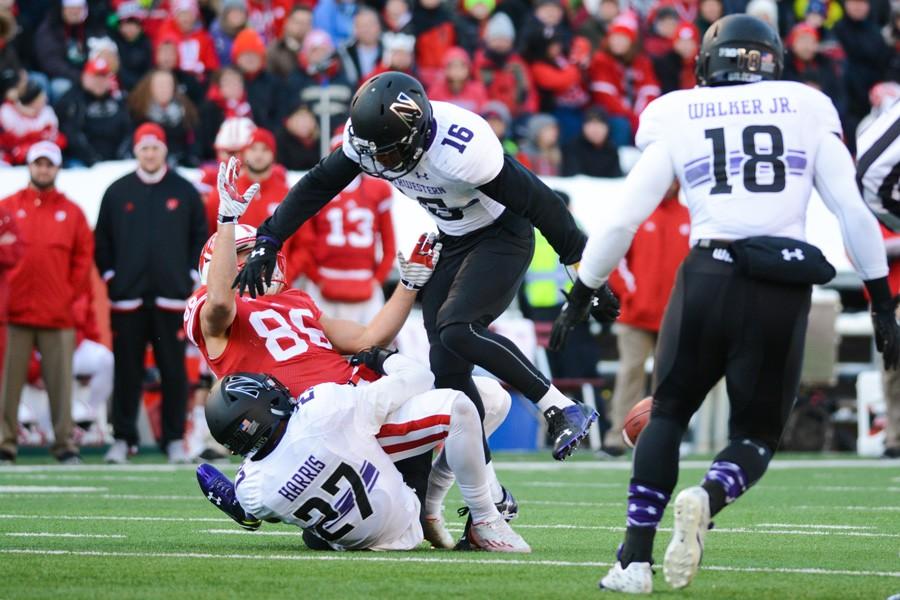 Matthew Harris and Godwin Igwebuike break up a pass. As the only returning starters in Northwestern's secondary, the two are expected to take on larger leadership roles next season.

For most position groups, losing two of four starters — especially when one played at an All-Big Ten level — is a huge problem.

That’s the situation Northwestern’s “Sky Team,” a self-proclaimed moniker for NU’s defensive backs emblematic of the group’s swagger, silliness and camaraderie, finds itself in ahead of the 2016 season. The Wildcats’ secondary must replace cornerback Nick VanHoose, an experienced shutdown defender, and safety Traveon Henry, the emotional leader of the defense.

This veteran play and vocal leadership isn’t easy to replace; losing those two traits jeopardizes the future of a defense which ranked second in the nation in 2015 in opposing yards per attempt allowed. But least concerned of all about the next generation of the Cats’ Sky Team is coach Pat Fitzgerald.

“I still think (the secondary is) one of our deepest groups,” Fitzgerald said. “You take an old guy like those two (VanHoose and Henry) and replace them with some younger, less experienced guys, but equally talented. They just have to get seasoned and they have to practice and that’s what they’re going through right now.”

Fitzgerald doubled down on that approach at the beginning of spring practice by moving backup cornerback junior Marcus McShepard, who appeared in every game last year, to the other side of the ball to play wide receiver. Maintaining the play of the secondary now falls to a core group of starters and a talented but unproven batch of younger backups.

True to the style of the Sky Team, senior cornerback Matthew Harris is hardly fazed. The seasoned veteran is entering his fourth year as a starter with little to worry about in terms of his play and also downplays the importance of his new role as de facto leader.

“I’ll do it where it fits in,” Harris said of leadership. “I don’t necessarily have to take a more vocal lead. It’s not about replacing VanHoose at all, it’s about making this team better.”

But being less outspoken doesn’t stop others on the team from looking up to his example. Juniors safety Kyle Queiro and cornerback Keith Watkins, both presumptive starters heading into next season, each named Harris as an important influence, and the play of the 2015 All-Big Ten third teamer will no doubt have a significant impact on how the unit as a whole performs.

Joining Harris as one of the most experienced players on the field is junior safety Godwin Igwebuike, who was pressed into replacement action his redshirt freshman season and debuted as a full-time starter last year.

Igwebuike always had a more veteran player next to him, whether that was Ibraheim Campbell in 2014 or Henry in 2015. Now the leadership role falls to him. A safety sees the entire defense in front of him, so it will be up to Igwebuike more than Harris to hold his teammates accountable for their mistakes.

“Definitely I need to step up, be more of a vocal leader,” Igwebuike said. “My boy Traveon left, so I have to step on the scene and be the commander out there, letting my (defensive backs) know where they have to be.”

Igwebuike and Harris are unquestionably talented, experienced players who shouldn’t have much trouble slotting into their new responsibilities on the team and seem more than comfortable taking on the added role of leadership. How Watkins and Queiro will replicate the play of VanHoose and Henry remains the larger question.

Watkins and Queiro had complementary stories to their 2015 seasons. Queiro started off the year strong, seeing regular playing time as NU’s nickel corner and recording an athletic interception to seal a surprising upset in the season opener against Stanford. A broken arm sustained against Ball State derailed his year.

Queiro said the time missed due to injury gave him a chance to reflect on his experience with football.

“That was actually the first time I’ve been injured in my whole life, I’ve never missed a game for anything,” he said. “I’m starting to realize, football, you can’t take it for granted. I’ve been playing my whole life, so it seems like a part of me, but at some point it will end. So just to maximize this opportunity and get as much out of it as I can is critical.”

As focused as ever, Queiro isn’t worried about an enhanced role on the team and pointed to his experience in big games in high school, as well as his tutelage under players like Campbell and Henry, as lessons which will help him adapt.

Watkins, meanwhile, saw his breakthrough at the end of the 2015 season because of an injury to VanHoose prior to the Outback Bowl. After starting in VanHoose’s place in the Cats’ 45-6 bowl game flop, Watkins is hungry for more in 2016 and thinks NU’s defense can improve in spite of graduating-senior losses.

“We have a lot of talent on defense. I think we can be a lot better,” he said. “The season didn’t end how we wanted it to last year so I think that’s going to help us for this upcoming season. We’ll be ready.”

Talent has no doubt been the biggest influence on the continued success of NU’s secondary, but the enduring attitude surrounding the Sky Team nickname — first conferred by Jordan Mabin, who graduated in 2011 — has certainly seemed to help.

Queiro said that he, Watkins and Igwebuike all live together, contributing to the unusually close bond that members of the Sky Team share with one another. Queiro added that he also sees the Sky Team attitude trickling down the roster to the unit’s freshmen, who embrace the “next man up” motto Fitzgerald loves to preach.

“Our freshman class is really good,” Queiro said. “Their talent is right there as we were when we were around that age. Maybe a little bit more cockiness is needed, but I think that their humility is a benefit as well.”

How the parts all come together — and whether the Sky Team can produce a repeat performance — will be determined on the field in 2016. NU’s secondary once again has the talent, leadership and depth to stand out as one of the nation’s best, but don’t be surprised if this season’s iteration has a slightly different flavor.

“That’s the great thing about college football,” Fitzgerald said. “Every year you’re going to have, and lose … really good players, and that next group of guys have got to step up and play their game and do their thing and not try to be the previous guy.”