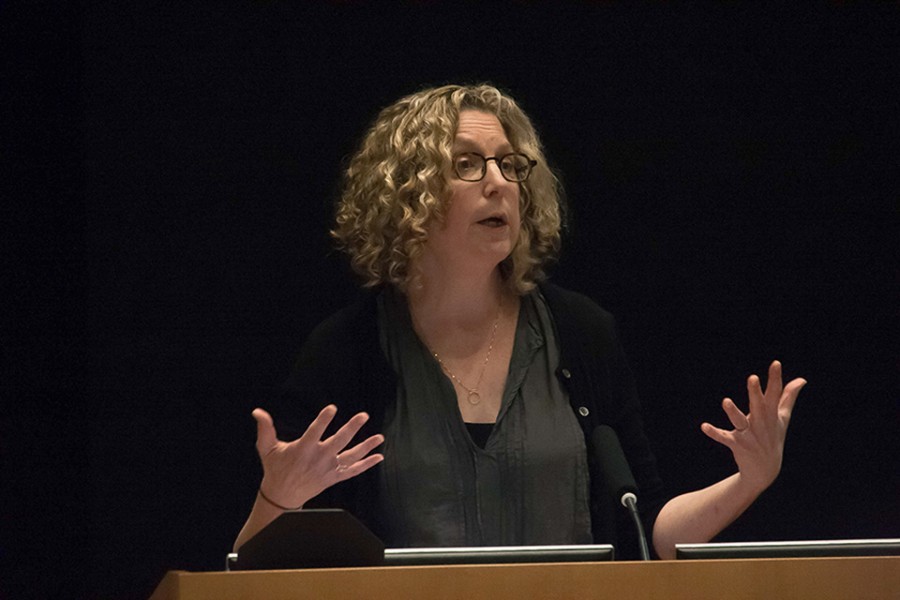 For her latest book, “Girls & Sex: Navigating the Complicated New Landscape,” Orenstein interviewed more than 70 young women throughout the United States, ranging from ages 15 to 20, to ask them about their sexual experiences.

From her interviews, Orenstein said some young women seem to believe that “when you’re talking about girls and sex, the opposite is two negatives: you’re a slut or you’re a prude.”

“(The interview) was pretty relaxed,” Shapiro said. “(Orenstein) had a series of questions that she asked everybody. It wasn’t as nerve-wracking as you would think an interview about your sex life would be.”

The book’s topics include ideas about college hookup culture, girls’ self-esteem in relation to their appearance and the lack of conversation about women’s sexual identities, Orenstein said.

Many of the questions Orenstein asked related to her personal sexual experiences and the various ways she learned about sex growing up, Shapiro said.

One of the ideas Orenstein wanted to challenge in the book was the narrow definition of virginity as first intercourse, especially for lesbian and bisexual girls, who may have sexual partners without engaging in intercourse, she said. She wanted to analyze how “putting that one act in a separate category was keeping them safer from disease, from coercion, from betrayal, from assault,” she said.

“It’s a very taboo topic that no one talks about, but I think it’s a very real issue,” Bao said.

Through her work, Orenstein said she hoped sexual relationships will one day be an issue that can be openly discussed.

One way sexual relationships are currently discussed is the use of the common baseball reference, in which boys reach certain bases during a sexual encounter, Orenstein said.

“In baseball, there’s winners and losers,” she said to the audience. “So who’s supposed to be the loser when you have sex?”