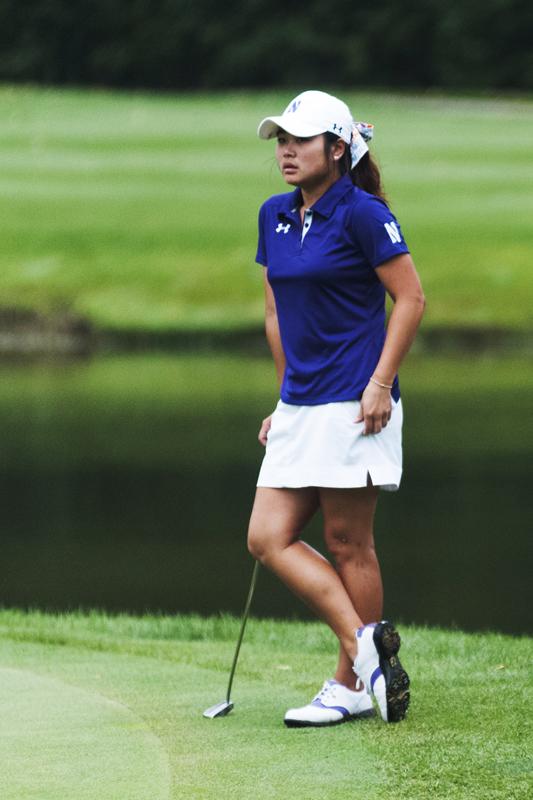 A Northwestern golfer stands on the edge of the green, eyeing her next shot. The Wildcats competed against many top opponents at the Liz Murphey Collegiate Classic this weekend.

Battling six of the top seven teams in the country last weekend, No. 4 Northwestern disappointed with a sixth-place finish at the Liz Murphey Collegiate Classic.

The Wildcats opened the tournament with a strong round of stroke play on Friday, shooting six-over-par as a team to finish fifth in the stroke play competition.

NU was led by junior Kacie Komoto’s one-under round, which set up a showdown with No. 2 USC in the first round of match play.

“We had some unforced errors and didn’t play really that sharp,” coach Emily Fletcher said. “We played decent enough. For a first round back after a month not competing it was pretty respectable.”

The Cats, however, failed to translate that performance into a win on Saturday, dropping the match play round to USC 4 to 1.

“I like to play match play because I think I’m good at judging the situation,” Tangkamolprasert said. “If the other person hits it in the hazard, I know when to play safe and when to be aggressive. I think that’s really valuable in match play.”

Tangkamolprasert won her second match of the tournament in the Cats’ second match on Saturday against Kent State, which they won 4.5 to 0.5.

“Kent State’s a good team, so it’s great to go out and win four and a half points against them,” Fletcher said. “We jumped on them early and took advantage of them having a little bit of a hangover from the morning round.”

With the win, NU took on Big Ten rival Purdue in the fifth-place match, but lost in a tiebreaker to finish in sixth.

Against the Boilermakers, Tangkamolprasert capped off a spectacular tournament with her third victory, while Kim took home her first win of the tournament.

“I kind of struggled with just focusing on myself,” Kim said. “Today I think I came back and started focusing on myself again and I played a lot better. Just knowing what I wanted to do, I think that really helped me.”

Even though they took sixth overall, the Cats finished better than multiple top seven foes, including No. 1 Duke and No. 7 Arkansas, both of which failed to even make it to the match play round of the tournament.

Despite coming off over a month without playing a competitive tournament, Kim made no excuses for the team’s performance.

“We’ve all been practicing in the meantime,” Kim said. “We came into this tournament well-prepared, and I think this is just the opening tournament for our spring season so I don’t think we should get too discouraged with what happened this week.”

NU will need that bounce-back attitude as their next tournament begins Friday in Arizona.

In that interim period, Fletcher will be looking for some serious improvements as the Cats make their run toward the Big Ten and NCAA championships.

“Overall we just need to play better,” Fletcher said. “We didn’t play great this weekend. We didn’t putt very well, and so we’ve gotta get home and regroup and get some practice in these next couple of days.”