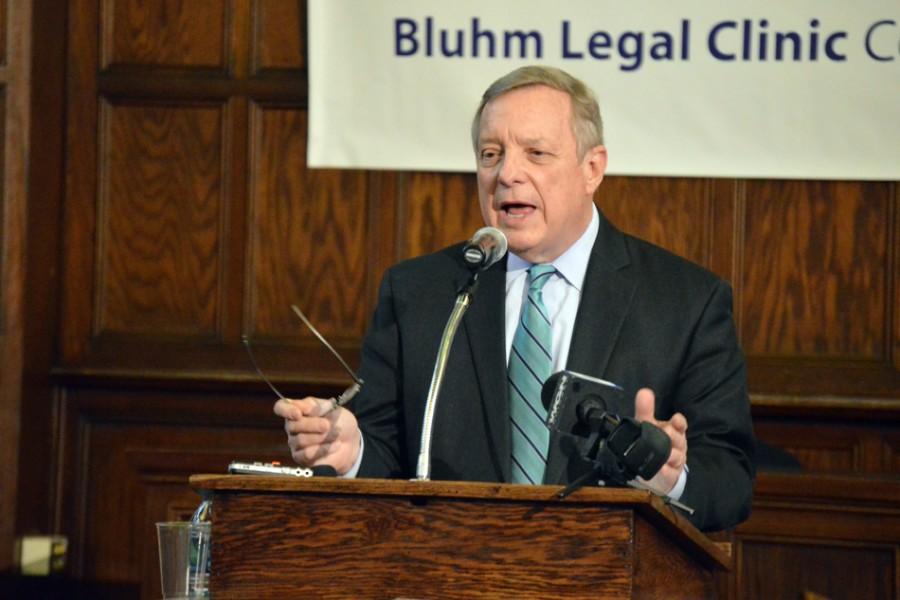 The bill’s approach to improving mental health at colleges is threefold: It creates a grant system for mental health treatment services on college campuses where they are now underfunded, launches an educational campaign aimed at reducing the stigma around mental health and establishes a task force to unite multiple federal agencies to work together on the issue.

Durbin was accompanied by Sen. Susan Collins (R-Maine) and Sen. Michael Bennet (D-Colo.) in bringing the Mental Health on Campus Improvement Act to Senate. This introduction followed the bill’s reintroduction to the House of Representatives by Rep. Jan Schakowsky (D-Evanston) earlier in January. Both this act and another bill introduced by Durbin on opioid prescription were included in the Mental Health Reform Act of 2016 introduced in mid-March.

“Presently, stigma and the lack of education and peer support means too few students are seeking mental health services,” Durbin said in a news release. “The (act) will change that by making federal help available for campuses to expand their mental health awareness, outreach, screening, and direct support services.”

On Northwestern’s campus, Counseling and Psychological Services is better funded than many college mental health services, but there is always room to become more accessible and improve services, executive director John Dunkle said. Currently, CAPS is in the process of filling three new positions this year, and it has received donations to put on programming such as an Essential NU — a required event for all new students during Wildcat Welcome — on mental health and a suicide prevention campaign.

“We’ll certainly look into what the final version is and see if we could maybe apply for a grant for research,” Dunkle said. “We’re always thinking about ways to reach students and reduce stigma. We don’t know what the bill will necessarily look like in its final form, but this could be another way to do just that.”

Dunkle also serves on the Association for University and College Counseling Center Directors, which had one of its surveys referenced in the bill. The bill cited the association’s research finding that 44 percent of students visiting campus counseling centers were dealing with severe mental illness in 2014 compared to 16 percent in 2000. The legislation would seek to address the disparity between the growing need for services on college campuses and the lack of increase in mental health resources at many schools, Dunkle said.

Schakowsky introduced a similar piece of legislation to the House in 2009, which ultimately was not enacted. The bill was reintroduced in 2011 and 2013 before its most recent reintroduction to the House in January 2016. In a press release, Schakowsky reiterated the need to keep pushing for the increased funding for college mental health services the act would provide.

“Campuses should be ground zero in our efforts to combat mental health issues, including suicides and episodes of gun violence, yet many colleges and universities are not equipped to provide mental health awareness, screening and services,” Schakowsky said in the release. “Our country is facing an urgent mental health crisis that demands real solutions.”

The Senate bill was referred to the Committee on Health, Education, Labor and Pensions after introduction.

“In times when budgets are really limited and sometimes being reduced, you hear a lot about directors needing to find creative ways to fund their services,” Dunkle said. “This would be another way to get more services for more students nationwide that need it.”