Lacrosse: No. 8 Northwestern falls to No.1 Maryland in repeat of NCAA Tournament loss 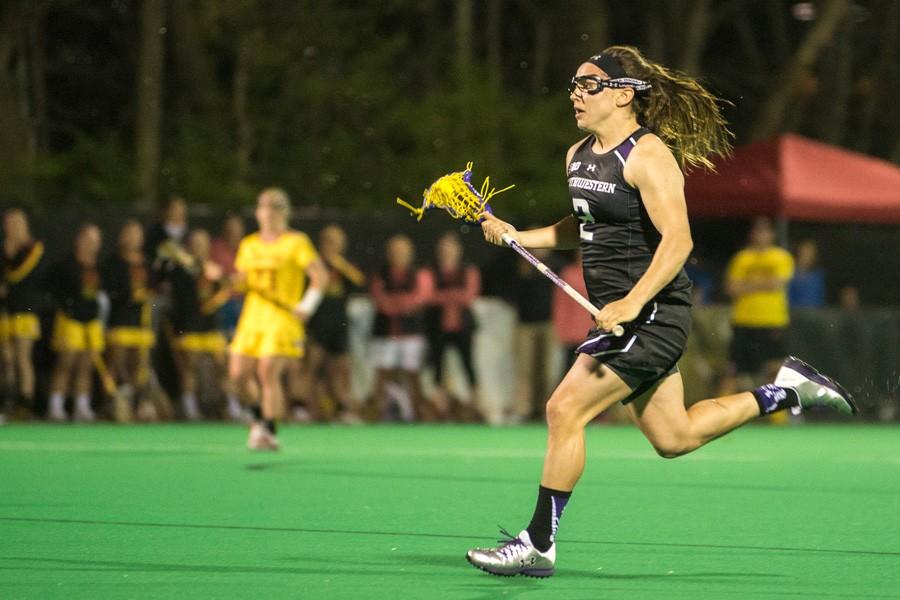 Selena Lasota runs down the field with the ball against Maryland. The sophomore midfielder was held scoreless Thursday night despite firing 5 shots.

And while the drive for redemption might have been there for the Cats on Thursday night, their offensive struggle mirrored last year’s game.

“I just think that our offense didn’t take advantage of the opportunities, it was almost like a rerun of last year’s playoff game,” coach Kelly Amonte Hiller said. “When our defense is making big stops and we can’t produce anything, it’s hard to compete. They took advantage of their opportunities. We didn’t.”

The Terrapins outshot the Cats 35-22 in the matchup, converting on almost half of those shots. NU in comparison, was unable to capitalize on its shots, partially because the team found itself on the wrong side of luck. While in a 4-0 hole early into the first half, the Cats had three shots bounce off the goal’s pipes.

Despite the early 4-goal deficit, NU was able to match the Maryland’s pace of play after about 10 minutes, and asserted itself as a competitor by playing gritty — chasing balls, being physical and attacking with speed. By halftime, the Cats had cut the Terrapins’ lead to 5-2.

But with 2 goals in the first two-and-a-half minutes of the second period, Maryland set the tone for the rest of the game.

Defensively, NU was unable to stop Maryland midfielder Taylor Cummings, who is a 2-time recipient of the coveted Tewaaraton award. Cummings led the Terrapins with 5 goals Thursday night.

The Cats were similarly unable to stifle the finesse of Maryland attacker Megan Whittle who dominated the 12-meter arc, scoring on all four of the shots she took.
In contrast, NU’s best offensive players were shut down. Senior midfielder Kaleigh Craig, who leads the Cats in goals, contributed just 1 in Thursday’s loss. Sophomore midfielder Selena Lasota, who was the 2015 Big Ten Freshman of the Year, didn’t record an assist or a goal.

Amonte Hiller said this discrepancy between Maryland’s top players and NU’s stars contributed to the loss in ways that went beyond the stats book.

“I don’t think (Craig and Lasota) played well,” Amonte Hiller said. “A lot of that is their defense did a great job on them, but in order for us to be good in a game we have to have our best players step up. Their best players: 5 and 4 goals. Our players were held. And that’s really the difference. Your team feeds off that, your team gets momentum, and we just didn’t get any momentum.”

The Cats found yet another foe in the smooth and bouncy surface of the field they played on, contributing to their 14 turnovers. Though Amonte Hiller said the Cats practiced on NU’s field hockey field all week — a surface nearly identical to Maryland’s field — the carpet-like field still seemed to give the Cats trouble on ground balls. NU snagged seven ground balls, while Maryland scooped up a hefty 21.

Maryland also forced several turnovers off the draw. Though draw controls were pretty even, NU committed a handful of fouls directly after the draw that awarded the ball to Maryland, facilitating a series of fast break and transition goals.

But for Amonte Hiller, the bottom line was that NU got outplayed.

“There’s a fine line between being good and being great and they were great today,” Amonte Hiller said. “It’s a great opportunity to play against the best and get your measuring stick, and obviously we have a lot of work to do.”