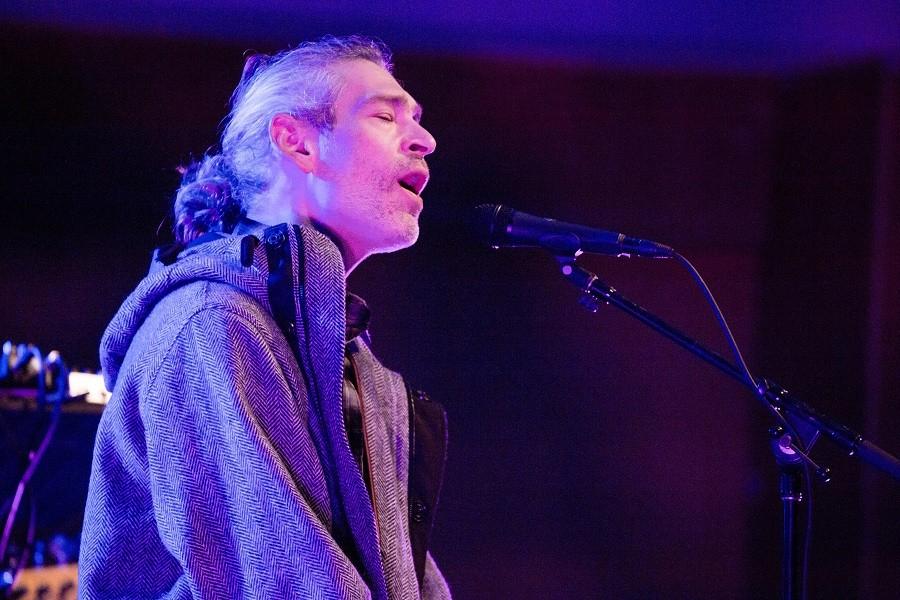 Matisyahu performs at Pick-Staiger Concert Hall. The Jewish musician and rapper also discussed his faith during the performance Thursday.

Instead of the usual classical or jazz music, Pick-Staiger Concert Hall was filled with a psychedelic light show, thumping bass and the reggae, hip-hop and rock sounds of Grammy-nominated musician Matisyahu.

Matisyahu took the stage Thursday sporting a man bun, trendy black joggers and high-top sneakers. It was a different look than the one that made him famous as a Hasidic reggae artist who wore traditional orthodox attire and sported a beard. That changed in 2011, when he shaved his beard and renounced his Hasidic faith.

“I started opening up to the idea of other possibilities, other ways of living and thinking,” he said to the mostly full 989-seat concert hall. “At some point I went from this way of black and white thinking and being just two things to being a mishmosh of a lot of different things.”

In addition to his appearance, the transformation resulted in an inner change from being “just a Hasidic guy doing reggae,” which is reflected in his music, the musician said.

Sam Feldstein, a Weinberg freshman, was one of many shocked fans when Matisyahu went through his personal transition a few years ago.

“I listened to Matisyahu back when he was Hasidic,” said Feldstein, who attended the concert. “I remember when he first shaved his beard. It was the biggest thing. Everyone was talking about it all over Facebook.”

Despite the change, his music still integrates elements of his faith, such as themes from Orthodox Judaism, lyrics paraphrased from the Bible and Yiddish lyrics. Some of his songs even include sound bites from various rabbis.

“He has a very unique perspective on American Judaism today having experienced it in a number of different places because he’s a celebrity and he’s achieved the crossover success that no other ultra-orthodox Hasidic Jew has achieved,” religious studies Prof. Barry Wimpfheimer told The Daily.

Wimpfheimer, who teaches multiple courses on Judaism, interviewed the musician before the performance as part of a series hosted by the Crown Family Center for Jewish and Israel Studies.

Matisyahu’s newest album “Akeda” — the Hebrew word for binding, which is a biblical reference to Abraham binding his son Isaac for sacrifice — features some autobiographical songs about his journey, Wimpfheimer said.

“He’s going through something personally, and he’s playing that out in his music as artists do,” he told The Daily.

The artist spoke specifically about “Confidence,” one of the songs on his album, in which he tells his younger self to be more comfortable with being different.

Matisyahu took his own advice: He ended the concert by dancing off the stage while his band jammed out to an instrumental piece accompanied by multi-colored strobe lights.

“I’m a different kind of creature than most and I didn’t believe that for a long time,” he said. “I came to understand that to be happy I need to be doing my own thing in a way that makes sense to me.”