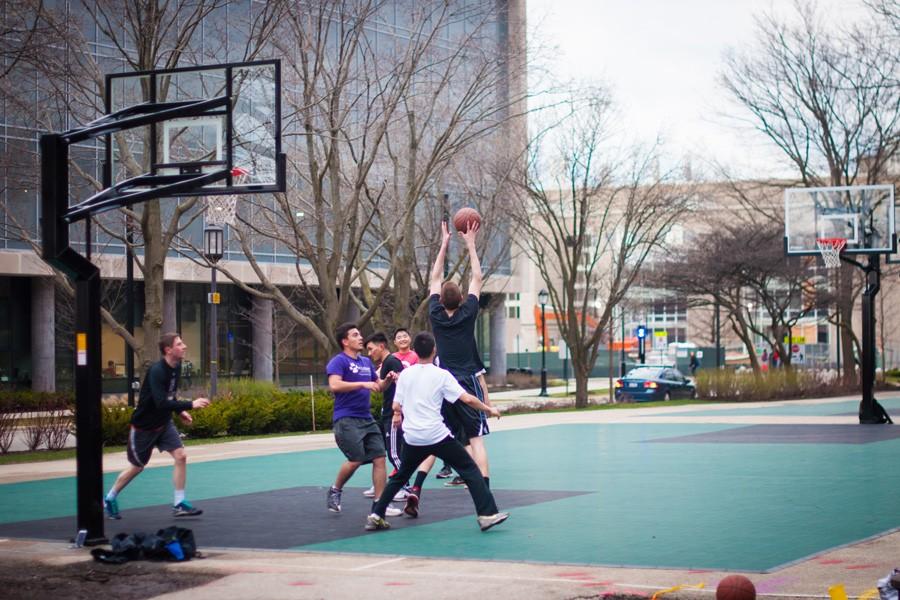 Students play basketball outside Bobb Hall, where the courts were recently updated. The courts outside McCulloch Hall and Foster-Walker Complex were also given an upgrade.

New basketball courts have been installed outside Foster-Walker Complex and Bobb-McCulloch Hall, following the closure of the courts at Henry Crown Sports Pavilion for two years due to construction.

Paul Riel, executive director of Residential Services, said the renovations were suggested in a meeting among administrators Winter Quarter, and the project was completed over Spring Break. The idea for the resurfacing came from University President Morton Schapiro during the meeting, in which he requested the courts be revamped in time for this Spring Quarter.

“He mentioned the outdoor basketball courts, felt like they were in bad repair and that we should do something about getting them turned around before students came back,” Riel said.

The new court surfaces, which are made of plastic, are safer and easier to maintain, Riel said. With lines and markings embedded on the tiles, they will not fade or need to be repainted, he said.

And because the new courts comprise connected tiles, damage can be repaired by replacing a single piece, said Gary Wojtowicz, senior director of Facilities Management.

“This is a tested and proven sports surface that is safe and durable for all seasons,” Wojtowicz said.

The new courts also enhance the residential experience, Riel said. Compared to the previous courts — asphalt worn down by years of pick-up basketball — the upgraded courts are in better condition for students to play.

“It expands recreational opportunities for students, and that’s always a good thing,” Riel said. “Anything you can do that adds to your quality of life related to exercise and getting outside and enjoying sport is healthy and contributes to a well-balanced student.”

In addition to the completed renovation, Facilities Management is working on landscaping in the area immediately surrounding the courts, Riel said.

Alex Dale, a Weinberg freshman, said he was not expecting the court renovations. He said he typically plays basketball twice a week at Blomquist Recreation Center but anticipates more outdoor games as the weather improves.

“It’ll be nice with spring weather to play outside,” Dale said. “It’s going to be a change of pace.”