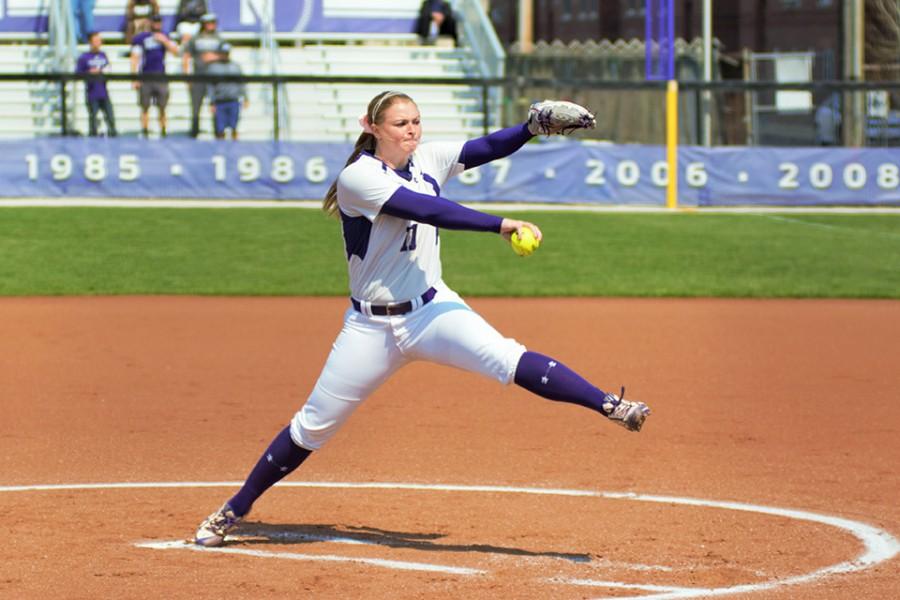 Kristen Wood winds up and delivers. The senior pitcher struck out six batters in her last start against Georgia Tech.

The Wildcats defeated No. 2 Michigan in a wild 13-12 victory Friday, earning a signature win against one of their toughest competitors in conference play and highlighting their last two weeks of Spring Break play.

Northwestern (10-18) began the break in Florida at the USF Clearwater Spring Break Tournament, where the Cats faced five teams over three days of play. After the tournament, the Cats stayed to take on South Florida before heading to Michigan for a weekend series. Despite the Cats’ win-loss record, the team’s toughness was on display throughout all nine games played during the break, with the Michigan win a possible sign of things to come.

On March 18, NU started out with a huge win over Quinnipiac, which the Cats run-ruled 10-0 after five innings. Their second game of the day featured a tough LIU Brooklyn defense that thwarted the Cats’ attempts at offense. Heading into the fourth inning with a 5-1 lead, the Blackbirds were able to come away with a 7-3 win.

The next four games were close: After beating Lehigh 2-0 on Saturday morning, the Cats dropped three straight to Kent State, Georgia Tech and South Florida, all by scores of 3-2.

NU then headed to Ann Arbor, Michigan, commencing Big Ten play against perennial powerhouse Michigan in a weekend series. After falling behind by 6 runs before the fourth inning of Friday’s match, the Cats went on to score 13 runs over the next three innings to complete their surprising comeback 13-12.

Freshman pitcher Kenzie Ellis led NU on the mound, throwing 142 pitches over 5.2 innings and allowing no runs in the fifth and sixth innings. The Cats’ bats also came alive against the Wolverines, with freshman third baseman Morgan Nelson bringing in 4 RBIs and sophomore centerfielder Sabrina Rabin going 3-for-5 with 2 runs and an RBI.

With strong momentum after the huge win, the Cats then faced Michigan twice more before the weekend was up. Saturday’s game started out with a bang, with senior shortstop Andrea Filler hitting a homer to left field and bringing home sophomore left fielder Krista Williams.

NU’s lead soon evaporated, with the Wolverines scoring 5 runs to end the first inning. A dinger to center field by junior first baseman Alcy Bush brought the game within 2 runs, but Michigan scored 6 more, run-ruling the Cats 11-3 after five innings.

The Cats faced the same fate Sunday, dropping the last game of the series to the Wolverines by a score of 11-3 after six innings. Michigan started off hot with a 5-0 lead after two frames, but NU fought back, scoring 2 on a Wolverine error. Another Bush homer brought the score to 6-3 in the fourth, but Michigan followed suit, scoring 5 more runs to end the game in six frames.

With the Michigan series a reminder of the Cats’ ability to win big, NU will look to challenge No. 22 Minnesota, another Big Ten powerhouse, in this weekend’s series in Evanston.