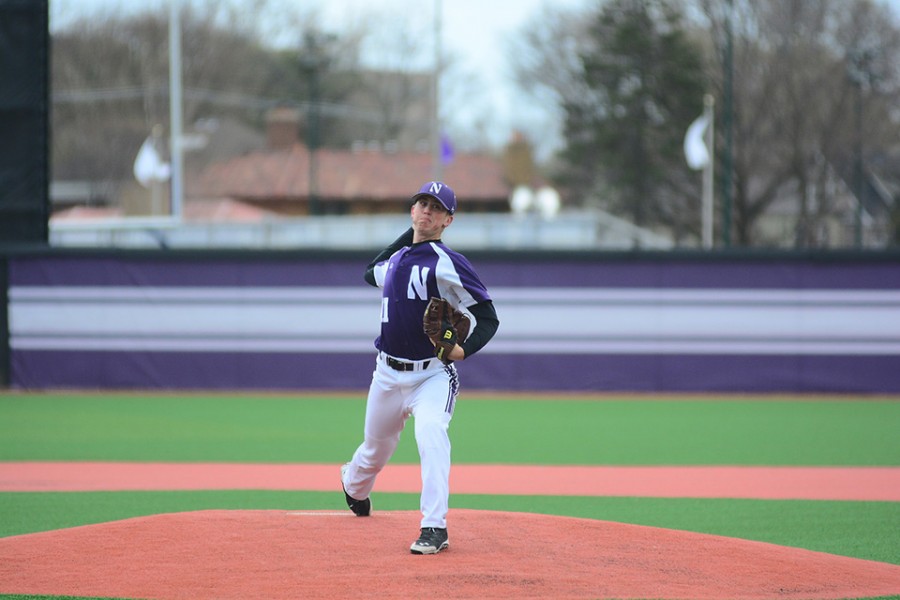 Pete Hofman delivers a pitch. The junior reliever pitched the Wildcats out of a jam in the 8th Sunday, but surrendered the eventual walk-off home run an inning later.

RJ Watters had just saved the Wildcats — for a moment.

The junior left fielder left his feet at the warning track, preventing what would have been a leadoff extra-base hit in the bottom of the 9th as Ohio State threatened to steal a series win from Northwestern (6-18, 1-2 Big Ten). Ohio State (14-7-1, 2-1) had split the first two games with the Cats and trailed 4-3 when Watters made his leaping catch.

“It’s funny, that kid plunked one down the line earlier in the game in foul territory where I dove and I just missed it,” Watters said. “So coach shifted me over a little bit … and (the batter) was able to put his hands out and get one up, and immediately in my mind I was thinking, ‘I don’t care if I’m running into this wall, I’ve got to get this ball.”

Unfortunately, it was all for naught.

Three batters later, after junior reliever Pete Hofman recorded the second out and walked center fielder Troy Montgomery, right fielder Jacob Bosiokovic yanked a fastball over the left field fence to give the Buckeyes a 5-4 win in Sunday’s rubber game.

Bosiokovic’s walk-off heroics embody NU’s struggles over the past two weeks. Since starting the season 4-4, the Cats have lost 14 of their last 16 games, and their six overall wins are second fewest in the Big Ten.

Coach Spencer Allen attributed his team’s performance to inconsistencies in all three facets of the game: offense, defense and pitching. Allen specifically pointed to last week’s sweep at the hands of Cincinnati as a “snapshot” of NU’s woes.

“When you’re inconsistent it’s going to be hard to string games together,” Allen said. “We lost four 1-run games (since the beginning of the Cincinnati series) and good teams find a way to go 2-2 in those 1-run games, at least, and we just haven’t done that.”

Despite Sunday’s heartbreak, the Cats played some of their best baseball against the Buckeyes to open up the Big Ten portion of the schedule. All three games were decided by three runs or less — Friday and Sunday were both 1-run contests — and some semblance of a pitching rotation took shape, something that wasn’t entirely possible before the weekend.

For example, sophomore pitcher and football player Dan Kubiuk started against the Buckeyes on Sunday and threw the ball well. Kubiuk lasted 5.2 innings, surrendering only four hits, although two were solo home runs.

Now lined up to be NU’s Sunday starter, Kubiuk said he was pleased with his outing, and the team’s performance, even though the Cats ultimately lost.

“Our pitching coach, coach (Josh) Reynolds just told me ‘Be aggressive and just do your thing,’” Kubiuk said. “We just had an unfortunate outcome at the end, we all thought the game was ours … but we tip our cap to them.”

After what seemed like an eternity, NU will finally head home to christen its newly-renovated stadium, Rocky and Berenice Miller Park. The Cats’ face Chicago State in their home opener Wednesday afternoon.

“The Big Ten season is what’s important for us,” Watters said. “To come out and play this well this weekend and not get that win, yeah it’s going to sting, but at the end of the day we’ve got to look at the positives and know that we competed hard.”

Correction: A previous version of this story incorrectly stated that Dan Kubiuk was no longer on the football team. He is still on the team. The Daily regrets the error.