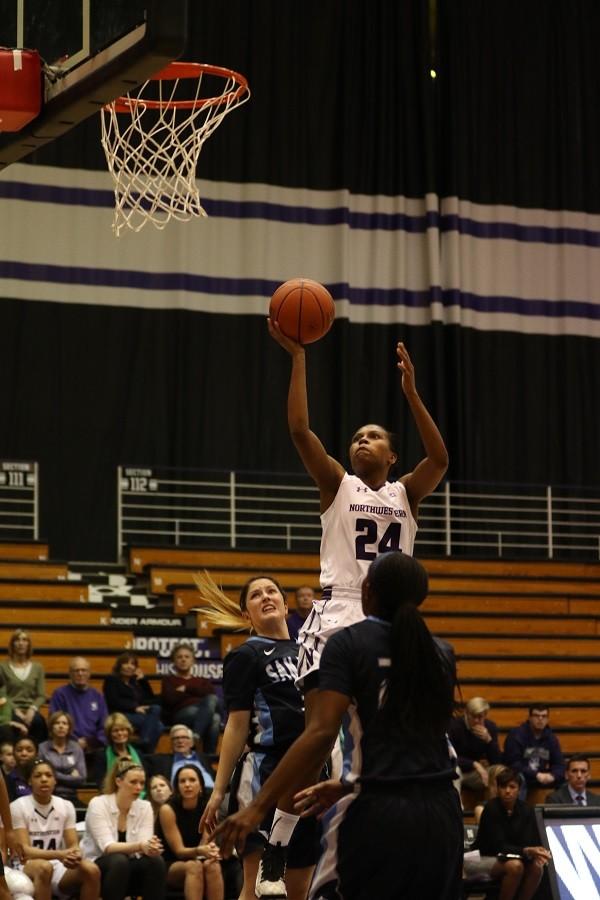 Christen Inman attempts a layup. The junior guard struggled mightily for the Wildcats on Thursday, shooting just 3-of-14 from the field.

Nearly two weeks after Northwestern’s dramatic Big Ten tournament run ended at the hands of Maryland, the Wildcats’ offense started too slowly for a fourth quarter run to win them the game.

“We just had so many great shots, some layups at the rim just didn’t go in,” coach Joe McKeown said. “I would trust those players taking the same shots.”

The team has struggled to find consistent scoring from anyone outside of their big four of juniors Christen Inman, Ashley Deary and Nia Coffey and senior Maggie Lyon and Lyon’s continued absence with a foot injury put more pressure on the other three. Deary, Coffey and Inman combined for 49 of NU’s 65 points.

However, Inman had an off-game offensively shooting just 3-of-14 for 6 points after she scored the same number in the game against Maryland. As a result, Coffey and Deary were forced to shoulder the load with 20 and 23 points, respectively

The difference for much of Thursday’s game was the 3-point shooting as NU shot just 1-of-7 from deep through three quarters while the Toreros made 7-of-12. Because NU was unable to force San Diego to guard them on the 3-point line — the Toreros were in a 2-3 zone — San Diego kept their players close to the net and prevented the Cats from making easy baskets.

Through the first three quarters, the Cats only scored 30 points which put them down by 18.

Ultimately, fourth quarter 3s from sophomore Lydia Rohde and freshman Jordan Hankins were able to open up the Toreros’ zone at the beginning of NU’s fourth quarter run, but it was too late for the Cats to extend their season. The Cats finished the fourth quarter with 35 points.

“(Not making three pointers) gave San Diego a chance to really make it congested when we tried to attack,” McKeown said.