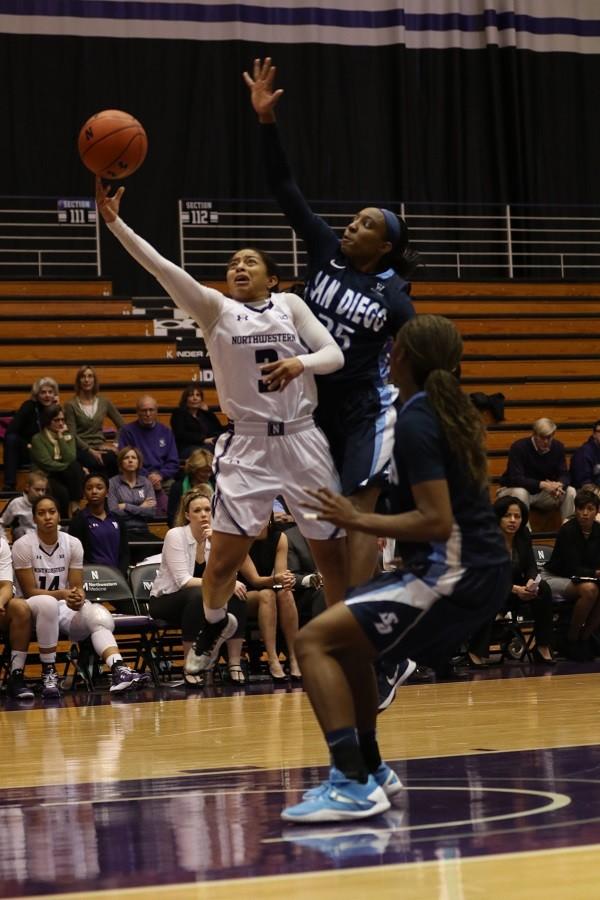 Ashley Deary goes up to the basket. The junior guard led all scorers with 23 points in Northwestern's loss to San Diego on Thursday.

If you’re going to lose in March, might as well do it at home.

Northwestern (18-17, 4-14 Big Ten) limped to the finish line of a disappointing season as it was eliminated in the opening round of the WNIT by San Diego (24-7, 13-5 West Coast), 69-65, at Welsh-Ryan Arena on Thursday night. In the team’s fifth-consecutive game without senior guard Maggie Lyon, the Wildcats were unable to find any offensive production in a contest San Diego controlled from start to finish.

It was a sloppy opening frame for the Cats as they had six turnovers in the game’s first 10 minutes. The visitors capitalized off these mistakes to the tune of 8 points off turnovers in the first quarter. To make matters worse, NU failed to control San Diego’s penetration and allowed 12 points in the paint.

“The biggest thing was we couldn’t make shots, we couldn’t get out in transition, because they were scoring,” coach Joe McKeown said. “And we just couldn’t get to the rim. We played a lot of east-west instead of north-south. (It) forced us out of our offense.”

The Cats shot just 4-of-15 in the first quarter, and although they had 8 points inside, that was all of their scoring for the period.

Down 18-8, NU’s defense amped up the pressure in the second, but to little avail.

With less than 3 and a half minutes remaining before halftime, the Cats trailed by just 9. After the team corralled a rebound, junior forward Nia Coffey sprinted past the pack upcourt and found herself at the rim with a chance to supply NU with a rare fastbreak bucket. But Coffey’s shot never found the bottom of the net, rolling on top of the rim before spilling over the right side of the hoop where San Diego collected the board, helping to create its 24-17 edge in the first half on the glass.

Despite forcing seven Torero turnovers in the quarter and holding their opponent to 4-of-14 shooting, the Cats could not make a dent in the lead. Thanks to a myriad of their own errors, the hosts trimmed their deficit by just 1, and trailed San Diego by 9 heading into the break.

Whether it was missed layups, inadequate rebounding or errant passes, NU found plenty of ways to dig its grave even deeper.

In the second half, the Toreros continued to do just enough to keep the Cats off guard, and were able to immediately extend their lead. After going 5-of-9 on 3-pointers in the first half while NU made just one, San Diego found more success from behind the arc to start the third quarter. A pair of 3-pointers from guard Cori Woodward had the Toreros holding a 17-point lead less than 2 minutes into the half, 40-23.

San Diego’s lead grew to as large as 21 early in the fourth quarter as the Cats failed to put the ball in the bucket while showing little ability to control the opposition’s offense. A 13-0 run would bring NU to within 8, and the margin would eventually dwindle down to 2 in the final seconds, but the Cats couldn’t complete the comeback.

“We just missed a lot of shots around the basket that we normally make,” McKeown said.

Outside of 20 points and 11 rebounds from Coffey and 23 points from junior guard Ashley Deary, there was not much for the Cats to hang their hat on stats-wise. A 3-of-14 shooting night from junior guard Christen Inman, tagged with a 6-of-17 performance from Coffey set the tone for a 25-of-64 outing for the team.

With NU eliminated from postseason play, the team will have to look forward to next season, when Coffey, Deary and Inman are seniors.