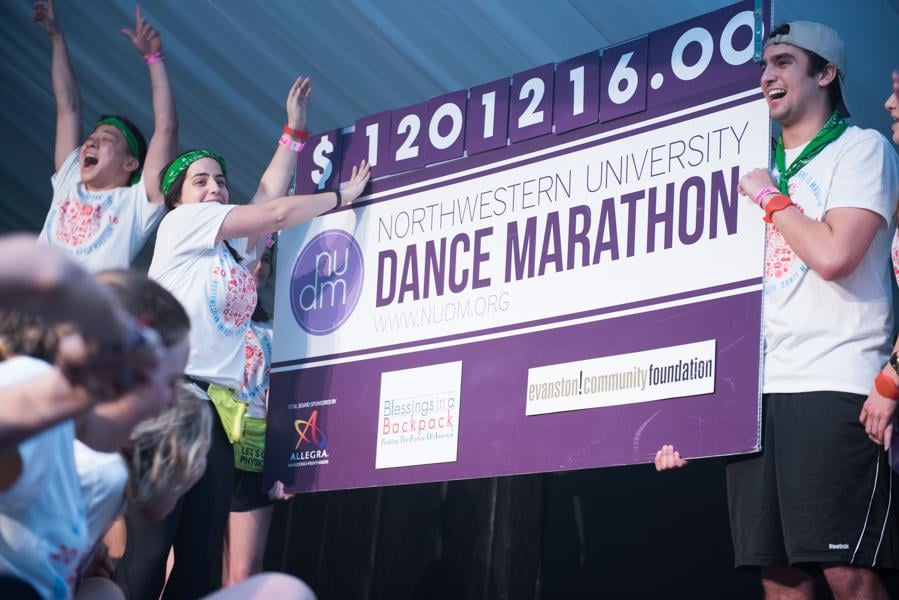 Catherine Whicker’s childhood home was a trailer near a set of Indiana railroad tracks.

Whicker, her two siblings and her single mother relied on governmental aid to put food in their stomachs and sometimes didn’t even have water to drink because of rust.

“We had to go to school with dirty hair and dirty clothes,” Whicker said. “A lot of times we struggled with having enough food. There are a lot of families that struggle like this.”

Whicker, who now works with Blessings in a Backpack, spoke to dancers about her experiences with food insecurity and the kind of impact the primary beneficiary has on children. The organization provides weekend meals to students who would otherwise not necessarily have food for 65 hours.

A check for $920,057 was presented to Blessings in a Backpack — the second-largest donation to a primary beneficiary ever. As the final number was revealed, dancers broke into tears, hundreds of balloons fell from the ceiling and a live, acoustic version of “Save the World” by Swedish House Mafia played.

DM executive co-chairs Arielle Miller, a Medill senior, and Kevin Harris, a Weinberg senior, also announced students spent 830 hours volunteering and packed more than 12,000 backpacks of food for Evanston elementary school students. The donation to Blessings in a Backpack will help more than 9,150 children, providing for more than 349,000 meals, Miller and Harris said.

“By being here in this tent, you are showing families in need that Northwestern will not be complacent,” Harris said. “We will stand up for them.”

Blessings in a Backpack CEO Brooke Wiseman addressed the dancers following the presentation of the checks. Wiseman thanked those involved for their support of her organization and emphasized the impact of the funds raised.

“This is going to make a magnificent difference in the lives of children across this country and we will never forget it,” she said. “You’re hooked to us for life.”

Delta Gamma president Sophie Bartolotta, a Medill junior, said it was an incredible experience benefitting an organization that would help children in Evanston.

“I’m so excited — this was a year-long effort that took a lot of teamwork and reaching out to family and friends,” said Bartolotta, who participated in DM for the first time. “It wasn’t a surprise that we won, but it was a surprise by how much we beat our old record. … Last year we raised around $141,000.”

As the 30-hour marathon came to a close, Whicker reminded the more than 1,000 dancers and committee members why they took up the cause in the first place.

“Blessings in a Backpack isn’t just about food,” she said. “It’s about hope.”